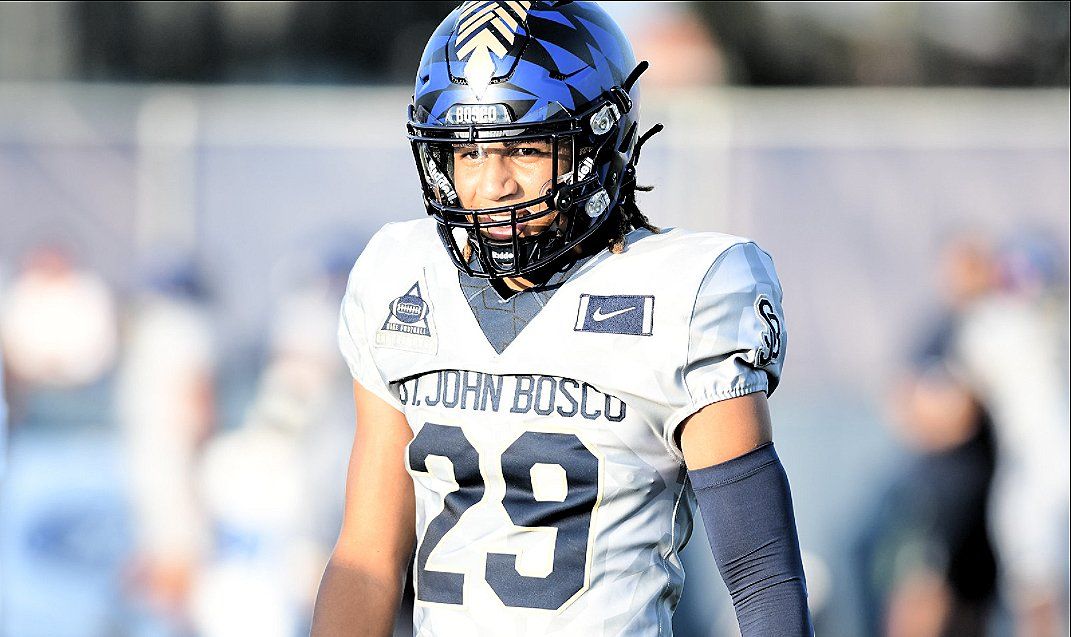 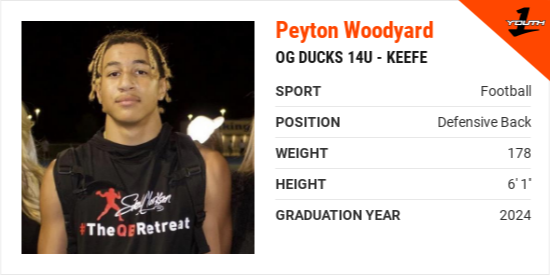 Class of 2024 defensive back Peyton Woodyard has become one of the most sought-after prospects in the nation over the past year. Woodyard, a 6-foot-2, 188-pound safety out of California, is already being courted by over 15-plus Power 5 teams. Alabama, Georgia, LSU, Michigan, Notre Dame, USC, and Penn State are among his offers. He plays for St. John’s Bosco (California), one of he top five teams in the entire country. Woodyard is battle-tested as SJB plays a national schedule and plays against top-notch opponents every week. He has made 32 total tackles (18 solo), caused and forced a fumble, and deflected one pass in his first five games.

Woodyard took time out of his schedule to talk to Youth1 about a number of things including his recruitment, his season, his hobbies, and more!

Ed O’Brien: What age did you start playing football and what was it that got you interested in the sport?

Peyton Woodyard: I started playing football at an extremely early age. Initially it was flag football at 4 years old with the Fullerton Titans and my father was the coach. My father played football at Long Beach State University as a wide receiver and he got me interested in playing not only football but other sports as well. My older brother and sister are both athletes and I come from an athletic family.

Ed O’Brien: What are the positions that you’ve played up to this point?

Peyton Woodyard: I have played running back, wide receiver, cornerback, Nickelback and safety. I have also returned punts on special teams.

Ed O’Brien: What are some things that you’ve learned from the game of football that you apply to your everyday life?

Peyton Woodyard: Football is a team oriented sport and requires a lot of time and dedication. Football has taught me the value of diversity and it has forced me to think of others before myself. I have to be organized and disciplined in order to stay eligible to play so I study in the classroom just as hard.

Ed O’Brien: What are some things that you worked on during the offseason that helped you prepare for this season?

Peyton Woodyard: . I am fortunate to have the ability to train with Jason David from STARS Training Facility, Who has taught me the intricate details of my position. I have also been able to train with college and professional players, which has sped up the learning curve for me. I have some great coaches at Bosco, such as Coach Trudell and Coach King that coach me hard and hold me accountable to do my job. I also play baseball, which has helped me in football because I have no problem tracking balls when it is in the air.

Ed O’Brien: What college teams did you watch growing up?

Peyton Woodyard: I watched Alabama football growing up, because my father was born in Mobile Alabama and he is a big fan of Alabama. I am a big fan of all colleges and I love watching great games in general.

Ed O’Brien: How is your season going so far?

Peyton Woodyard: St. John Bosco football team is having a great year so far and I am fortunate to be able to contribute to the success of the team.  We have a lot of work to do and hopefully we can continue to have success on the field.

Ed O’Brien: How does it feel to get offers this early in your high school career?

Peyton Woodyard: I am humbled and blessed to be getting offers, but I know I have to continue to work in the classroom and on the field. Offers are nothing if you don’t have the grades to take advantage of them once you are able to commit.

Ed O’Brien: What are some things that you like so far about the college football recruiting process?

Peyton Woodyard: The recruiting process has been fun because it has allowed me to really get to know the coaching staffs at the various schools. I’m looking forward to visiting more schools after the seasons over, but my main focus is my current season with St John Bosco.

Ed O’Brien: What is your favorite hobby?

Peyton Woodyard: My favorite hobby is playing the ukulele and I love playing golf. In my free time you can find me on a golf course somewhere

Ed O’Brien: What is your favorite subject in school?

Peyton Woodyard: My favorite subject in school is religion, because my teacher is relevant and authentic.

Ed O’Brien: What are a few reasons why a college coach should recruit you to their school?

Peyton Woodyard: I am a student of the game and love to compete at a high level. I am not afraid of competition and I will be available, because I take my studies serious in the classroom and on the field. I love to break down film and study not only my game but most importantly my opponents.  I am a complete defensive back that can play corner, slot or both safety positions and  I have a high football IQ.  I play with violence and speed.

He has great body control in shuffle and backpedal and has an explosive closing burst on the throw. Woodyard is very patient and poised while playing the football. He’s willing to charge downhill and attack in run-support. Woodyard has very fluid hips and transitions with size. Excellent size for a safety. Recognizes plays early before the snap which put him in a position to make plays. Looks to punch out fumbles and create turnovers. Sets the tone in the secondary with forceful strikes to dislodge the catch. Has the speed to recover , excellent range over the top. Can play either safety position. Has the motor to pursue ball-carriers from across the field. Great attitude.