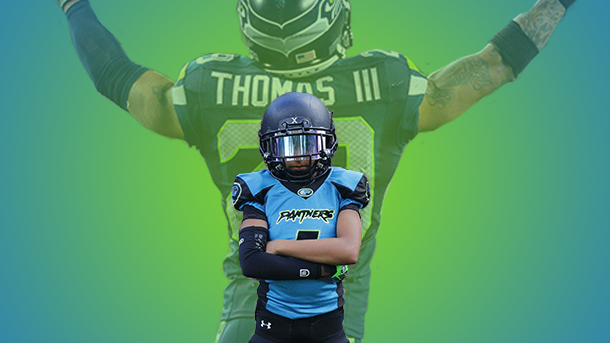 The comparison came to mind almost effortlessly for Vincent Brown.

When the coach of the Gainesville (FL) Panthers was asked to describe the game of Class of 2022 safety Ryan Nolan, a Super Bowl champion popped right into his head.

The 5-foot-1 Nolan played his last three seasons with the Panthers and will spend his last year of youth football with the Gainesville Rattlers.

“He was the Earl Thomas of our defense pretty much,” Brown said. “We knew when Ryan was back there at safety we didn’t really have to worry about much anyone going deep or breaking a long run. He’s a great cover safety. He’s definitely not afraid to come up and deliver big hits whenever needed.”

Nolan says he enjoys playing football because he likes “making a lot of tackles, playing with my teammates and trying to correct my craft.”

As an undersized player, Nolan is driven to be the best he can be to reach his dream of playing in the NFL.

“I just work hard in practice to earn my spot,” Nolan said. “It motivates me.”

Last year, Brown and his coaching staff began to call Nolan “The Pitbull” for his exploits on the field.

Brown gives Nolan the best complete any coach can give: natural football player.

“He has that knack for the ball that you can’t coach,” Brown said. “When it comes to football you can coach positions and teach positions but some kids just have what you would call a natural talent. He’s very football smart.”

Nolan’s speed is a valuable weapon on the defensive side of the ball.

“He’s so quick that he can get his drop and then if it’s a run he can break up and make the tackle. He’s like a little cat back there,” Brown said. “He’s quick and a natural football player that understands the game.”

Nolan is a two-time selection to the Future Stars game for Team Florida. Nolan has also been an FBU Top Gun invite twice and led the Panthers a national runner-up showing in the 2016 UYFL championship.

In 2012, Nolan won an AYF national championship with the Gainesville Rattlers.

All of these recognitions are a testament to Nolan’s development as a player and a leader.

Brown has seen major growth in Nolan in the six years he’s coached him, especially with the prospect’s attitude.

“When I first started out coaching he was one of those guys where if something didn’t go his way he would kind of get down on himself and check out of the game for a couple plays,” Brown said. “I’ve watched him grow to this point to where now that doesn’t bother him. Now if he makes a mistake it’s just on to the next play. He doesn’t let that affect his game at all anymore.”

Brown gives an in-game example of how Nolan has changed for the better. It was in a game at the UYFL nationals. The opposing team’s running back smashed Nolan out of bounds on one play to set up a short 4th down. However, instead of getting upset at himself, Nolan made the running back pay on the next play.

“The old Ryan would have checked out,” Brown said. “But on the very next play on 4th and 1, he hit him in the legs and dropped him. That was a key play that helped us win the game.”

It’s plays like that which makes Brown think of Earl Thomas when talking about Nolan’s game.

“He’s not a big kid,” Brown said. “But just like Earl Thomas you can’t overlook him because of his effort, leadership and tenacity. Those are things you can’t replace.”

That leadership is something that Brown is extremely proud of. Nolan has transformed into a more understanding teammate.

“I can remember when if somebody else made a mistake the reaction would not be a positive reaction. At this point that he’s at now, he’s grown to be a natural leader,” Brown said. “Now if somebody makes a mistake he’s slapping them on the butt and telling them ‘Don’t worry about it. Go get ‘em on the next play.’ He’s matured and grown so much in the time that I’ve coached him. It’s insane.”

Nolan explains his approach to be a good teammate.

“I just do what’s right when it comes to working at practice and when people aren’t doing what they’re supposed to do I get them to focus,” Nolan said.

Nolan gives a lot of credit to his coaches for challenging him off the gridiron as well.

“They help me understand that it’s not just about football,” Nolan said. “Football helps you to be a better person in life.”

Nolan trains with Keiwan Ratliff, a former Florida Gators defensive back who went on to spend seven seasons in the NFL.

Ratliff is blown away by Nolan’s adaptability.

“The thing I love about Ryan is how he can take in information and go out and do it,” Ratliff said. “A lot of kids you can try to tell them things to work on and they’re so stuck in their ways with their muscle memory that they may do some things that you don’t like but don’t even realize they’re doing them.”

Ratliff warns against anyone underestimating Nolan on the field.

“He’s a nice kid by nature. He’s a kid that always wants to see his teammates succeed,” Ratliff said. “Once he gets between those white lines that’s when the animal comes out. He’s a guy that understands when and where to be mean.”

Having played the game at the highest level, Ratliff’s words carry weight when he discusses the possibilities for Nolan.

“The sky is the limit. The kid’s technique and knowledge of the game is better right now than some of the guys going into their senior year of high school,” Ratliff said. “If he continues to build off of what he’s doing right now then he’s well on his way.”