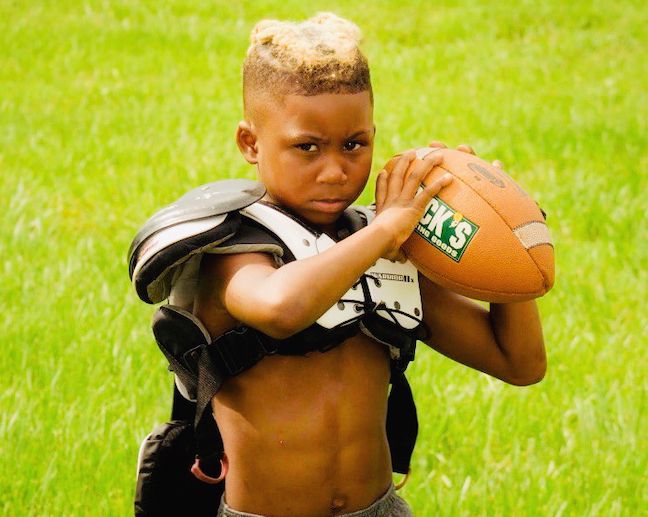 Masiah McGee is one of the best players from the Orlando, FL area in the Class of 2032.

The 48-pound McGee, who attends Central Ave Elementary, is a dynamic player that works as a running back and linebacker. 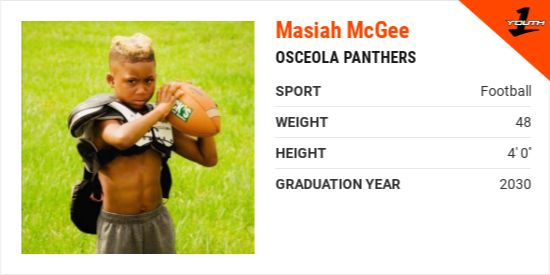 McGee has earned plenty of recognition during his career, such as playing in the Elite All American Showcase 6U.

McGee is humbled by the accolade.

“It means the world to be recognized for those things because that means there are people out there watching me and all the work I put is paying off,” McGee said. “I really enjoyed myself at the Elite All American Showcase that was held in central Florida this past year in January. It was super cool to play with other elite 6U players. I love going to events like this. I make a lot of new friends.”

No matter the opponent, every game McGee is determined to give it his all.

McGee is going all out.

The motor is always at full throttle whenever McGee steps between the lines.

“My mindset when I play RB is that I’m looking to score every time I touch the ball. But when I’m not getting the ball I make sure I make the best block on the field,” McGee said. “And when I play LB I’m trying to make all the tackles on the field.”

McGee has great passion and energy whenever he’s on the field. McGee tells why he enjoys the game of football so much.

“I just love being around other kids and playing football,” McGee said.

McGee has learned many valuable lessons from playing football that he applies to his everyday life.

“Football has taught me how to deal with things when they get hard,” McGee said.

“My favorite memory is when I score touchdowns,” McGee said. “But also when me and my dad are training.”

McGee takes his role as one of the leaders on the team very seriously. McGee makes sure he’s a daily positive influence on his peers.

“I demonstrate being a good teammate by always being a leader during whatever we’re doing. Showing my teammates that they can count on me,” McGee said. “The best advice I give is whatever you do, just try your best.”

McGee is appreciative of having amazing male role models that are supportive.

“I’ve learned that you can’t never give up. Just try a little harder,” McGee said. “The best advice I’ve gotten is that if I play my game at my level I can’t be stopped.”

McGee patterns his mentality after this talented athlete.

“Even though I’m a RB, Odell Beckham Jr. is my favorite player,” McGee said. “I even dyed my hair blonde because of him.”

McGee lists math as his favorite subject in school.

“I love to deal with numbers and it comes easy to me,” McGee said.

McGee explains his collegiate aspirations down the road.

“LSU because of Odell Beckham Jr. and I like their colors,” McGee said.

McGee is striving for greatness in all that he does.

“My goals for on the field are to win the Super Bowl and win the 6U Heisman award for my league,” McGee said. “Off the field I just want to be a better big brother and friend.”