Jackson Corbin is a talented two-sport player to be on the lookout for in the Class of 2027.

The 5-foot-2, 108-pound Corbin plays as a running back and defensive back on the football team and as a point guard on the basketball team at Kettle Moraine Lutheran. 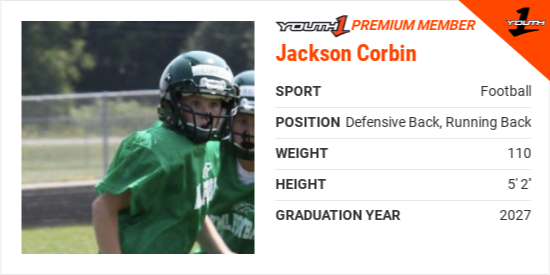 Whether it’s on the gridiron or the hardwood, Corbin is always determined to dominate.

“At running back, my mindset is to be patient, then hit the holes quickly. Once I am in the open field I hit another gear of speed to assure a long run. As a safety, I can’t play as aggressive as a linebacker would. I have to play passive first since I’m the safety valve, but once I read a run then I can attack the ball carrier,” Corbin said. “As a point guard I must involve my teammates and get them in the game. I must take leadership when my teammates are down. It is the point guard’s job to make teammates believe in themselves as well as their team.”

Corbin shares his favorite moments as a football player and basketball player.

“Fifth grade in Week 1, I had  3 TDs, 150 rushing yards, and 100 receiving yards,” Corbin said. “Being ranked by USBA as a team 12th in the country and being coached by my dad is my favorite basketball memory.”

Corbin describes what he enjoys the most about playing football.

“On the football field what I love the most is hitting people,” Corbin said.

Corbin has been passionate about both sports for quite some time.

“In 4th grade, I played up a grade for the 5th grade team and even earned a starting QB position,” Corbin said. “I started practicing basketball as a toddler, but I have been playing games since kindergarten.”

Corbin is a positive teammate who tries his best to demonstrate leadership.

“After football conditioning, I would go back and run with the slower kids and cheer them on,” Corbin said. “I would hype them up and give them confidence.”

The best advice Corbin has received is from his dad, who provided some keen words of wisdom.

“One thing my dad has said that I use a lot is ‘Next one goes’.  Which means to not worry about what just happened, focus on what’s next. Also to play with joy,” Corbin said.

“Playing sports teaches you to work as hard as possible to be great at what you do,” Corbin said.

Corbin previously attended the Chris Paul Middle School Combine and gained a lot of confidence from the event.

“I learned where I was as a basketball player and after the fact, I was very motivated to crush my competition in all ways possible,” Corbin said.

Corbin models his game in both sports after some of the best at his positions.

“The players I look up to would be Dalvin Cook at running back, Harrison Smith at defensive back, and Damian Lillard at point guard,” Corbin said.

Corbin is dedicated to improving as a player. Corbin explains some things he does to hone his skills.

Corbin lists math as his favorite subject in school because he loves numbers.

Corbin has his collegiate sights set on playing in the Big Ten.

“My top choices would be Michigan State, Minnesota, and Northwestern,” Corbin said.

Corbin knows many players have the same dream as him but he believes he has what it takes to be successful.

“What makes me different is my work ethic and character,” Corbin said.