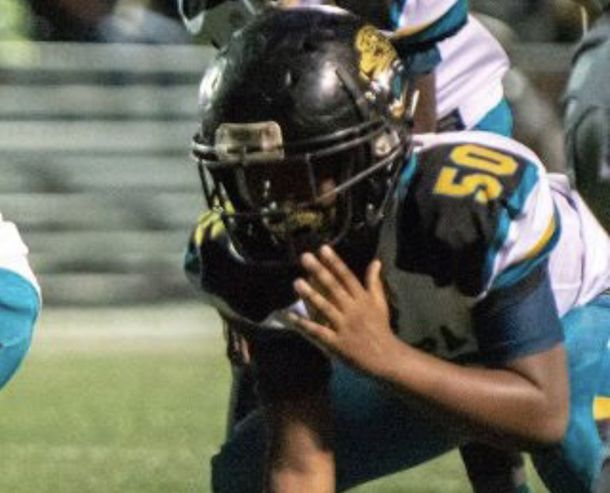 Willie Williams is one of the best players from the Tampa, FL area in the Class of 2025.

The 5-foot-4, 132-pound Williams is an imposing player that works as a defensive and offensive lineman for the Tampa Bay Jaguars.

Williams has earned plenty of recognition during his outstanding youth football career, such as earning the Hardest Hitter Award in 2016.

“The recognition means a lot to me because I’m getting rewarded for my hard work,” Williams said. “I haven’t had a pleasure of being an all-star as yet, but being with the Jags and showing my skills I’m hoping to make it.”

No matter the opponent, on each snap Williams is determined to give it his all.

“On defense my mindset is to not worry about who is in front of me, just worry about the ball. On offense: “Pancakes!” Williams said. “I want to make the opponent have to work for everything they get.”

Williams has great passion and energy whenever he’s on the gridiron. Williams tells why he enjoys the game of football so much.

“What I love most about football is hitting and hearing the crowd’s reaction,” Williams said. “I also enjoy the brotherhood with my teammates. There’s nothing like being in the locker room after a win.”

“Football has taught me so much about life in general,” Williams said. “It taught me to be more disciplined in things that I do.”

“Playing against the Packers, I hit a kid so hard I broke my face mask,” Williams said. “That was a moment I’ll never forget.”

Stephon McDowell is in his first season coaching Williams for the Tampa Bay Jaguars organization.

“The best part of his game on both sides of the ball is his high motor and his passion to make a play. Strong at the point of contact, can move anyone out the way, also defensively he cannot be blocked one on one. He is the type of player you have to game plan around,” McDowell said. “His technique is good, perfect hand placement, good take off, as well as strong at the point of contact. Most importantly in the fourth quarter, when the game is on the line is everyone is tired, Diggy (CJ) will always rely on technique to get the job done.”

“I try to uplift my teammates’ spirit whether we are winning or losing,” Williams said. “When a teammate was being dominated in practice, I showed my teammate what to correct and when they used it, it worked.”

McDowell adds that Williams is one of those consummate teammates that every squad needs to be successful.

“He demonstrates leadership, from his work ethic. He’s not much of a talker, but will show up and give you everything he has play after play,” McDowell said. “From the first play to the last. Having kids like him on your team pushes the rest of the team to step there game up as well.”

“I’ve learned a lot from my coaches on how to be a better football player and a better person off the field,” Williams said. “I’ve learned to control my emotions on and off the field and to use my technique instead of my strength all the time.”

McDowell is an advocate of Williams’ capabilities.

“One of the biggest plays he has made for us this season, would have been the game vs. the West Tampa Spartans,” McDowell said. “On the defensive side of the ball, he was a monster, could not be blocked. He made play after play for us, and played the whole game on both sides of the ball. This game went to overtime, and Diggy stepped up and made a big tackle for us to get the goal line stop.”

In addition to making clutch plays, Williams also has a high level of football IQ as well.

Williams has excellent football awareness that puts him in position to thrive.

“He’s an intelligent player that puts trains and studies to get better,” McDowell said. “He’s constantly looking at film for ways to improve.”

Williams is on the grind to perfect and hone his craft in any way possible.

“Diggy (CJ) work ethic is great,” McDowell said. “He’s the type of kid that will just work and doesn’t complain. The type of work ethic you can tell starts in the household at home. He shows up does his job and will give you 100 percent play after play.”

McDowell explains why he compares Williams to this player.

“He’s a lot like Aaron Donald from the Rams,” McDowell said. “They have a similar type of game, both refuse to be block and will cause havoc, and are high motor players.”

Williams patterns his play after this standout.

Williams is constantly striving for greatness in everything that he does.

Williams has his sights set on becoming a Michigan Wolverine.

“They have an amazing football tradition there and I want to be a part of it,” Williams said. “To win a national title at Michigan would be very special.”

Williams lists math as his favorite subject in school.

“It comes easy to me and it’s an important subject for the real world,” Williams said.

McDowell outlines the next areas of improvement for Williams.

“Some area of improvement would be for him to work on his speed and quickness,” McDowell said. “Once he adds that to his game, he will not be stopped.”

McDowell believes the sky is the limit as long as Williams continues to stay hungry.

“His potential is extremely high, he has the size, technique and the drive to be one of the best to ever play this game,” McDowell said. “He’s a great kid and works just as hard in the book as he does on the field. I fully expect Diggy to succeed in life no matter what ho chooses to do.”