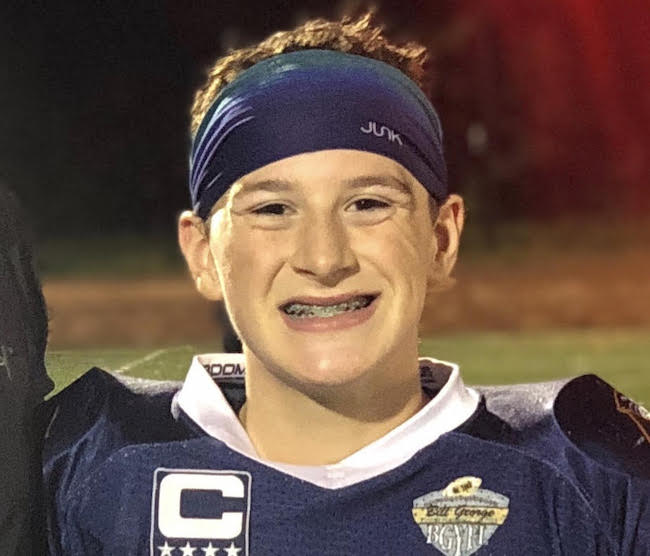 Charlie Cruse is one of the best players from the Downers Grove, IL area in the Class of 2025.

The 5-foot-9, 137-pound Cruse, who attends Herrick Middle School, is a dynamic player that works as a defensive end, running back, wide receiver, tight end, kicker and punter. 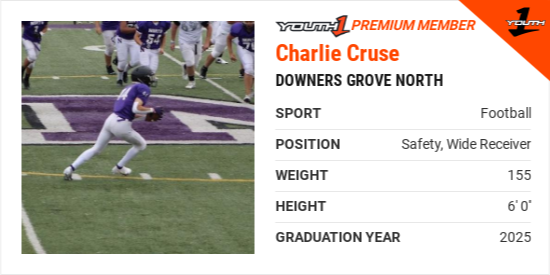 Cruse has earned plenty of recognition during his career, such as:

“Being voted team captain to me was the biggest honor of them all.  This wasn’t about a popularity contest, it was about leadership.  I have played with the same group of players, these are my buds. These are the guys that have my back both on and off the football field.  If they vote to have me lead them on the field, I am gonna lead them. If they need me to pick them up when they are down on themselves, I’m gonna do it.  The other awards and events were amazing experiences, but I don’t think I need a trophy to tell me I’m one of the best. Those are individual awards.  When your team and your coaches believe in you, that’s the best recognition I could ask for,” Cruse said. “Being surrounded by players from all different teams that love the sport as much as I do is pretty cool. These are players who I’ve competed against all season long.  We are a competitive team and a competitive sport, so being able to be a part of events like this where we can have some fun, cheer each other on, all while representing our home team is pretty awesome.”

In 2019, Cruse attended the Best of the Best showcase in Illinois and this February was at the NexGen Regional Showcase in Detroit.

No matter the opponent, every game Cruse is determined to give it his all.

Cruse is going all out.

The motor is always at full throttle whenever Cruse steps between the lines.

“My mindset is to work my hardest, go full out and no one can stop me,” Cruse said.

Cruse has great passion and energy whenever he’s on the field. Cruse tells why he enjoys the game of football so much.

“I’ve loved playing football since 2nd grade. I was a right guard. Looking at my size, you would not guess I was a striper. I couldn’t carry the ball due to weight. But I could beat everyone at the 40 yard dash. All I’ve ever wanted to do was score touchdowns. I was a really good lineman. I could block. From 2nd through 6th grade I continued to play the line. Last season at registration I stepped on the scale and realized I was no longer a striper. I could finally make those touchdowns,” Cruse said. “It’s what my coach wanted me to be able to do since I started. He wanted it for me as much as I did for myself. He specifically made plays for me and I ended the 2019 football season with 14 touchdowns in 10 games. Together as a team we made it to the Super Bowl. I wasn’t sad that we lost the Super Bowl last season, I was sad the season was over. It was the most fun I’ve ever had playing the game.”

Cruse has learned many valuable lessons from playing football that he applies to his everyday life.

“You have to follow through. Nothing comes easy in life,” Cruse said. “Work hard, be disciplined and give it your all in every part of your life.”

“As a team we made it to the Super Bowl twice,” Cruse said. “It wasn’t easy but we did it as a team and we made so many memories leading up to it.”

Cruse takes his role as one of the leaders on the team very seriously. Cruse makes sure he’s a daily positive influence on his peers.

“I like to make sure they all know that even if they aren’t making the touchdown, they helped or played a part in making it happen. As a team, everyone plays a part,” Cruse said. “The best advice I give is don’t get down on yourself, keep your head up and focus. There’s plenty more plays to be made.”

Cruse is appreciative of having amazing male role models that are supportive.

“I have 3 awesome coaches. Coach Waughop was my first football coach. When I got the wind knocked out of me, he encouraged me to stick with it and power through. He was the reason I came back year after year cause having a bad coach can ruin a sport. Coach Lansu has taught me if you work hard you can accomplish anything. Every day, every play, work hard and then work harder. He has given me an opportunity to grow as an athlete all while having fun and enjoying the game. There’s only one other person who supports me and believes in me and as much as Coach Lansu, that’s my Dad, Coach Cruse. I’m thankful to have my Dad coach our team. He coaches our lineman, whose job it is to protect me and to have my back. Funny how he’s showing them to do on the field exactly what he does for me, off the field,” Cruse said. “The best advice I’ve gotten is that warmups are important. If you warm up poorly, you’ll play poorly. Show up and be ready to work.”

Cruse patterns his mentality after this elite wide receiver.

“My favorite player is wide receiver DeAndre Hopkins,” Cruse said. “He has really good hands and I want to handle and run the ball as well as he does.”

Cruse lists science as his favorite subject in school.

“We have so much fun with all the different experiments that we get to do,” Cruse said. “ I like the classes that are hands-on.”

“Since I was 4 years old I’ve wanted to go to Notre Dame,” Cruse said. “But I’d love to represent any Big Ten or Ivy League schools.”

“I play full time travel baseball for the Downers Grove Longshots. We work out all year long doing physical development and conditioning,” Cruse said. “I also take classes at our local UFC gym. Being a multi-sport athlete has really helped me keep my body moving all year long.”

Cruse is striving for greatness in all that he does.

“I’m really excited about high school. I want to go to a school that will provide me with the best education and has a solid football reputation,” Cruse said. “These are what will pave the way for me to hopefully play football for a D-I college.”

Cruse describes what he believes separates himself from the pack.

“This is a hard question because there’s so many incredible athletes I watch. Many faster than me, many more disciplined than me and many that might be a better leader. I’m working at being better at that every year but I think if I had to pick something I’d say that being a lineman for my first 5 seasons gave me strength and power, especially in my leg,” Cruse said. “Combine that with speed, it has allowed me to help get those 14 touchdowns in 10 games. You have to be a fast runner to catch what my QB, Owen Lansu throws!”