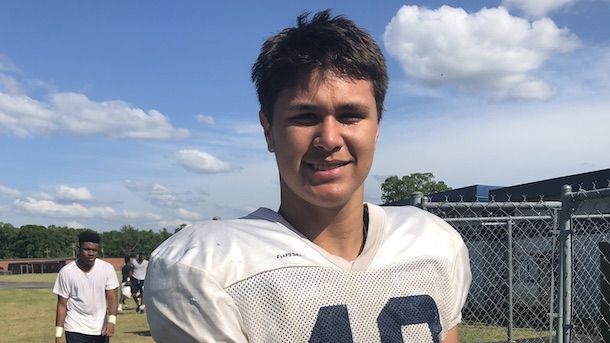 Camden Kopsick is one of the best players from the Atlanta, GA area in the Class of 2023.

The 5-foot-10, 185-pound Kopsick, who will attend Northside High School, is a dynamic player that works as a linebacker.

Kopsick has also played as an offensive lineman.

Kopsick recently earned an invitation to participate in NextGen's invite-only main event, The Show based on his stellar showing at the NextGen Atlanta Regional Showcase.

“I was extremely proud and blessed to receive an invite.  I didn’t know a lot about The Show but now I do,” Kopsick said. “I am very thankful to have the opportunity to showcase my skills at IMG in FL.”

This will be Kopsick’s first time competing at The Show and he’s excited to leave a positive impression.

“I haven’t been invited to The Show before,” Kopsick said. “I am looking forward to competing with the other players across the county and excited to see the IMG campus.”

Kopsick has received plenty of recognition during his outstanding career, such as: three-time FSG selection and eighth grade MVP for his middle school team.

Kopsick describes his strengths as a linebacker.

“My strengths include my aggressiveness, my strength, and my smarts on the field,” Kopsick said.

Kopsick explains why he’s drawn to the linebacker position.

“I love how smart you must be to play linebacker,” Kopsick said. “It’s not all just about if you can hit hard but if you can read the play and lead your team.”

Kopsick has great passion and energy whenever he’s on the gridiron. Kopsick tells why he enjoys the game of football so much.

Kopsick is pleased with his progress but refuses to allow complacency to set in. Kopsick is on the grind to perfect and hone his craft in any way possible.

“I really need to improve on my speed and footwork. I’m going to work on my speed the most,” Kopsick said. “I believe I am getting faster and stronger every day.  ’m going to speed training a couple times a week.  My speed coach, Coach Mark Taylor, really gets me in shape physically and mentally.”

Kopsick, who participated in spring ball with his high school team, is preparing for his upcoming slate.

“The next month is full of football camps,” Kopsick said. “In the next month, I’m going UGA, TN, and FL. I’m also going to LaGrange College for their upcoming showcase.”

Kopsick patterns his play after this rookie linebacker.

“I really look up and want to model my game after Devin White, who just got drafted by the Buccaneers. I attended LSU’s football camp last summer and was privileged to meet him,” Kopsick said. “He is a straight beast.  He brings it every play. He is not only aggressive and physical but fast. To have all those skills is a deadly combo.”

Kopsick is ready to seize the moment and make a name for himself at The Show.

“I am beyond excited to compete against the best of the best,” Kopsick said. “It shows me that if I’m determined I can do anything.  It gives me hope that better things are yet to come.”