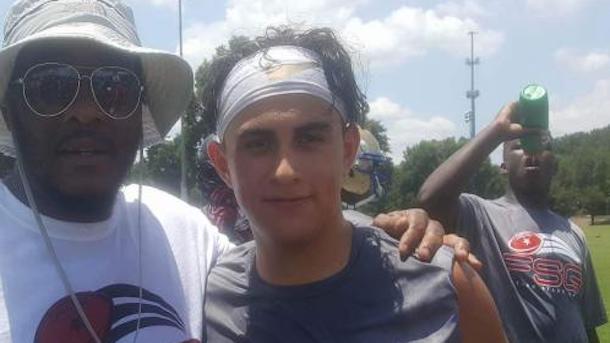 Among the most talented youth linebackers in the nation is 2022 LB/RB Carlos Cervantes. The Marietta, GA native has a growing reputation for his abilities on the football field, where he specializes in wreaking havoc on opposing offenses.

Cervantes stars as the starting MLB for the Osborne JR Cardinals, Team Georgia of the Future Stars Game, and GMSAA's FBU Team. Linebackers, middle linebackers especially, are the leaders of the defense. The 5’9 175 pound athlete serves as the defensive leader of his teams and thrives in that role.

"I enjoy the competition, the game, winning, and the brotherhood," Cervantes said of his favorite part of playing football.

"At running back, I love scoring touchdowns to help my team win. At middle linebacker, I love to be aggressive and delivering hard hits and love tackling the QB."

Using his ability to diagnose plays quickly, Cervantes hunts down quarterbacks and ball carriers with ease. Run in his direction and he'll quickly shoot the gap to make a play on the ball carrier. Once he gets his hands on the ball carrier, there's little hope of breaking free. Cervantes plays through the whistle as he prides himself on finishing tackles with tenacity.

On offense, Cervantes runs the ball with power. Once he gets moving down field, he’s hard to get a hold of. He's not afraid of laying down the wood on any wimpy tackler that attempts to bring him down.

"My strengths include my speed as I am a sideline to sideline linebacker and I can close off the edges very quickly. I also feel as if I am a very strong power running back. Once I see a hole I feel like I will score just because I know I am fast," Cervantes said.

Cervantes has spent much of his offseason working to improving his game. He has attended a bunch of notable camps including the Future Stars Game, Team USA, Iron Sharpens Iron, and V7 Elite Showcase Series camps. He's also been working hard in the gym.

"The way I prepare for them is during the offseason I workout at the gym lifting weights with my dad as well as I run track to keep me in shape and to hopefully just get faster and stronger," Cervantes said.

"I feel like I am learning as I am growing by attending as many summer camps and off season camps as possible and learning from a wide majority of coaches to expand my game," he added.

Success on the football field has become the norm for Cervantes as he serves as captain of the defense for every organization/team he plays for. This is a testament to how much his peers believe in both his skill and leadership. After an impressive 7th grade season scoring 21 touchdowns in 7 games, Cervantes is pushing himself for an even better 8th grade season.

As he works hard to become the best player he can be, Cervantes has identified areas of his game he's striving to improve upon.

"My speed as I want to close gaps faster and to constantly be a force in the backfield. As well as my tackling," Cervantes said.

"I want to work on reading offenses and their formations so that once I see a certain formation I will know how to react."

With his 8th grade season directly in front of him, LB/RB Carlos Cervantes is looking to continue his impressive play while showing the world he's a top prospect from the class of 2022. With his combination of leadership, talent and dedication to the game, the sky is the limit.

For more on Carlos Cervantes check out his Youth1 Player Profile --> here.