2019’s Kevin Smith wants to be the next Darren Sproles

2019’s Kevin Smith wants to be the next Darren Sproles 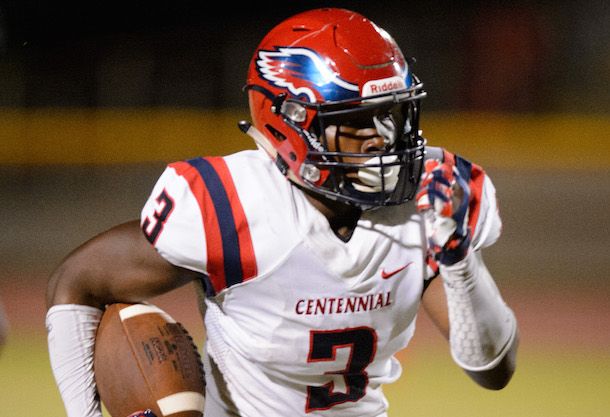 Kevin Smith is one of the best players from the Port St. Lucie, FL area in the Class of 2019.

The 5-foot-8, 170-pound Smith, who attends Centennial High School, is a dynamic player that works as a running back.

Smith has earned plenty of recognition during his outstanding career, such as JV Offensive Player of the Year and Varsity Most Versatile Player.

“It means that my coaches recognized the hard work and dedication I have towards the game of football,” Smith said. “It makes me want to continue to get better each day.”

No matter the opponent, on each snap Smith is determined to give it his all.

“My mindset at my position is to do anything I can to help my team be successful,” Smith said. “I want my opponent to have to earn everything they get. I refuse to give anything less than my all.”

Smith has great passion and energy whenever he’s on the gridiron. Smith tells why he enjoys the game of football so much.

“Nothing compares to the adrenaline rush when you step onto a football field,” Smith said. “There’s nothing like being in the locker room celebrating with your teammates after a win.”

Smith has learned many valuable lessons from playing football that he applies to his everyday life.

“Playing football has taught so much about life in general,” Smith said. “You must always give a 110 percent because sometimes you don’t get what you earned, you get what you fight for.”

“Winning Most Versatile Player my junior year because it was my first year on varsity and my coaches trusted me to do a lot for the team,” Smith said.  “It was a special memory that I’m never going to forget.”

Trey Page is in his second season coaching Smith for Centennial High School.

“He’s one of those dudes where you’ll see him run and not do anything really flashy or over the top but at the end of the play he’ll end up with four or five yards. He’ll keep going each play and beat you down until he breaks free for a long run,” Page said. “He’s really smart. He knows where the hole is going to be at. He has good patience and vision.”

“I set an example by being at 110 percent during practice, pick up my teammates when they need it and even help them out with their schoolwork,” Smith said. “The best advice I give is the classroom is just as important as the film room.”

Page adds that Smith is one of those consummate teammates that every squad needs to be successful.

“Smitty is one of our best special teams players and he’s always helping our young guys out. Sometimes I’ll stick a young guy with him and tell him he’s coaching him for the game. That’s real big for us,” Page said. “Another thing is he has one of the highest GPA’s on the team, so he a great example in the classroom.”

“I’ve learned many things from my coaches about being a better player and person,” Smith said. “They’ve taught me that nothing is given and everything is earned. So I must always bring my A-game.”

Page is an advocate of Smith’s capabilities.

“This year we were playing Westwood and on his first two carries he got three or four yards then the next one he busted for like 50 or 60 yards to put us in the red zone,” Page said. “It helped us take over that game.”

In addition to making clutch plays, Smith also has a high level of football IQ as well.

Smith has excellent football awareness that puts him in position to thrive.

“When he’s in pass protection he knows where the blitz is coming from to keep the quarterback from getting hit. He always knows where he needs to be when he’s in his pass patterns,” Page said. “He brings a lot to our passing game.”

Smith is on the grind to perfect and hone his craft in any way possible.

“He’s one of those guys that isn’t going to let anyone outwork him,” Page said. “He was dealing with a turf toe injury over the summer and it took a lot to keep him from doing stuff in the offseason to heal up. He always wants to work.”

Smith patterns his style of play after this standout at his position.

“I look up to Darren Sproles because he’s a smaller player like me and relied on his shiftiness to last many years in the NFL,” Smith said. “He’s always dangerous and a threat whenever he’s lined up on the field.”

Smith is constantly striving for greatness in everything that he does.

“My goal on the field is to do whatever I can to help my team win whether I’m running the ball, blocking for a teammate or making tackles in special teams,” Smith said. “My goal off the field is to be a well-rounded person who respects his elders and looked up to by his peers.”

Smith has his sights set on becoming a FAMU Rattler.

“My dream college to play at is FAMU because both my parents went to a HBCU,” Smith said.

Page outlines the next areas of improvement for Smith.

“When your time comes you’ve got to make the most of it. That’s what I always preach to him because we have Cedrick Wilcox. He’s been very receptive to that and he’s made some big plays for us with a small amount of opportunities. He’s a spark plug for our offense. He’s just a really tough running back that dudes don’t want to tackle. He’s pretty hard to tackle. Him and Wilcox are one of the best combos in the area.”

Page believes the sky is the limit as long as Smith continues to stay hungry.

“I think Kevin can go play at a Division I FCS school or Division 2,” Page said. “He brings a lot with his grades and talent. It makes him an attractive target for colleges.”