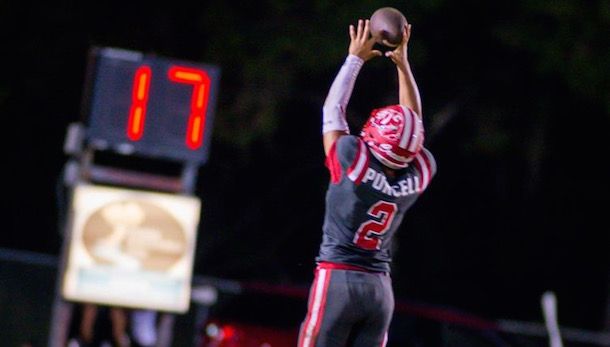 D’Marcus Purcell is one of the best players from the Crestview, Florida area in the Class of 2019.

The 6-foot-2, 187-pound Purcell, who attends Crestview High School, is a dynamic player that works as a safety.

Purcell, who is committed to playing basketball at Samford, has received plenty of recognition during his outstanding career, such as being an All-State and Dandy Dozen selection.

Purcell is humbled by the accolades and the chance to showcase his skills.

“It means a lot to me that I have achieved all these goals, but I couldn’t have done it without my teammates and the coaches that have all coached me,” Purcell said. “It makes me want to work hard to continue to get better.”

No matter the opponent, on each snap Purcell is determined to give it his all.

Purcell is going all out.

The motor is always at full throttle whenever Purcell steps between the lines.

“My mindset is stay deep and let nothing behind me. I want to prevent the other team from scoring,” Purcell said. “My goal is for the opponent to have to work hard for anything they get.”

Purcell has great passion and energy whenever he’s on the gridiron. Purcell tells why he enjoys the game of football so much.

“The feeling of being on the field and a big crowd gets me going. I love making a big play and having the crowd go crazy,” Purcell said. “There’s no greater feeling than celebrating in the locker room after a big win.”

Purcell has learned many valuable lessons from playing football that he applies to his everyday life.

“Football has taught me so much about life in general,” Purcell said. “It has taught me that there will be hard times but that you have to fight through them.”

“My favorite memory playing football was beating our rival Niceville High School for the third year in a row to secure a third district championship then making it to the Final Four,” Purcell said.

“D’Marcus Purcell played safety for us. The biggest play he made his sophomore year was against Niceville. It was fourth and eight in the plus territory. Niceville threw a shallow cross. It looked like he had an easy first down and Purcell came out of nowhere and tackled him short of the first down marker,” Grant said. “We ran out the clock after that. The score was 27-21 at the time of the play. Saved the game for us and district championship and that started our three years of district championships.

Purcell takes his role as one of the leaders on the team very seriously. Purcell makes sure he’s a daily positive influence on his peers.

“When a play goes bad or wrong always pick up your teammate and when they do something good root them on,” Purcell said. “I’ve told one teammate keep playing no matter what. Things go bad you have to capitalize off of it.”

Grant adds that Purcell is one of those consummate teammates that every squad needs to be successful.

“Purcell leads by example and came to work hard every single day,” Grant said. “His attitude had a positive effect on his teammates.”

Purcell is appreciative of having amazing male role models that are supportive.

“My coaches have helped make me a better player and person. They tell me to always go hard in anything you do all the time and never settle for less. Strive to be the best,” Purcell said. “Go as hard as you can no matter what the result is and at the end of the day you know you did your best.”

Grant is an advocate of Purcell’s capabilities.

“Purcell is a great tackler and has a knack for the ball with 15+ career interceptions,” Grant said. “He had 78 tackles his senior year in addition to four interceptions. We wouldn’t have the success we did without his contributions.”

In addition to making clutch plays, Purcell also has a high level of football IQ as well.

Purcell has excellent football awareness that puts him in position to thrive.

“He made all the calls for the secondary and rolled into the box against 21 personal teams,” Grant said. “He was like an extension of the coaching staff on the field.”

Purcell is on the grind to perfect and hone his craft in any way possible.

“He is always working and learning,” Grant said. “He was the type of player that could roll into the box or play center field safety.”

Grant explains why he compares Purcell to this player.

“I would compare him to Eric Weddle who played for the Chargers and Ravens,” Grant said. “He demonstrated similar traits on the high school level and had a comparable skill set.”

Purcell patterns his athletic mentality after this legend.

“My favorite pro athlete is Ed Reed,” Purcell said. “He was a dog on the field and always played 100 percent.”

Purcell is constantly striving for greatness in everything that he does.

“My goal is to be the best safety I can be and off the field is to be successful in life and graduate college,” Purcell said. “I want to make my family proud of me in everything that I do.”

Purcell explains what drew him to signing with Samford.

“They have a family atmosphere and on my visit I felt really comfortable there,” Purcell said. “I feel like I can come in and make an immediate impact. I already have a great relationship with the coaching staff and I look forward to this experience.”

Purcell lists math as his favorite subject in school.

“I've always been very good at math,” Purcell said. “Most people hate it but it has always been that one thing that clicks with me.”

Grant believes the sky is the limit as long as Purcell continues to stay hungry.

“He was a major contributor to our football team,” Grant said. “I think he will have a great career playing basketball at Samford.”