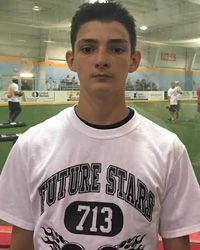 With all the FBU action going on this past weekend, it’s easy to overlook some of the camp award winners, but they all deserve some recognition. That’s definitely the case with FBU Nashville’s Leadership Award winner, 5-foot-10, 130 pound quarterback Zak Acuff.

“I was kind of surprised when they called my name,” the future Christian Academy of Knoxville prospect said. “At the same time though, I was making the effort to congratulate my teammates and encourage them.”

Every position on the football field comes with a certain amount of pressure, but none has it more tough than a quarterback. They have to constantly be vocal to the rest of the team and act as a leader. Acuff, despite his smaller frame and the poor weather conditions, made the most of his opportunities during drills.

“The pressure’s to be expected,” he said. “You have to be aware of everything that the defense throws at you while also reading what’s going on. I wanted to compete and learn something while having a good experience.”

Coaches praised Acuff for his strong arm and his willingness to take direction. He pushed the ball down the field during 7-on-7’s and was always first in line for drills. The competition was stiff, but Acuff felt that it made him step up his game.

“My mentality was to get better as the camp went on,” he said. “The defense I faced was really good, but I didn’t get nervous. I’m used to competition like this.”

While there wasn’t much in the negative category for Acuff, he does want to improve on a couple of things. His non-throwing arm placement could be more consistent and his cadence could also be louder. He has a short turn around on events though, as he’ll be participating in the Kentucky vs. Tennessee Future Stars Game in a next week. Acuff thinks that this camp has sufficiently prepared him for that game.

“When you go into a camp like this, you have to perform and not be lazy,” Acuff said. “You have to learn, pay attention and be a leader. I think this camp has made me a better player in terms of mechanics, reading defense and throwing speed. The competition for both is really tough, so this helped me out a lot.”

Aside from the Future Stars Game, Acuff’s schedule for the rest of the summer is fairly flexible. He’ll be attending the Top Gun camp and also may compete at the NFA Duel in Nashville as well. Outside of those, he’ll mostly take a break from camps and spend the offseason working with his QB coach, former Tennessee University/New York Jets quarterback Erik Ainge.

“I have a lot of people around me to help me improve,” Acuff said. “It takes a village as they say. I try to outwork all the people my age. I’ve been playing since I was 7 and I have a huge passion for the game.”