The culture of football is changing. Participation in Pop Warner youth football leagues has dropped nearly 10 percent over the last four years, with rising concerns over athlete safety. These new apprehensions, while distressing, have given an opportunity to those with knowledge and influence to change the game for the better. 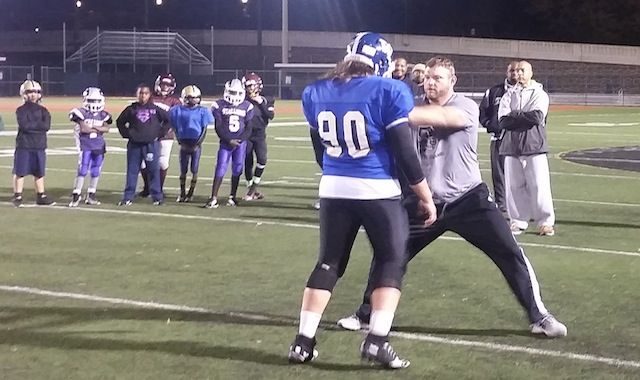 Scott Peters played seven years in the NFL for a variety of teams including the Arizona Cardinals, Philadelphia Eagles and New York Giants. He spoke about the culture of football, as we know it today.

“It’s been rough for people involved with football lately, nobody wants to see kids get injured. The issues with the game right now are relevant and we have to change the way we play. Everybody has to get involved from organizations to coaches, fans and players.”

After retiring from the NFL in 2008, Peters opened the Lions Den and Fight Ready MMA Training Academies in Scottsdale, Arizona. It was there where he perfected the techniques that would become the core foundation for Safe Football. Safe Football is a program, which teaches players and coaches various ways to tackle, hit and play aggressive football while still being able to protecting yourself in game action. In 2012 Peters founded Safe Football with the intent to improve performance on the field while eliminating the head as a tool for contact.

“When I was growing up we were taught to hit with are heads, that’s just the way it was.” Said Peters. “Coaches and players want to win, that’s no secret. We want to implement techniques that keep players safe but also give them an edge over the competition.”

In the 2012-2013 season Safe Football landed their first major job working with the University of Washington. Peters and his staff implemented the Safe Football program with the players, coaches and training staff. The results they attained were shocking even to them. Besides having the best offense in school history, the Huskies training staff reported zero concussions and zero stingers for the entire season. This is a goal all teams at any level would be more than happy to accomplish, proving that being a safe player and being a better player go hand in hand.

Since then, Safe Football has been hired by over 200 high schools, eight NCAA Division I schools and six NFL coaching staffs. There has been a 100 percent adoption rate by coaches trained including Bill Callahan, offensive line coach for the Dallas Cowboys.

With all the cache that comes along with ties to professional and D1 college programs, Peters reiterates that his main goal is to work with youth football organizations.

“We want to impact the game at the grass roots levels. If we can make this stuff common knowledge for kids who are just starting to play, they will retain these skills as they get older.”

Given the success Peters has had in the professional and college rankings, there is no reason why his program should not work for youth athletes. Safe Football and programs similar to it are exactly what the game of football needs right now. The game is under much scrutiny and may not be around for much longer if the safety issue is not addressed. Football is a game that can inspire and bring joy to everyone involved when taught the proper way.