Wisconsin Thunder expects much and delivers a winning program

Wisconsin Thunder expects much and delivers a winning program 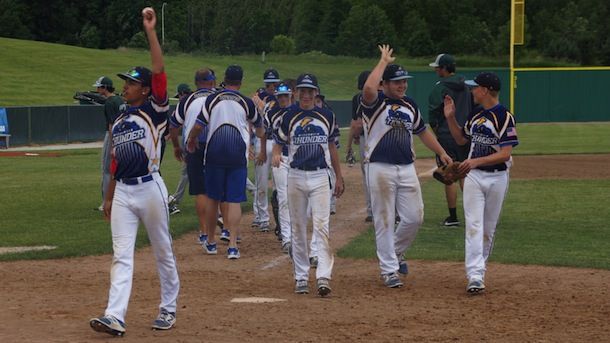 What about the missing headlines? The great applause at home games when your boy delivers a key blow? What about big man of campus? Isn't that where a budding baseball player wants to play? For his high school baseball team?

Those gifted players from the Wisconsin Thunder Travel baseball team no doubt have heard the orders from the program. There will be no high school baseball for these players.

The Thunder formed back in 2013. It was for players who wanted a big challenge.
"They wanted to play at a little bit higher level,'' Rose noted.

Yes, there were gifted players around in Southeastern Wisconsin. And when this team played at the under-10 level, it won a tournament.

And the word began to spread about the up and coming Thunder.

"As we started to grow we started expanding,'' Rose said. "We brought in more coaches. We filled in with a pitching coach."

And the program hired an expert in sports performance. At the University of Wisconsin-Lacrosse, coach, Ajamu Olaniyan, is a legend. He holds conference records in the triple jump. He's a seven-time All-American. He's a nine-time national champion. In 2008, Olaniyan was inducted into his college's Hall-of-Fame. Also he was also named to All-Time Track and Field team for the conference.

So how does Rose compare with the team's sports performance king? He played baseball in high school but went to college playing football.

Yes, the Thunder is considering growing other teams with its program. That's because 58 players tried out for the U-14 team.

Rose and his team turned the popularity of this program into gaining some sponsors. First there was Combat Sports that was bought out by Easton Sports. Also New Balance also has joined up. That helps with paying for the trips the program takes. Such as Omaha, Nebraska and the World Series in Bloomington, IL.

Rose deflects the high school baseball argument. He says his team gets plenty of attention from scouts at the various baseball tourney.

"My goal for these players in that they will play in college,'' Rose said.

Rose is comfortable with his players trying out for other sports.

"We take a break at the end of July,'' he said. "We know there is football starting in August. But in three months, we begin our indoor training.

Most recently, the 14-U team took on teams playing at the 15-U level. And the Thunder took top honors with no defeats to win the Top Prospects Team Exposure Camp at Carthage College.

Rose is clear, he also wants good citizens on his team.

"We focus on finding quality kids and families,'' he said. "I really have no complaints."