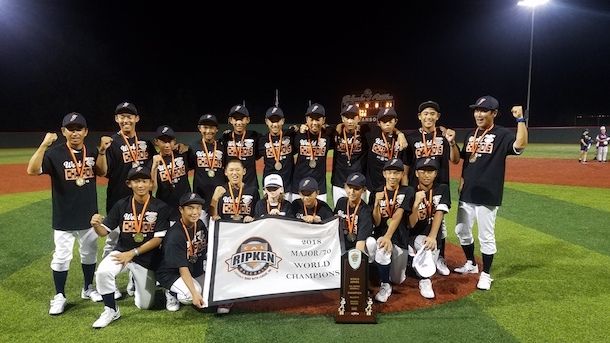 After an exciting week of baseball the Cal Ripken Major 70 World Series came to an end tonight in Branson, Missouri.

Japan and Virginia faced off at 7 P.M. in the World Championship game; both teams came into the matchup undefeated and champions in their respective bracket.

Lee Sowers started for Virginia while Taira Matsuo took the mound for Japan.

Japan batted first but could not do anything as Sowers commanded the zone and racked up two early strikeouts.

Virginia would strike early as Sowers helped out his own cause with an RBI double driving in Cameron Slough. Sowers would later score on a throwing error giving Virginia a 2-0 lead after one.

Ryoga Saka came in to relieve Matsuo after the first inning and did a good job of stabilizing Japan on defense. Virginia had a few opportunities to score including having the bases loaded in the second inning but Saka was able to work out of it.

Japan threatened a few times on offense but made some unexpected mistakes including getting thrown out at home on an infield ground ball and getting caught stealing in the fourth inning.

Even though Japan was down it never felt like they were out of the game. They finally broke through in the fifth inning scoring five runs.

Juntaro Sasaki got the rally started with a leadoff single, Kosei Tamura walked right after and just like that Japan had runners on first and second with no outs. After both runners advanced on a wild pitch, a sacrifice fly would give Japan their first run of the game. Ryunosuke Tsuji would lay down a beautiful squeeze bunt the very next at bat tying the game at 2. Rintaro Kosugi and Futa Shimizu would drive in three more runs for Japan with some clutch hits giving Japan a 5-2 lead after five.

Virginia would try to rally late like they did in the American Championship game but could not string together hits. The pitching of Japan was too effective in the later innings and Japan was able to hold on to a 6-2 victory.