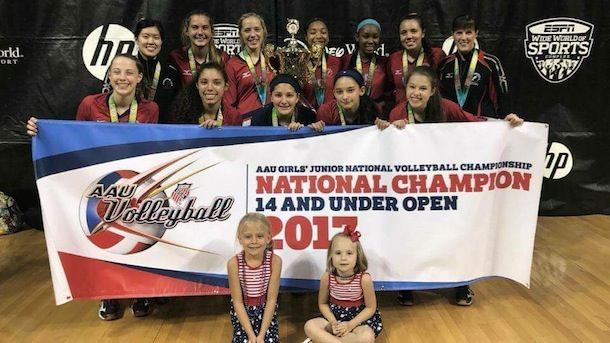 It’s rare for a group of middle school girls that the highlight of a week-long trip to Orlando is not a visit to Disney World, but that turned out to be the case for the SPVB Elite volleyball team in June.

Instead of focusing on Mickey Mouse or the Magic Kingdom, the team was all business in its objective to capture an AAU Junior Volleyball national title at the Disney Wide World of Sports Complex.

SPVB was a dominant team all year going into the tournament and that didn’t change even with the best competition available at the national tournament, as the team won the national championship for the Open Division.

Based in Aurora, Illinois, the team went a perfect 11-0 in its matches and dropped just two sets to become the first 14-under team in the history of the club to win a national title.

Head coach Cheryl Butler previously coached national champions in 18-under and 16-under Divisions.

“We had good setting, we had a good Libero position, everyone got along really well and we have quite a few kids on our eighth grade team that have been with the program a long time,” Butler said. “It makes it easier to coach when they have been around the system longer.”

In the championship match on June 18, SPVB beat Asics Kiva Red, which was the fifth time the teams had met this season at major tournaments.

“I was a little worried because we had played them the day before in our three-team pool,” Butler said. “It was kind of close. You never want to play somebody that many times. It was little scary playing them for the national championship because you just never know.”

But SPVB left no doubt as to which team was the best, and the team finally got to enjoy a little bit of Disney World when it was all said in done to celebrate its title.

“We went to Blizzard Beach for a while and then got their nails done,” Butler said.

Keith Dunlap 4 years ago
next page?