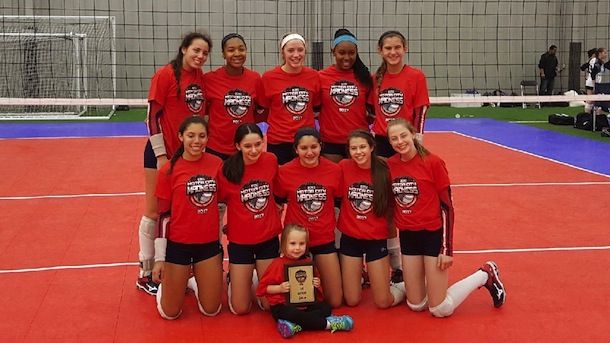 The SPVB 14 Elite volleyball team entered the prestigious Motor City Madness tournament on April 29-30 having not dropped a set in league play all year, but knew it would be an entirely different challenge going up against some of the premier club teams in the Midwest.

As it turns out though, not even an increased level of competition could slow SPVB down.

SPVB 14 Elite did actually start off the Open 14 tournament by losing a set, but that would be the only won it would lose after that in cruising to the tournament title.

Based in Aurora, Illinois, SPVB 14 Elite wasn’t tested much the rest of the way and finished off its run with a 25-19, 25-19 win over Munciana 14 Banana Slugs in the Open 14 championship match.

“I have a pretty good team this year, knock on wood,” head coach Cheryl Butler said. “We took third at the JVA World Challenge and we took fifth at the Bluegrass tournament. We seem to get a little bit better every weekend we play.”

Butler said the best players for her team were setters/outside hitters Zayna Meyer and Jessica Molina, and libero Alexis Rodriguez, who Butler said is the best player she has coached at that position in her 35 years of being a coach.

Those are names that will likely be heard of plenty on the recruiting trail over the next few years.

“This is the first stage for them,” Butler said. “College coaches start watching the bigger tournaments and putting them on their radar.”

There are still plenty of goals for the team to accomplish, with the biggest potential prize being a national championship in June when the AAU Junior National Volleyball Championships take place from June 14-26 at the ESPN Wide World of Sports complex in Orlando.

Not only does SPVB 14 Elite have the talent to contend for the national title, but it has tremendous continuity forged from years of playing together.

“We have some kids who have been in our program for almost eight years,” Butler said. “They have been with us since they were first grade, kindergarten and now they are eighth graders. It’s kind of neat to see.”