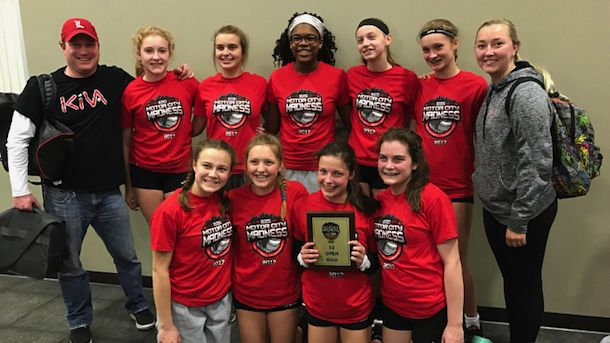 John Kordes knows that the 13-under volleyball team he coaches isn’t quite at the point where college coaches start intensely recruiting his players.

But it sure is getting close for his Asics KIVA 13 Red squad based in Louisville, KY.

“They don’t really come up to me and really start asking about them,” Kordes said. “But they could be looking at them already and just not telling me.”

Judging by the results at the prestigious Motor City Madness tournament on April 29-30, college coaches might already have Asics KIVA 13 Red players on their radar.

Competing in the Motor City Madness tournament held in suburban Detroit for the first time, Asics KIVA Red left Michigan with the championship plaque after winning the 13 Open championship.

Open is considered the top classification for volleyball teams competing at tournaments.

Asics KIVA went unbeaten for the weekend, capping off its perfect weekend by beating Legacy Elite, a club based close by in suburban Detroit, by scores of 25-20 and 25-22 in the championship match.

Kordes said the team had some adversity in the championship match when it fell behind in the first game, 19-13, but stormed back with a 12-1 run to win the first game before closing out Legacy in the second game.

Kordes said the big standouts in the tournament were libero Maddie Vaughn, Emma Desensi and Kayla Bryant on defense, and outside hitter Chloe Osborne offensively.

Osborne and a couple of other players returned from injury, so Kordes is obviously thrilled to see his team get to full strength for the final month of its season.

There were over 500 teams from age groups 12-18 competing in the two-day festival.

“We wanted to see some teams that we normally don’t see,” Kordes said. “We don’t get the opportunity to play them all that much.”

Next up for Asics KIVA is a tournament later this month in Columbus, Ohio and then a trip to Orlando in the middle of June for the JVA national tournament.

“I think we ensured ourselves a top-5 seed at that tournament by winning in Michigan,” Kordes said.