2024’s Charlie Newton has aspirations of becoming an Indiana Hoosier

2024’s Charlie Newton has aspirations of becoming an Indiana Hoosier 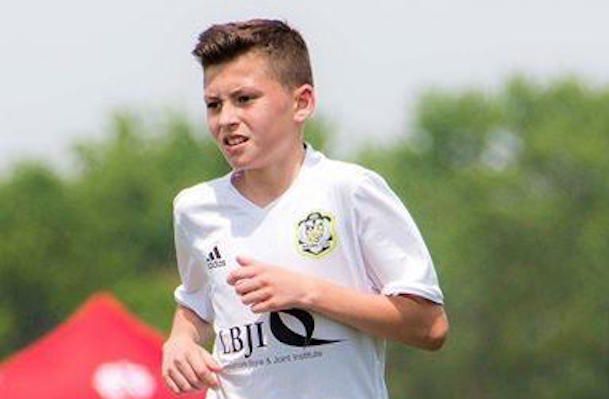 Charlie Newton is one of the best players from the Crown Point, Indiana area in the Class of 2024.

The 5-foot-3, 105-pound Newton, who attends Kahler Middle School and Lake Central High School, is a dynamic player that works at forward and midfield.

Newton, who plays for the Indiana Elite FC, has earned plenty of recognition during his outstanding career, such as All Division Team/ISL (Fall 2017) and Team MVP (2017-18 season).

Newton is humbled by the accolades.

No matter the opponent, every match Newton is determined to give it his all.

Newton is going all out.

The motor is always at full throttle whenever Newton steps between the lines.

“My mindset as a midfielder is to be the engine of the team and to create opportunities for all my teammates,” Newton said. “My mindset as a forward is to make as many quality attacking runs and get as many shots on goal as possible.”

Newton has great passion and energy whenever he’s on the field. Newton tells why he enjoys the game of soccer so much.

“The thing I love the most about playing is how creative you have to be on the field,” Newton said. “Even though it may seem easy, at higher levels with 22 players on the field things get hectic and decisions have to be made quickly.”

Newton has learned many valuable lessons from playing soccer that he applies to his everyday life.

“My favorite memory was in a State Cup game when I was dealing with an injury. I had missed a goal, but my teammates kept supporting me and then later I scored a goal and my teammates rushed me on the field,” Newton said. “That felt awesome. My coach even gave me a hug.”

Jereme Rainwater is Newton’s coach for the Indiana Elite.

“Charlie is our striker. He is very quick with the ball and has a knack for beating players in the final third,” Rainwater said. “Charlie is a winner.  No matter the situation he always gives you a chance. Great player with the will of the greatest players.”

Newton takes his role as one of the leaders on the team very seriously. Newton makes sure he’s a daily positive influence on his peers.

“In my mind being a good teammate isn’t about correcting someone’s mistake negatively, it’s about being positive. If one of my teammates makes a mistake, I will try to be positive with them, so it doesn’t ruin the rest of their game,” Newton said. “I tell them just to stay positive and to not fight and argue when things aren’t going as planned.”

Rainwater adds that Newton is one of those consummate teammates that every squad needs to be successful.

Newton is appreciative of having amazing role models that are supportive.

Rainwater is an advocate of Newton’s capabilities.

In addition to making clutch plays, Newton also has a high level of soccer IQ as well.

Newton has excellent awareness that puts him in position to thrive.

“He is a very good reader of the game,” Rainwater said. “He is a very smart striker that understands how to take advantage of my skill set for the benefit of the team.”

Newton is on the grind to perfect and hone his craft in any way possible.

“Outstanding work ethic in training and games,” Rainwater said. “Charlie competed a lot out of season making him better every week.”

Rainwater explains why he compares Newton to this player.

“If I compared Charlie to any pro player it would be former player Samuel Eto'o,” Rainwater said. “He has a skill set comparable to him for a player of his age.”

Newton patterns his play after these standouts.

“As a forward I like watching Luis Suarez play because of his timing of runs and he’s always in the right place at the right time,” Newton said. “As a midfielder I look up to Leo Messi because he creates awesome opportunities for himself and his teammates.”

Newton is constantly striving for greatness in everything that he does.

“My goals on the field are to keep working hard so that I can do what I love and play soccer for as long as I can,” Newton said. “Off the field my goals beyond soccer are to get a great education, have a good career and be a good person.”

“My dream college is Indiana University because IU has a great soccer program, is not too far from home and I can get a great education,” Newton said.

Newton lists science as his favorite subject in school.

“I get to learn about the body and how it works and functions,” Newton said. “I like this because I am always active, and it can teach me how to keep my body healthy.”

Rainwater believes the sky is the limit as long as Newton continues to stay hungry.

“Charlie has a very high ceiling and with his very high level of work ethic I am confident he will achieve his dreams,” Rainwater said.