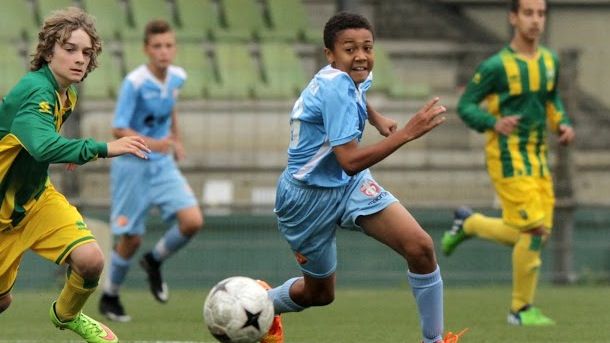 Lateef Omidiji is one of the most high profile soccer talents to ever play on the US youth national team. Now the winger is taking his talents to the Netherlands, per TopDrawerSoccer:

It’s official. Lateef Omidiji, one of the most intriguing and heavily sought-after prospects in the U.S. youth national team pool, is on his way to Feyenoord.

Omidiji told TopDrawerSoccer.com this week his move to Feyenoord was official after featuring for the Sparta Rotterdarm and Dordrecht FC academies since moving to the Netherlands two years ago. Omidiji signed a widely reported deal with Arsenal in February, in which Nigerian outlet All Nigeria Soccer reported he'd train with the London club each summer. Omidiji told TopDrawerSoccer.com he'll remain with Feyenoord for the foreseeable future with the potential to move to Arsenal permanently on a pro deal down the road.

The 13-year-old attacker, who’s played all along the front line in his short career but specializes as a high-flying winger, was born in Las Vegas, Nev. and was called into a U.S. U14 BNT camp as recently as November. But he’s also been tied heavily to Nigeria, the country of his father’s birth. As for his nationality concerns, Omidiji told TopDrawerSoccer.com that both are still in play but that “everyone at Feyenoord knows I’m leaning toward the USA.”

For now, Omidiji becomes the first ever American-born player to sign a deal with the Feyenoord academy.

The only American to ever play for the first team was the now-retired Cory Gibbs, who logged 15 games and a goal from 2004-2006. Feyenoord’s academy, known as Varkenoord, has won the Rinus Michaels Award as the best academy in the Netherlands five times since 2010 and built the brickwork for a title-winning run the last two years. Feyenoord is a noted developer and currently boasts 14 players in its first team squad who came up through the academy. Stocked with that nucleus, Feyenoord is on the brink of winning its first Eredivisie title since 1999 this spring.

Omidiji’s notoriety first caught the public jet stream in 2014, when his performances for Las Vegas club Heat FC at the Dallas Cup set the event abuzz. Notably, he scored a solo golazo at the widely scouted tournament that hit YouTube and now has more than 50,000 views.

Omidiji moved to the Netherlands with his family soon thereafter, but it wasn’t until he was linked to a handful of megaclubs earlier this year that his status went international. In February, Arsenal reportedly beat out the likes of Chelsea, Real Madrid and Manchester City for his services, and the agreement to stay in the Netherlands and play for Feyenoord’s academy came shortly thereafter, he said.

For now Omidiji will play for the Feyenoord U15 team, which currently features eight Dutch U14 national team players, with an eye toward moving up the ladder at one of the most vaunted developers in Europe.