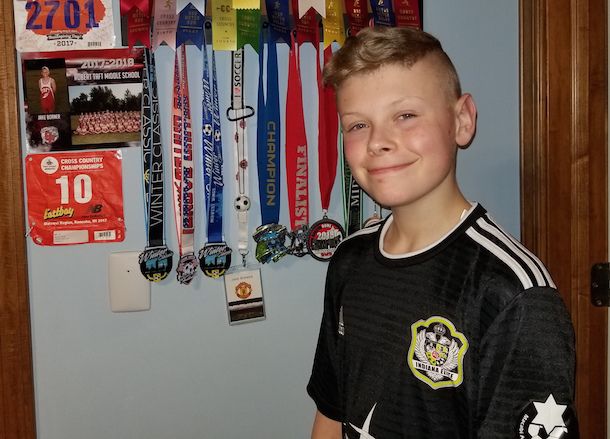 Jake Borner is one of the best players from the Crown Point, Indiana area in the Class of 2023.

The 5-foot-2, 95-pound Borner, who attends Taft Middle School, is a dynamic player that works as a defender.

Borner, who plays for the Indiana Elite FC, has earned plenty of recognition during his outstanding career, such as:

Borner is humbled by the accolades.

“Winning these awards proves that all the hard work and practice paid off to compete at this level,” Borner said. “It was very exhilarating and nerve racking participating in these tournaments. It makes me want to continue to train to get even better.”

No matter the opponent, every match Borner is determined to give it his all.

Borner is going all out.

The motor is always at full throttle whenever Borner steps between the lines.

“My mindset is that I’m up for the challenge,” Borner said. “I like to help my team win and I don’t ever want someone to beat me as a defender. I want the opponent to have to work hard for everything they get when I’m on the field.”

Borner has great passion and energy whenever he’s on the field. Borner tells why he enjoys the game of soccer so much.

“I love to be part of a team and have great experiences,” Borner said. “I love being able to celebrate big wins in the locker room with his teammates, who are like brothers to me.”

Borner has learned many valuable lessons from playing soccer that he applies to his everyday life.

“Playing soccer has taught me so much about life in general,” Borner said. “It has taught me that you don't have to rush through everything. Take your time and have fun.”

“My favorite memory was in the 2014 Wolf River Classic, making it to the finals and going to a penalty kick shootout for the win,” Borner said. “It was such a special moment that I’ll never forget.”

Jereme Rainwater is Borner’s coach for the Indiana Elite.

“Jake plays as a outside back when we play a back 3. He can be a shut down defender to prevent opponent from scoring and can help team build up to start offense,” Rainwater said. “Very smart defender that reads the game really well, shuts down opponents attacking play, excellent in 1v1 situations and helps team build up in attack.”

Borner takes his role as one of the leaders on the team very seriously. Borner makes sure he’s a daily positive influence on his peers.

“I demonstrate being a good teammate by always working hard and being positive to set a good example,” Borner said. “The best advice I give is never give up under the toughest circumstances.”

Rainwater adds that Borner is one of those consummate teammates that every squad needs to be successful.

Borner is appreciative of having amazing role models that are supportive.

“I have learned from my coaches how to be a better player and person. They tell me to always give 110 percent on and off the field,” Borner said. “They tell us to always work as a team and strive to get better every day. As long as we do our best, we have nothing to be ashamed of.”

Rainwater is an advocate of Borner’s capabilities.

In addition to making clutch plays, Borner also has a high level of soccer IQ as well.

Borner has excellent awareness that puts him in position to thrive.

“Jake reads the game very well with a great ability to tackle the ball,” Rainwater said. “Very good reader of the game, very smart defender that understands his strengths and weaknesses and uses it to his advantage.”

Borner is on the grind to perfect and hone his craft in any way possible.

“Outstanding work ethic in training and games,” Rainwater said. “Jake is always training. He even helps out with other teams allowing him to get more touches.”

Rainwater explains why he compares Borner to this player.

“If I had to compare Jake to any pro player I would say he would be like Luke Shaw,” Rainwater said. “He likes to get forward but covers in the back.”

Borner patterns his play after these standouts.

“The players I look up to are Ramos, Marcelo and Dani Alves,” Borner said. “ I look up to these players because of what they have accomplished in there careers.”

Borner is constantly striving for greatness in everything that he does.

“I’m interested in any college that has a great academic and soccer program,” Borner said.

Borner lists science as his favorite subject in school.

“I enjoy science because of the cool experiments that we get to conduct,” Borner said.

Rainwater believes the sky is the limit as long as Borner continues to stay hungry.

“Jake has the tools to make a impact at every level he plays at. He can compete against the very best,” Rainwater said. “Time will tell and I am confident in his chances.”