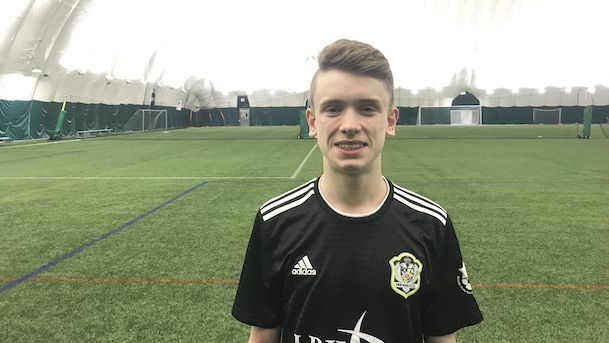 Ben Thien is one of the best players from the Crown Point, Indiana area in the Class of 2023.

The 5-foot-11, 133-pound Thien, who attends Benjamin Franklin Middle School, is a dynamic player that works as a center back and center mid.

Thien, who plays for the Indiana Elite FC, has earned plenty of recognition during his outstanding career, such as: Indiana Elite USSDA 04 Team, Indiana ODP State Team 2018-2019 and ODP Regional Pool Game (2019).

Thien is humbled by the accolades.

“The recognition of those awards gives me confidence and motivation to keep working hard,” Thien said. “The USSDA team and games were awesome. Being able to play in an 04 group as an 05 was tough but really exciting. The Indiana ODP teams and Regional Pool game was a great experience. I made a lot of friends from different teams and states when I got to travel to Regional events in Pennsylvania and Memphis, TN. There are so many good players in the Midwest region so it’s a really cool feeling to be chosen.”

No matter the opponent, every match Thien is determined to give it his all.

Thien is going all out.

The motor is always at full throttle whenever Thien steps between the lines.

“My basic mindset at the center back position is to organize the defense and help the team play out of the back,” Thien said. “In the midfield I try to help the team keep possession by finding open space and moving the ball to create scoring opportunities.”

Thien has great passion and energy whenever he’s on the field. Thien tells why he enjoys the game of soccer so much.

“The thing I love the most about playing is the fact that I get to travel to different places and play against some really good teams,” Thien said. “Hanging with my teammates when we travel is a lot of fun.”

Thien has learned many valuable lessons from playing soccer that he applies to his everyday life.

“Playing the game of soccer is teaching me how to deal with winning or losing, working hard for what you want, and how to get along with other people,” Thien said.

“One time my team and I were in the championship game of a tournament and we went to PKs. I remember missing my PK and walking back really upset with myself,” Thien said. “After the ninth round of PKs we finally won the game and our whole team was crying we were so happy.”

Jereme Rainwater is Thien’s coach for the Indiana Elite.

“Ben plays center back in the back and is an attacking mid when we are pushing forward,” Rainwater said. “Ben is very strong and has the ability to get forward with pace in the attack. The opponent has to always be aware of him at all times.”

Thien takes his role as one of the leaders on the team very seriously. Thien makes sure he’s a daily positive influence on his peers.

“I demonstrate being a good teammate when, for example, my teammates get injured I try to be the first one to them and help them to their feet. I also compliment/motivate them when they do something really good,” Thien said. “I try to be a positive teammate all the time and not let my teammates heads go down. So I tell them to stay positive, keep working hard, and never give up.”

Rainwater adds that Thien is one of those consummate teammates that every squad needs to be successful.

Thien is appreciative of having amazing role models that are supportive.

“Most of my Elite coaches have taught me how to work hard, be respectful, and give maximum effort in training and on the pitch. They have so much coaching experience and have played at really high levels that I have a lot of respect for their advice and ideas,” Thien said. “When my dad coached me he always told me to have fun and enjoy the game, stay calm, and keep improving. After every game we used to talk about the good things and also what I needed to improve on. His advice was that you can’t be perfect but I should always try to learn and improve on something each game.?

Rainwater is an advocate of Thien’s capabilities.

In addition to making clutch plays, Thien also has a high level of soccer IQ as well.

Thien has excellent awareness that puts him in position to thrive.

“He is a very good reader of the game,” Rainwater said. “He is a very smart player that understands how to take advantage of my skill set for the benefit of the team.”

Thien is on the grind to perfect and hone his craft in any way possible.

“Ben does ODP and challenges himself at a lot of levels,” Rainwater said. “Ben competed a lot out of season making him better every week.”

Rainwater explains why he compares Thien to this player.

“If I compared Ben to any pro player it would be former player John Terry,” Rainwater said. “He has a skill set comparable to him for a player of his age.”

Thien patterns his play after this standout.

“I look up to Kevin De Bruyne. I like that he never gave up after a bad experience at Chelsea and he is a very calm and intelligent player,” Thien said. “He is so talented and makes me want to be a better player.”

Thien is constantly striving for greatness in everything that he does.

“I haven’t really thought about what college I would like to pursue in the future although I would definitely like to have a chance to play soccer in college,” Thien said.

Thien lists math as his favorite subject in school.

“It is very simple and easy to me. I find it very interesting,” Thien said. “Math is important to know in the real world.”

Rainwater believes the sky is the limit as long as Thien continues to stay hungry.

“Ben has a very high ceiling and with his very high level of work ethic I am confident he will achieve his dreams,” Rainwater said.