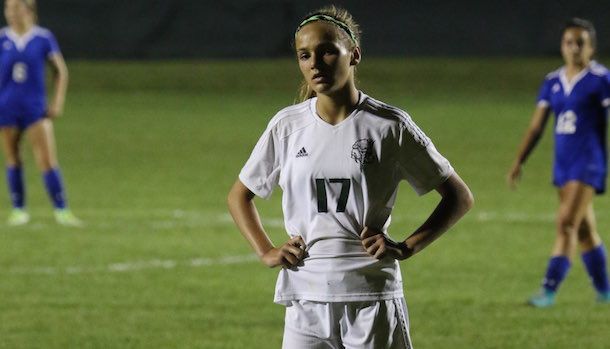 Kailyn Smith is one of the best players from the Crown Point, Indiana area in the Class of 2022.

The 5-foot-9, 125-pound Smith, who attends Valparaiso High School, is a dynamic player that works as a center back.

Smith, who plays for the Indiana Elite FC, has earned plenty of recognition during her outstanding career, such as 2018 Defensive MVP at Valparaiso High School and Second-Team All-Area selection by the Chicago Tribune. Smith was the only freshman selected to an All-Area team.

“It made me be a better player, and it made me realize that as a freshman my team had full trust in me,” Smith said. “It motivates me to want to keep working hard to improve as a player.”

No matter the opponent, every match Smith is determined to give it her all.

“My mindset is that I can never be beat and no one can pass me,” Smith said. “I want the opponent to have to work hard for everything they get when I’m on the field.”

Smith has great passion and energy whenever she’s on the field. Smith tells why she enjoys the game of soccer so much.

“I love being able to go out on the field and compete with my teammates,” Smith said. “It’s a great feeling to celebrate success and winning with your team because they’re like your family.”

Smith has learned many valuable lessons from playing soccer that she applies to his everyday life.

“What playing soccer has taught me about life is to work as hard as you can and it will get you to greater achievements,” Smith said. “If you give it your all, you will have no regrets.”

“My favorite memory was when we were at regionals for high school soccer, and we beat Penn High School 2-1, making it to semi-state,” Smith said. “That was a special moment for our team.”

Semir Mesanovic is Smith’s coach for the Indiana Elite.

“Can play all positions in defense. Shut down defender to prevent opponents from build up. Matches up defense against best attacking players each game,” Mesanovic said. “Extremely smart and athletic defender that reads the opponents play well, helps team gain possession and matches up against opponent’s strongest attacking players game in game out. Very technical and athletic defender.”

Smith takes her role as one of the leaders on the team very seriously. Smith makes sure she’s a daily positive influence on her peers.

“I am a good teammate because I constantly work hard and try to help out my teammates as much as possible,” Smith said. “The best advice that I could give is to try your best and to work hard.”

Mesanovic adds that Smith is one of those consummate teammates that every squad needs to be successful.

“Leadership comes from early age playing high level, athletic family with great values and respect, great attitude and huge appetite to compete and improve each day,” Mesanovic said.
“Leads by example in training and trains same way how she competes in games.”

Smith is appreciative of having amazing role models that are supportive.

“My coaches have helped make me a better player and person,” Smith said. “What I have learned from my coach is to always put in maximum effort, never give up, and to play as a team.”

Mesanovic is an advocate of Smith’s capabilities.

“As a first year player - played as a shut down defender earlier in season against nationally ranked team from Wisconsin,” Mesanovic said. “Matched up really well against u17 attacking players that had stints with regional and national level. Continued strong play throughout first college tourney.”

In addition to making clutch plays, Smith also has a high level of soccer IQ as well.

Smith has excellent awareness that puts her in position to thrive.

“Uses her athleticism and speed to break down opponents attack. Excellent in all aspects of defending 1v1, 1v2s, 2v3s,” Mesanovic said. “And uses same values to gain possession and start team’s attack.”

Smith is on the grind to perfect and hone her craft in any way possible.

“She has a great work ethic and great attitude on and off the field,” Mesanovic said. “She is the ultimate team player and teammate.”

Smith patterns her play after these standout.

“I have no favorite positional player, but I admire Carlie Lloyd and Messi because they have a great mental attitude and strong work ethic,” Smith said.

Smith is constantly striving for greatness in everything that she does.

“My goals are to always try my hardest in what I do, and to achieve my goals academically and athletically,” Smith said.

“As a freshman, I do not have a dream college yet, but I hope that one day I can go to a good academic and athletic school,” Smith said. “I hope that I can get a starting position on a good team.”

Smith lists biology as his favorite subject in school.

“It is a field of study that I am interested in for future careers,” Smith said.

Mesanovic believes Smith is determined take her game to the next level.

“Would love to challenge her to be a more of a vocal leader on and off the field, show and lead by an example,” Mesanovic said. “Because she possesses all the attributes technically and physically to play at a high level.”

Mesanovic believes the sky is the limit as long as Smith continues to stay hungry.

“She is gifted with athleticism and clever play. She needs to stay focused, stay away from distractions and continue this amazing journey and inherit an extreme work ethic,” Mesanovic said. “If she does that then everything should work itself out. She is a high level athlete and player that should have great aspirations playing and attending college level and beyond.”