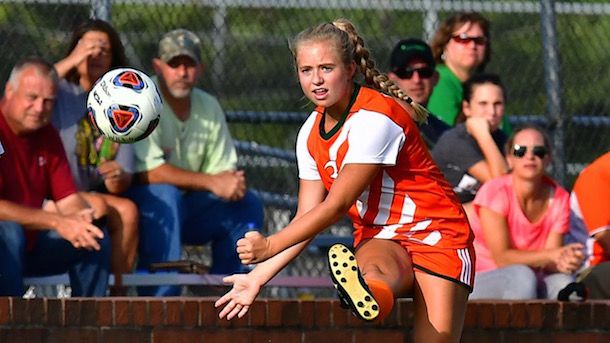 Morgan Putz is one of the best players from the Chicago, Illinois area in the Class of 2021.

The 5-foot-4, 133-pound Putz, who attends Wheeler High School, is a dynamic player that works as a right back.

Putz, who plays for the Indiana Elite FC, has earned plenty of recognition during her outstanding career, such as being honorable mention for All Conference.

Putz is humbled for the chance to showcase her skills.

“It feels good to be recognized for all the hard work that I have put into the sport.  I am very determined so getting this award meant that all my work is paying off,” Putz said. “I haven’t participated in an All-star event, but I did play in two back-to-back state games over the past two years.  It has been the highlight of my soccer career even though the outcome is not what my team wanted. However, it is an experience that many athletes won’t get to have so just being there was thrilling to say the least.”

No matter the opponent, every match Putz is determined to give it her all.

Putz is going all out.

The motor is always at full throttle whenever Putz steps between the lines.

“My mindset at right back is to keep forwards and midfielders from scoring.  Being a defender you always to have a positive attitude,” Putz said. “You can’t let a goal against you get you down or else it will set the tempo for the rest of your team and you won’t get the outcome that you want.”

Putz has great passion and energy whenever she’s on the field. Putz tells why she enjoys the game of soccer so much.

“The thing I love most about soccer is that rush that you get from playing,” Putz said. “I really like the challenge I face when I see someone dribbling at me, crossing the ball,  doing something that positively impacts the game no matter how big or small the play, and making and creating runs and great passes to set my teammates for possible scoring opportunities.”

Putz has learned many valuable lessons from playing soccer that she applies to his everyday life.

“Soccer is a game that either goes your way or it doesn’t.  No matter how hard you work at something it may not always work in your favor every time,” Putz said. “But you get another chance/opportunity the next time you step on the field to learn from your prior mistakes and to strive for greatness.”

“My favorite memory of playing is the past two high school seasons in which I got to play with my older sister Lauren. She is one of my biggest mentors and I felt like I learned so much from her on and off the field over the past two years,” Putz said. “It is something that I will always cherish as a soccer player and being her sister.”

Semir Mesanovic has been Putz’s coach for the Indiana Elite for the last two years.

Putz takes her role as one of the leaders on the team very seriously. Putz makes sure she’s a daily positive influence on her peers.

“I demonstrate being a good teammate by always being positive no matter the situation of the game. I believe positivity can be a game changer and I like to tell my teammates whenever they make a good play, shot, etc,” Putz said. “The best advice I have given my teammates is to always keep your head up no matter where the game is, win or lose.”

Mesanovic adds that Putz is one of those consummate teammates that every squad needs to be successful.

“Her leadership skills comes from an early age of playing high level soccer and having great family values and upbringing,” Mesanovic said. “She is a player that trains like she competes in games.”

Putz is appreciative of having amazing role models that are supportive.

“I have learned from my coach that you can take what you learn from soccer in regards to having good work ethic and a positive attitude and apply that in your daily life,” Putz said. “The best advice I have ever received is from my current coach, Coach Semir.  He always tells me to keep a smile on my face. It makes the harder practices and games that much better as you can push through it easier.”

In addition to making clutch plays, Putz also has a high level of soccer IQ as well.

Putz has excellent awareness that puts her in position to thrive.

“Very smart and intelligent player with good decision making habits that team contributes the most,” Mesanovic said. “Always plays for the team, gets crosses in and helps team build in attack.”

Putz is on the grind to perfect and hone her craft in any way possible.

“Great work ethic and great attitude on and off the field,” Mesanovic said. “Ultimate team player and a competitor that competes daily with a smile on her face.”

Mesanovic raves about the characteristics of Putz.

“Morgan is a right-sided defender that likes to go forward and help team on both ends off the field,” Mesanovic said. “She is a true competitor with a great attitude on and off the field. Ultimate team player and coaches player.”

Putz patterns her play after this standout.

“My favorite pro player is Julie Ertz.  Being a member of the United States National team just goes to show you she is a great defender.  It isn’t only the level that she plays at that I admire but her determination is what I adore most about her,” Putz said. “She is always the type of player that never gives up and constantly displays positivity to her teammates. Single handedly one of the toughest player I have ever seen play the sport.”

Putz is constantly striving for greatness in everything that she does.

“My major goal on the field is to receive an All State award and to hopefully participate in the Indiana District games,” Putz said. “My goals off of the field are to graduate near the top of my class and to overall be a good and kind person that people enjoy being around.”

“My dream college is Clemson University.  I would love to attend school there,” Putz said. “It has two majors (nursing, international business) that I am very interested in possibly pursuing.  I will be visiting there this summer to see the campus in person.”

Putz lists math as her favorite subject in school.

“I like working with numbers,” Putz said. “It is not an easy subject for most and it definitely isn’t for me either, but I find it very challenging.”

Mesanovic believes Putz is determined take her game to the next level.

“We can improve on speed of play, playing quicker and contributing to the team even more by getting key passes and crosses and shots on goal,” Mesanovic said. “Desire and dedication is key and she has those traits.”

Mesanovic believes the sky is the limit as long as Putz continues to stay hungry.

“I would love to see Morgan Putz attend and play college level soccer because the competitive nature and desire is there,” Mesanovic said. “She is a great student, from a great family with life morals, values and respect. Time will tell as ultimate dedication and sacrifice is needed and I believe she has it. The choice is Morgan’s.”