NJ multi-sport athlete defies odds on and off the field

NJ multi-sport athlete defies odds on and off the field 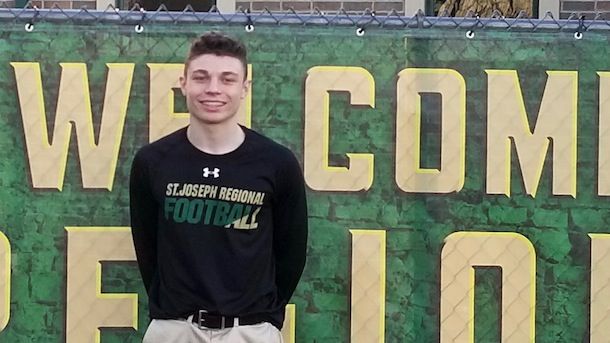 Peter Schuh from Wyckoff, New Jersey is no average 14 year-old, excelling at Eisenhower Middle School with a perfect 4.0 grade point average while playing football, lacrosse and basketball. Off the field, Schuh volunteers his time as an assistant coach with Wyckoff Pee Wee Recreation. Training at the Parisi Speed School in Franklin Lakes, New Jersey, Schuh was named Champion of the Month. Schuh received an MVP award at a football camp at Kean University along with an invitation to play in the All-American Citrus Bowl in Orlando, Florida.

A couple of weeks ago, Schuh announced he was going to attend Saint Joseph’s High School in Montvale, New Jersey.

Despite all those accomplishments, Schuh has been very sick since kindergarten. During a surgical procedure, Schuh went into cardiac and pulmonary procedure and was admitted into the pediatric intensive care unit at Hackensack Hospital. Shortly thereafter, Schuh and his family received a life-changing diagnosis of Asthma, Celiac Disease and a heart defect. At one point, Peter lost 20 pounds, losing a pound a day, choking on food and drooling.

Peter had been diagnosed with EE (Eosinophilia Esophagitis) in 4th grade which led to him losing so much weight and being unable to swallow food.

In his story “My New Normal” Schuh describes feeling alone and  wondering if he would die or have a feeding tube. He said moments like this may seem unfair but helps you become a stronger person. His determination and perseverance is what carries him to get his life back on track.

Read the full interview at doublegsports.com.