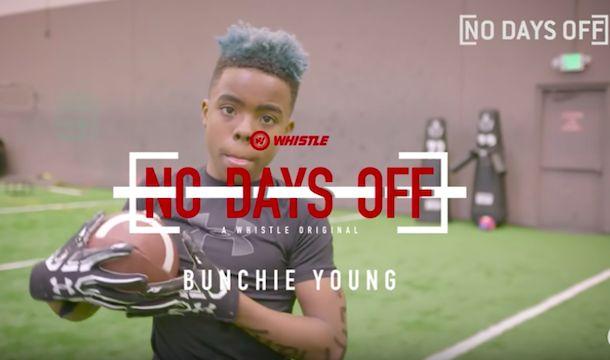 Maxwell “Bunchie” Young is a 12-year old football player from Los Angeles, California. Bunchie exploded onto the national scene when he was just 9-years old, since then his highlights on YouTube have surpassed millions of views. He was recently featured on an episode of No Days Off, a series produced by Whistle’s YouTube Channel. The show features all different kinds of young athletes with extraordinary talent and spirit.

At the age of 9 Bunchie Young old broke the 10-year old world record for the 100-yard dash with a time of 12.4. When Bunchie turned 11 he was named Sports Illustrated Kids SportsKid of the year and received a scholarship from the University of Illinois to play football.

Bunchie is now 12-years old still working hard to fulfill his dream of playing college and pro football. Bunchie is still light years ahead of his competition thanks to his world-class speed.

“Speed kills… and I got speed,” said Bunchie.

Speed may have brought Bunchie to the dance but his work ethic is the key to his future success. Training 5-6 days a week may seem like a lot especially to the average 12-year old kid but not Bunchie, training and football is all he wants to do.

Get attention like Bunchie. Get a spotlight article written about you and vault yourself onto the national stage!

“I’m trying to build careers not just great football players, I want you to be a great man, and a great man makes a great football player” said Morgan Fennell, Bunchie’s coach and trainer. “All my kids whether they’re 5,6,7,8,9,10 get treated the same way as professional athletes that’s why we call it career prep,” Fennell said.

When your goal is to one-day play in the NFL talent and work ethic are sometimes not enough. It is important to surround yourself with the right people; Bunchie has a great foundation guiding him, including a special bond with current Tennessee Titans cornerback Adorre Jackson.

“When I see Bunchie I see myself,” said Jackson.

“He’s kind of like my big brother I’ve known him for so long and its cool just working out with him and stuff,” said Bunchie, on his relation ship with Adoree Jackson. “It’s almost like cheating cause you get watch a pro player, he’s one of the best players in America right now and it’s just crazy to learn from him.”

Growing up on the west coast Bunchie would ideally like to play his college ball at either USC or Oregon. His dream would be to one day get drafted by either of his hometown teams the Rams or Chargers.

Right now Bunchie currently plays and dominates on both sides of the ball. His speed is too much for his opponents whether he is running the ball at halfback, catching the ball at receiver or locking down opponents on defense. Only time will tell what position he will play in the future, it wouldn’t be surprising to see him do a little bit of everything like his training partner Adorre Jackson did at USC.

Off the field Bunchie likes to spend time with his family. He recently started putting a little effort into playing baseball, another sport where his speed should translate to success. Whether it is football, track and field or baseball, Bunchie certainly looks as if he is destined for greatness in athletics and everything that comes along with it.