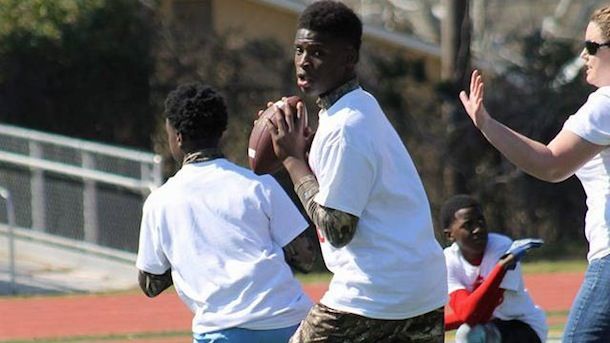 With a father who played football in college and a Hall of Fame uncle, the love of the gridiron has been engrained in Chad Mascoe since he was a child.

Mascoe, 13, is in seventh grade at Macintyre Park Middle School and lives in Thomasville, Ga. He plays quarterback for his school and for Decatur Army.

He was raised in Kissimmee, Fla., and began playing flag football at age 5, after his father, Chad, encouraged him to try it out.

His dad, who played outside linebacker at the University of Central Florida, had a feeling his son would do well. His uncle is NFL Hall of Famer Derrick Thomas.

“Everything he learned he taught me and everything that he learned I used in all those games,” Mascoe said.

At 8-years-old, his family moved to Atlanta, where he played tackle football for the first time. However, the transition from flag to tackle was not easy, he recalled.

“My first year playing tackle I was kind of scared,” he said. “I used to get hit hard.”

While he was playing quarterback, outside linebacker and safety, he knew his true calling was quarterback.

Over the years, he learned that football is much more mental than psychical. As a quarterback, he needs to have a short memory and always focus on the next play.

“I have trust in my offensive line,” he remarked. “I know if they make a mistake I got it on this play. All my coaches and teammates never put too much pressure on me. If my teammates need something, I go on the field and I do it.”

He stressed that he would not be where he is today if not for his dad, who has coached him his whole life. His dad taught him techniques, how to read defenses, throw the ball and much more. But, as much as he helped him on the gridiron, it’s their relationship as father and son that as grown over the years.

“Off the field we don’t even talk football, it’s all about family,” Mascoe commented.

Looking ahead, he will be moving back to Florida this summer, where he will attend Osceola High School in two years.

Mascoe, who averaged three touchdowns and ran for eight this year, wants to improve throwing the ball and continue learning how to adapt to different defenses. Like his role model, Cam Newton, he feels his athleticism and ability to run and pass the ball will allow him to succeed and eventually make it to the NFL.

“I don’t get nervous,” he said. “I know if I need a first down I’ll get it. Hopefully I can get to the NFL and my parents won’t have to go work.”

Jason Cohen 4 years ago
next page?