2029’s Shadeed Scott Jr. is one of the best trench leaders in Alabama | Youth1
Skip to main content

2029’s Shadeed Scott Jr. is one of the best trench leaders in Alabama

2029’s Shadeed Scott Jr. is one of the best trench leaders in Alabama 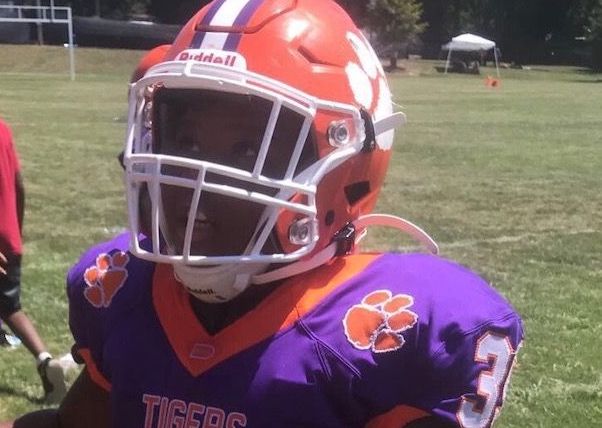 Shadeed Scott Jr. is one of the best players from the Hueytown, AL area in the Class of 2029.

The 4-foot-6, 141-pound Scott Jr., who attends Hueytown Elementary, is an imposing player that works as a defensive tackle and offensive tackle for the Bessemer Tigers.

Scott Jr. has been a part of many championship teams during his outstanding career such as:

Scott Jr. is humbled by the accolades.

“It means a lot. It makes me feel like I’m good and getting better each year,” Scott Jr. said. “It was just my dream. I’ve always dreamed that I would play out of town and that my team would become nationally ranked and compete nationally. So my dream came true.”

No matter the opponent, every game Scott Jr. is determined to give it his all.

Scott Jr. is going all out.

The motor is always at full throttle whenever Scott Jr. steps between the lines.

“My mindset is what gap am I going to shoot and making sure I’m hitting as hard as I can,” Scott Jr. said. “Also making sure I’m shooting the right gap when coach calls the play.”

Scott Jr. has great passion and energy whenever he’s on the field. Scott Jr. tells why he enjoys the game of football so much.

“I love being chosen to play in the games and having fun on the field,” Scott Jr. said. “I love playing with my teammates and winning games with them.”

Scott Jr. has learned many valuable lessons from playing football that he applies to his everyday life.

“Playing football has taught me so much about life in general,” Scott Jr. said. “In order to win you’ve got to want it bad enough. You have to work hard on the field and give your best effort.”

“It was my very first game playing football and Coach Gene let me play in the game and I got two pancakes,” Scott said. “That was a special memory that I’ll never forget. It was a great moment for me.”

“His high motor and quickness are his best assets,” Lee said. “Deed fires off the ball hard and uses his hands/strength good. That causes him to live in an opponent’s backfield.”

Scott Jr. takes his role as one of the leaders on the team very seriously. Scott Jr. makes sure he’s a daily positive influence on his peers.

“I try to be a good teammate by giving everything I got when I’m out on the field,” Scott Jr. said. “Make sure to pay attention during the drills at practice because they’ll help us during the game on game day.”

Lee adds that Scott Jr. is one of those consummate teammates that every squad needs to be successful.

“He gives a 100 percent at practice every day and in the games. He usually asks all the questions that all the other boys be scared to ask so all the lineman look up to him,” Lee said. “He’s my trench leader.”

Scott Jr. is appreciative of having amazing male role models that are supportive.

“My coaches have taught me how to be a better player and person on and off the field,” Scott Jr. said. “Don’t go out there and act like you’re someone else because that won’t work. Be yourself. Make sure to stay low on offense and defense because the lowest man wins.”

Lee is an advocate of Scott Jr.’s capabilities.

“Deed disrupted an offensive play in the backfield in the Atlanta national game that caused the running back to go all the way around him which he fumbled the ball that play,” Lee said. “Deed was the player to recover that fumble too.”

In addition to making clutch plays, Scott Jr. is developing a high level of football IQ as well.

Scott Jr. is growing into excellent football awareness that puts him in position to thrive.

“He’s my coach on the line,” Lee said. “He has a high IQ so he knows where everybody is supposed to be and doing. If we need a big play we’re usually running right off him.”

Scott Jr. is on the grind to perfect and hone his craft in any way possible.

“Sometimes I have to pick him up for practice. If I forget he blows my phone up and when I get there to get him late he’ll be so mad at me,” Lee said. “He’s the type of player that doesn’t want to miss a practice even if we’re conditioning all day.”

Lee explains why he compares Scott Jr. to this standout.

“Aaron Donald because of his high motor and quickness,” Lee said. “He’s usually the best lineman on the field no matter who we play. He demands a double team and teams usually run away from him.”

Scott Jr. patterns his mentality after this physical force.

“I look up to Quinnen Williams,” Scott Jr. said. “I like his game style plus he’s fast and a grown man version of me.”

Scott Jr. is constantly striving for greatness in everything that he does.

“My dream college is Alabama,” Scott Jr. said. “They always have the best coaching staff and it seems like a safe place.”

Scott Jr. lists math as his favorite subject in school.

“Math is favorite subject because I love doing multiplication, addition and subtraction problems,” Scott Jr. said. “Math is something very important that you will need in the real world.”

Lee believes the sky is the limit as long as Scott Jr. continues to stay hungry.

“He’s very smart and gives you everything he got. One of the funniest kids on my team,” Lee said. “I see definitely see Deed playing on Saturdays and Sundays.”