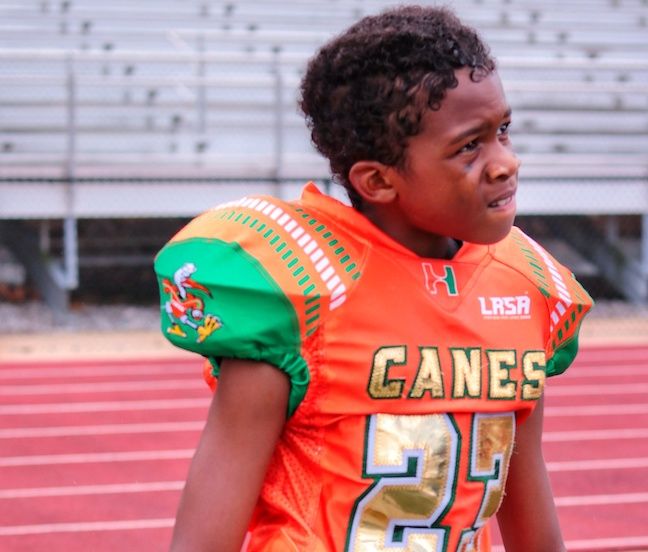 Keston Beck is one of the best players from the Birmingham, AL area in the Class of 2029.

The 3-foot-9, 79-pound Beck, who attends Our Lady of Sorrows, is a dynamic player that works as a running back, wide receiver and linebacker for the Huffman Canes. 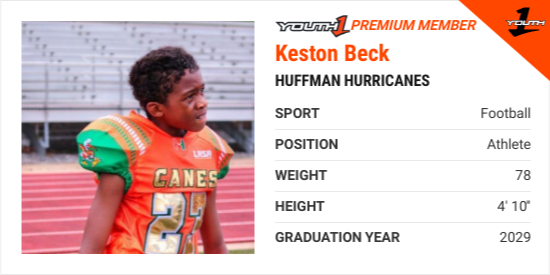 Beck has earned plenty of recognition during his outstanding career, such as winning D1 National MVP.

Beck is humbled by the accolade.

“It means a lot because I love football and I love that others see my hard work. It makes me want to keep working hard so I can get better and better,” Beck said. “It was a great experience to play against the best of the best.”

No matter the opponent, every game Beck is determined to give it his all.

Beck is going all out.

The motor is always at full throttle whenever Beck steps between the lines.

“My mindset is making the best play at all times on both sides of the field,” Beck said. “I want the other team to have to work hard for everything they get against me.”

Beck has great passion and energy whenever he’s on the field. Beck tells why he enjoys the game of football so much.

“What I love the most about playing football is being the best I can be. I love winning games with my teammates and celebrating,” Beck said. “My teammates are like brothers to me and there’s nothing like being in the locker room after we win.”

Beck has learned many valuable lessons from playing football that he applies to his everyday life.

“Playing football has taught me so much about life in general,” Beck said. “It has taught me that there is always someone better so you have to work twice as hard even when you don’t want to.”

“My favorite football memory is when I scored a touchdown on a pick-six,” Beck said. “It was a great feeling to get in the end zone and celebrate with my teammates. The crowd went crazy.”

“He can play anywhere on the field. He catches the ball at a high point and gets up the field with determination. He has great footwork. He has a variety of different skills that makes him successful on the field,” Borden said. “He’s a threat to the opponent every time he steps on the field.”

Beck takes his role as one of the leaders on the team very seriously. Beck makes sure he’s a daily positive influence on his peers.

“I try to be a good teammate by setting a good example for everyone to follow. I tell my teammates ‘Good job’ and push them to be better and not to give up,” Beck said. “The best advice I give to my teammates is to just do your job and everything else will work itself out.”

Borden adds that Beck is one of those consummate teammates that every squad needs to be successful.

“He knows he’s an alpha dog yet he is very humble and encourages his teammates,” Borden said. “He’s a team-first player and that has a contagious effect on the rest of the team to see that from him.”

Beck is appreciative of having amazing male role models that are supportive.

“My coaches have helped make me a better player and person on and off the field,” Beck said. “My coaches always tell me that hard work pays off. The best advice they give is to always stay ready no matter what.”

Borden is an advocate of Beck’s capabilities.

“Big games vs. Thoro. We were down 6-0,” Borden said. “He breaks one for about 60 yards to tie the game then comes back next possession and punches it in again to take the lead.”

In addition to making clutch plays, Beck is developing a high level of football IQ as well.

Beck is growing into excellent football awareness that puts him in position to thrive.

“He’s a very smart football player that always knows how to be in the best spots to be effective,” Borden said. “His intelligence is a major asset in addition to his athletic ability.”

Beck is on the grind to perfect and hone his craft in any way possible.

“He’s the hardest worker I know,” Borden said. “He’s always first in every drill and he works before and after practice. He sets an excellent example for the other players to fall in line.”

Beck patterns his mentality after his big brother.

“I look up to my big brother Keith. He played for Mississippi State,” Beck said. “I want to make my own name for myself and keep up the family name.”

Beck is constantly striving for greatness in everything that he does.

“My goals are to be a good student athlete and work hard so I can get an athletic scholarship to the university of my choice,” Beck said. “I strive to be the best person /player I can possibly be and my goal is to be the top player in my class.”

“I would like to attend the University of Alabama because I want some championship rings,” Beck said. “I would love to help the Crimson Tide win another national title.”

Beck lists social studies as his favorite subject in school.

“I enjoy learning about the different landmarks,” Beck said. “It’s a very fun subject to me.”

Borden lists the improvements that will take Harris’ game to the next level.

“We have been working on him squeezing the hole tight before bouncing outside, straight towards the end zone,” Borden said. “I’m confident he’s going to be able to make this adjustment.”

Borden believes the sky is the limit as long as Beck continues to stay hungry.

“I see him in an explosive offense like Clemson that has a fast pace,” Borden said. “He’s a quick learner with an excellent football IQ. He’s very coachable with a great personality.”