2028 ATH Rudolph Ingram is a wrecking ball of blazing speed

2028 ATH Rudolph Ingram is a wrecking ball of blazing speed 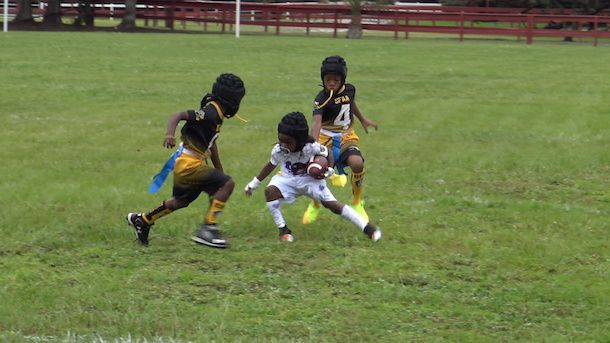 Rudolph Ingram is one of the best players from the Tampa, FL area in the class of 2028.

Ingram is currently a member of the Tampa Ravens football organization.

For his efforts, Ingram was selected as the Ravens’ team MVP for the regular season and playoffs, as he racked up 10 touchdowns last season. The previous season, Ingram produced five touchdowns in just four games.

Ingram looks up to Matt Jones, Tarik Cohen And Deanthony Thomas, all athletes that he knows personally because of his father Rudolph Ingram Sr., aka Coach Kool.

Mr. Ingram has taken on an active role in the development of his son as his personal coach and trainer.

“I know that hard work will not only get ,me awards but will also get me rewards from my dad,” Ingram said.

In addition to being a standout on the gridiron, Ingram is also a decorated track athlete.

For Ingram, track and football each serve a specific purpose to help the other.

“Track increases my speed, body control and running form and the training prepares me for football,” Ingram said. “Football keeps me active for track and being able to show off my track speed.”

Jimmy Watson is in his second season coaching Ingram with the Ravens.

Watson is stunned at the impact Ingram is already capable of having on the gridiron as a youngster.

“At running back you can count on him to put the team on his small back and carry us to the promise land. At Safety it’s unbelievable how he can make plays in the backfield. At running back he's very fast but even more elusive. The kid has vision like I've never seen in a 6-year-old before,” Watson said. “One second he's going one way and then you blink and he’s going another way.He stops on the drop of a dime And runs so aggressive. The kid is one in a million at safety. He's so fast. He gets to the ball in the backfield and has great hips. I’ve yet to see someone put a move on him. The kids is an all-around great player.”

Down by seven last year in the second round of the playoffs against the Sarasota Packers with 15 seconds left in the 4th quarter, Ingram broke free for an 80-yard touchdown.

“That’s just another example of how he puts the team on his back,” Watson said.

Watson recalls another dynamic moment from Ingram that occurred in a jamboree contest.

The athlete is vaunted for his ability to battle through fatigue.

“We were on defense. I called a timeout and asked Blaze if he wanted to rest up for two plays. He said no and scored on his first carry right up the sideline,” Watson said.

Ingram is one of the main motivators to keep his teammates in a positive mental space.

“I work hard at practice to set the bar high for my teammates. I want to show them we need to give it all we’ve got. If they don’t know how to do something, I show them how to do it,” Ingram said. “I always tell them ‘You practice how you play.’”

Much of that is a credit to his father.

“I let him know: ‘You’re very talented and the top in your age because you’ve worked for this.’” Mr. Ingram said. “The only way you will continue to be great in sports is to continue preparing yourself.”

Ingram’s consistency is something that’s become contagious for his teammates.

“Well he's not much of a talker. But I can say he never had a bad practice and he just has this attraction to kids of all ages,” Watson said. “My players see Blaze doing something they'll be right behind him. His eyes are always on the prize. If one of his fellow teammates slacks, he walks up to them individually and calls them out on it.”

Ingram is always aware of his surroundings on each play. Watson draws a comparison to one of the most alert animals.

“He watches everything on the field. He's like a squirrel,” Watson said. “And you know how hard they are to catch.”

No what how impressive of a game he has, Ingram never settles on his past performances. He’s constantly searching for ways to improve.

“His work ethic is through the roof,” Watson said. “ I remember one night I called his dad after practice. I heard him say: “Daddy I don’t think i scored enough. Let’s go train.’”

Mr. Ingram is beyond words for the level of admiration he has for not only the type of player his son is, but also the character he displays.

“I'm overly proud of him as a father, trainer and coach not only because he does extremely well but because it's what they don't see,” Mr. Ingram said. “He works hard, he's so respectful, always keeps a smile on his face and accepts the limelight so humbly. His future is so bright. I'm just in awe  to be a part of it.”

Watson outlines the next area of improvement to take Ingram’s game to the next level.

“We started working on him with screen passes,” Watson said. ‘He's still 50/50 on that but we're working on it.”

Watson sees flashes of young Warrick Dunn while he was shining at FSU in the up-and-coming Ingram.

“He's the smallest on the field,” Watson said. “But if you give him three plays he's going to break one.”

Ingram has his sights set on eventually playing for the Florida Gators.

Watson has no doubt in his mind that Division I football and beyond is in store for Ingram as long as he continues with his work ethic.

“I feel like he will dominate on every level,” Watson said. “He has a heart of a lion and is always trying to learn and train.”