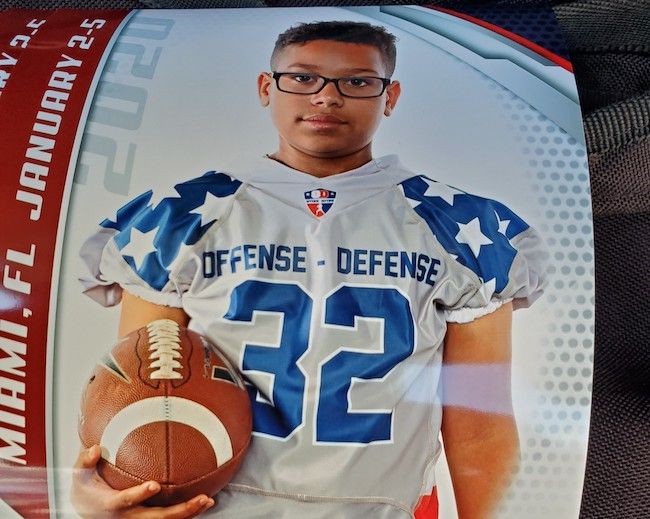 Renaldo Riggins is one of the best players from the Orlando, FL area in the Class of 2026.

The 4-foot-9, 97-pound Riggins, who attends Narcoossee Middle School, is a dynamic player that works as a running back. 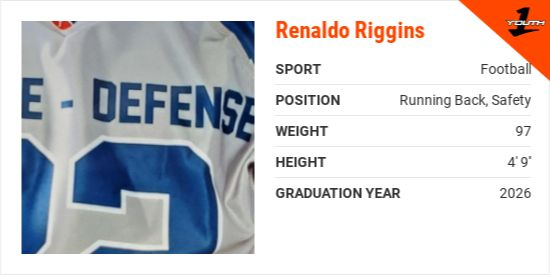 Riggins has earned plenty of recognition during his career, such as being selected for the Offense-Defense All-American game three times.

Riggins is humbled by the accolades.

“It means that I showed improvement and that my hard work means something to not just me but to my coaches, parents and teammates that helped me get there,” Riggins said. “There were more people than usual. I was nervous playing with kids from all over. But overall I enjoyed the experience of it all.”

No matter the opponent, every game Riggins is determined to give it his all.

Riggins is going all out.

The motor is always at full throttle whenever Riggins steps between the lines.

“My mindset is to go out there and get the job done,” Riggins said.

Riggins has great passion and energy whenever he’s on the field. Riggins tells why he enjoys the game of football so much.

Riggins has learned many valuable lessons from playing football that he applies to his everyday life.

“I’ve learned that I need to give it 100 percent at all times and have patience,” Riggins said.

“It was my first year playing and I just remembered running and this kid tackled me out of nowhere,” Riggins said. “Then the next play I tackled him causing him to fumble.”

Riggins takes his role as one of the leaders on the team very seriously. Riggins makes sure he’s a daily positive influence on his peers.

“I demonstrate being a good teammate by leadership, complimenting my team and teammates, encouraging my teammates to keep going even when they are tired or we are losing, and help them be better at their position with positivity,” Riggins said. “When a lot of kids are first year players they are afraid to hit so I show them how to tackle. When they do it I encourage them. I tell them to keep giving 100 percent, but at the end of the day make sure to have fun because it is still a game.”

Riggins is appreciative of having amazing male role models that are supportive.

“My coaches have taught me patience and listening skills,” Riggins said. “The best advice they give is that whatever you do, do it with 100 percent effort.”

Riggins patterns his mentality after this star athlete.

“I look up to Marshawn Lynch because of the amount of energy he plays with,” Riggins said. “He plays through the whistle. He is not down till the whistle blows.”

Riggins lists P.E. as his favorite subject in school.

“It gives me time to lose some energy so I'm not that hyper in class,” Riggins said.

Riggins explains his collegiate aspirations down the road.

“I want to play at Alabama,” Riggins said. “I have been a fan of the school, the team and coach Saban ever since I can remember.”

Riggins is striving for greatness in all that he does.

“My goals off the field are to get what I need done before it is due whether it is school work or chores at home,” Riggins said. “On the field my goal is to compete with sportsmanship. Winning is great but if you don't have good sportsmanship it doesn't mean as much.”