Elijah Manzanares is one of the best players from the Sahuarita, AZ area in the Class of 2026.

The 5-foot, 100-pound Manzanares, who attends Sahuarita Middle School, is a dynamic player that works as a quarterback, running back and defensive back for Sahuarita 49ers 12U. 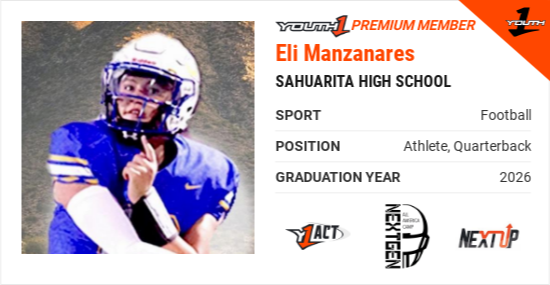 Manzanares has earned plenty of recognition during his career, such as being selected for the AZ Youth All-Star Classic. Manzanares has also competed in the following camps this year:

Manzanares is humbled to compete against the best of the best.

“It shows that if you are dedicated and work hard anything is possible,” Manzanares said. “It was great to compete with and against the best in my class to build relationships and make new teammates. It was a very positive experience.”

No matter the opponent, every game Manzanares is determined to give it his all.

Manzanares is going all out.

The motor is always at full throttle whenever Manzanares steps between the lines.

“My mindset is to do all I can to make the teammates around me better,” Manzanares said.

Manzanares has great passion and energy whenever he’s on the field. Manzanares tells why he enjoys the game of football so much.

“I love the relationships I make with my coaches and teammates,” Manzanares said.

Manzanares has learned many valuable lessons from playing football that he applies to his everyday life.

“I’ve learned that there will be ups and downs but if you work hard and play together, people are capable of anything,” Manzanares said.

“My favorite memories are just every time we win,” Manzanares said.

Manzanares takes his role as one of the leaders on the team very seriously. Manzanares makes sure he’s a daily positive influence on his peers.

“I demonstrate being a good teammate by putting the team first,” Manzanares said. “I am always willing to do whatever it takes to help my team. I have a good attitude and lead by example. The best advice I give is to play for each other.”

Manzanares is appreciative of having amazing male role models that are supportive.

“I’ve learned that you have to work hard and be coachable with a good attitude. Through hard work and dedication anything is possible,” Manzanares said. “The best advice I’ve gotten is that the only thing that anyone can control is their effort. There can always be perfect effort.”

Manzanares patterns his mentality after this Super Bowl champion quarterback.

“I look up to Russell Wilson because of the way he leads his team on and off the field,” Manzanares said. “He never let the fact that he was undersized stop him from being one of the best QBs in the NFL.”

Manzanares lists math as his favorite subject in school.

“I enjoy finding the solution to a problem,” Manzanares said.

Manzanares maintains a rigorous schedule to stay sharp, consisting of:

Manzanares describes what he believes separates himself from the pack.

“I’m the hardest worker on the field,” Manzanares said. “I’m strong, fast and agile with a high football IQ. I lead by example and always put the team first.”

Manzanares is striving for greatness in all that he does.

“I want to graduate top of my class and be an Academic All-American,” Manzanares said.