Among the nation's rising talents from the 2026 class is Juan Garcia-Okoi, who needs to be on your radar as an athlete that's next up. With his dynamic playmaking ability, Garcia-Okoi is building a reputation for gashing defenses and putting points on the scoreboard. 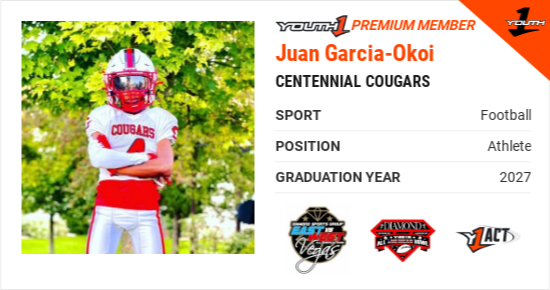 Coaches that have crossed paths with Garcia-Okoi have also noted his remarkable play.

"The kid is a baller," Coach Shawn Caron of the Coon Rapids Cardinals said. "He plays at another level than the rest," said Coach T Quick of the Minnesota Chiefs.

The Minnesota bred rising talent is an athlete that shines no matter where he's placed on the field. He has the type of talent that always turns heads and always makes a major impact on his team. Garcia-Okoi plays Cornerback, Running Back, and Kick Returner and Punt Returner, on Special Teams.

Standing at 4'9" 77 lbs., Garcia-Okoi is typically one of the smaller athletes on the field, but that has never stopped him from being one of the best players. He's dynamite with the ball in his hands, hitting the hole with purpose and using his speed to outpace defenders as he finds more daylight. His quickness in and out of cuts is impressive. He's a nightmare for defenders in the open field.

On defense, Garcia-Okoi shines at Cornerback with his ability to stick with receivers and make a play on the ball.

Garcia-Okoi's been playing ball since age 4 with his Father.

"I am 11 and started playing football with my dad when I was 4.  I played on my first team when I was 7 years-old," Garcia-Okoi told Youth1.com.

"I love being a leader," he added.

Others have begun to take notice of the budding talent Juan has. He's recently received an invite to NextGen's The Show and FBU Top Gun, which are two of the elite Youth Football showcases in the nation.

Some of Garcia-Okoi's long-term goals include getting a D1 football scholarship, being a two-way starter, and being a 4.0 student. His top college choices right now include Alabama, Minnesota, Georgia, Clemson, and Ohio State.

At the ripe age of 11, Garcia-Okoi has already found something he's passionate about and he's driven to get better. Most of all, he just loves to compete.

"I want to be the best at what I do. I understand there is a lot of competition, and I got to compete against them," Garcia-Okoi said.

"I am willing to work harder," he added.

Juan's Father, Cedric Okoi, speaks highly of his son and believes he has what it takes to accomplish his dreams.

"Juan. ..I mean Jay-Money as we call him is just a compassionate kid who cares for others and has the ability at 11 years old to understand what he has to do to accomplish his dreams," Cedric said.

"I have always tried to inform jay of everything that is out there regarding: training, competition, teams, traveling, high school, coaches, college, and much more. I have exposed him to as much football competition an 11-year-old can have. And he has excelled," he added.

As he prepares to take his game to the next level, Juan has been doing Running Back drills and working on his Cornerback coverage technique, among other things.

2026 CB/RB Juan Garcia-Okoi is a rising talent from Lino Lakes, MN. He's working diligently to make his lofty dreams come true. With his level of talent and dedication, it will be a joy to follow his journey from here.

For more on Juan Garcia-Okoi check out his Youth1 Player Profile -> here.