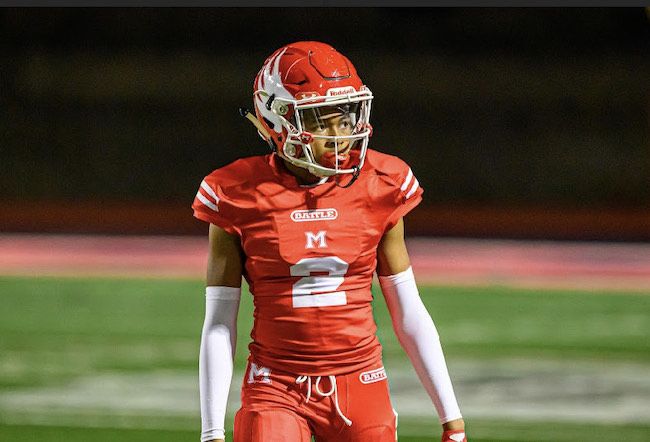 Dylan Lewis is one of the best players from the Atlanta, GA area in the Class of 2025.

The 5-foot-10, 145-pound Lewis, who attends Milton High School, is a dynamic player that works as a wide receiver and defensive back. 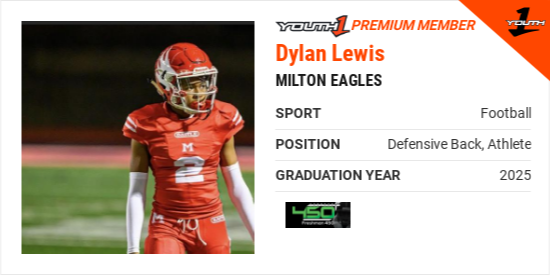 Lewis has earned plenty of recognition during his career, such as being selected to the Hotbed Youth All-American Game, ranked as No. 22 eighth grader in the country by Youth101, and nominated for the Born 2 Compete DB of the Year award.

Lewis is humbled by the accolades.

“These awards mean a lot to me because it shows that all of my hard work is paying off,” Lewis said. “Overall it was a great experience at the events. I was able to compete against the best of the best.”

During his eighth grade year, Lewis had had 5 interceptions, 4 touchdowns, and 17 pbu.

No matter the opponent, every game Lewis is determined to give it his all.

Lewis is going all out.

The motor is always at full throttle whenever Lewis steps between the lines.

“My mindset when I get to play the game of football is to focus on my job.  Give 100 percent effort, leave everything on the field,” Lewis said. “I will have no regrets on how I played during the game.”

Lewis has great passion and energy whenever he’s on the field. Lewis tells why he enjoys the game of football so much.

Lewis has learned many valuable lessons from playing football that he applies to his everyday life.

“My favorite memory of football happens when I got my first touchdown,” Lewis said. “I knew then football was meant for me.”

Lewis takes his role as one of the leaders on the team very seriously. Lewis makes sure he’s a daily positive influence on his peers.

“Being a good teammate means that you will lead your teammates when they're wrong, push them to their max, and make everybody around you better,” Lewis said. “My best advice I give my teammates is to give 100 percent effort every time, it takes zero talent for effort.”

Lewis is appreciative of having amazing male role models that are supportive.

“I have learned from my coaches that life is hard, and when it knocks you down, get up and keep fighting,” Lewis said. “The best advice I’ve gotten is that hard work pays off and there is no shortcut for hard work.”

Lewis patterns his mentality after this standout.

“I look up to Jalen Ramsey because when he steps on the field, he has the mindset that he’s going to out work anybody on the field,” Lewis said.

Lewis lists science as his favorite subject in school.

“The process on how all living things are created is very interesting to me,” Lewis said.

“My top college choices are whoever gives me a chance at free education and to play the game I love,” Lewis said.

“I train with Justin Miller, one of the top Trainers in the Atlanta area. You can find him @trainingwithjay on IG,” Lewis said. “My workouts consist of DB technique, strength, speed and agility.”

Lewis is striving for greatness in all that he does.

“My goals for high school are to start varsity as freshman, finish the season with 4 picks and 20 pbu,” Lewis said.

Lewis describes what he believes separates himself from the pack.

“My work ethic sets me apart from other players,” Lewis said. “I spend countless hours working on my technique, in the weight room, film study and speed work on the field to get faster.”