2025’s David Borrero dreams of lining up for LSU

2025’s David Borrero dreams of lining up for LSU 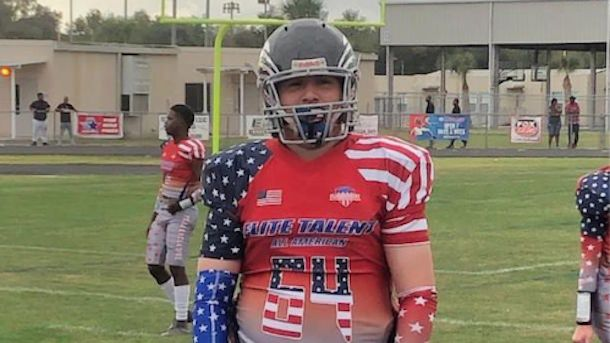 David Borrero is one of the best players from the Orlando, FL area in the Class of 2025. .

The 6-foot, 234-pound Borrero, who attends Meadow Woods Middle School, is an imposing player that works as an offensive and defensive lineman.

Borrero, a member of the Osceola Panthers, has received plenty of recognition during his outstanding career, such as: Big Blocker Award (2017), Florida Elite Pro-Bowl selection, Under Armor Combine sponsored, Elite All-American Talent Athlete (2018) and Gridiron Kings All American Bowls selections  (2017/2018).

Borrero is humbled by the accolades.

I feel proud to be selected to play in these events and happy that I put in hard work throughout the seasons and off seasons. I also feel like I need to stay hungry and aggressive, so I can continue to get better,” Borrero said. “I felt very excited to be selected to play in those games because only a few athletes got picked.  I was happy to play against very talented players and be able to prove what I can do as a lineman.”

No matter the opponent, on each snap Borrero is determined to give it his all.

Borrero is going all out.

The motor is always at full throttle whenever Borrero steps between the lines.

“I want to dominate the field and the player in front of me in every game and in every play,” Borrero said. “I think about my training from my coaches and I get myself ready to push as hard, fast and as strong as I can.”

Borrero has great passion and energy whenever he’s on the gridiron. Borrero tells why he enjoys the game of football so much.

“I can use my size to my advantage,” Borrero said. “I really like being physical and being able to defend the line and push through the line.”

Borrero has learned many valuable lessons from playing football that he applies to his everyday life.

“Football has taught me that hard work always pays off,” Borrero said.

“My favorite memory of playing involved being a defensive tackle and stripping the ball from the quarterback,” Borrero said. “I ran the ball for 55 yards and scored my first touchdown ever.”

Chrispin Johnson has coached Borrero for four years with the Osceola Panthers and trained him two years with Apex Bully.

Borrero takes his role as one of the leaders on the team very seriously. Borrero makes sure he’s a daily positive influence on his peers.

“I am a supportive teammate and I try to keep my team focused. I always play at 100 percent because I don’t want to let my team down. I talk to my teammates on and off of the field and if a mistake happens I say it’s okay and we’ll get it back,” Borrero said. “Keep working hard because no one can beat you.  No one has worked harder than you. No one can stop you and keep pushing. You got this.”

Johnson adds that Borrero is one of those consummate teammates that every squad needs to be successful.

“David’s had the chance to be a part of several All-American games and Super Bowl championship teams,” Johnson said. “His leadership is shown through his everyday action in practice along with his execution in games and his ability to understand what a team needs at crunch time.”

Borrero is appreciative of having amazing male role models that are supportive.

Johnson is an advocate of Borrero’s capabilities.

“David is consistent so it’s hard to pick out a particular big play that he’s been a part of. He’s always in the right place at the right time on the defense,” Johnson said. “As an offensive lineman he’s a go-to person and when it’s fourth and inches he’s always the person that you can run to his side.”

In addition to making clutch plays, Borrero also has a high level of football IQ as well.

Borrero has excellent football awareness that puts him in position to thrive.

“David understands what leverage means in a game in the trenches. He’s always able to understand which direction we need to block a defensive lineman,” Johnson said. “On offense he understands leverage, momentum, and angles.”

Borrero is on the grind to perfect and hone his craft in any way possible.

“David has an amazing work ethic. He’s always ready to put on his hard hat and go to work. He trains consistently,” Johnson said. “He’s always able to work on adjustments whether it be stance, getting his first foot in the ground, or attacking another lineman.”

Johnson explains why he compares Borrero to this player.

“He reminds me of Alejandro Villanueva,” Johnson said. “He’s tall, big frame, aggressive and skill savvy. He’s also a very disciplined player and understands how important it is to do your job.”

Borrero patterns his mentality after the standout.

“My favorite player is Pittsburgh Steelers offensive lineman Alejandro Villanueva,” Borrero said. “I really like him because he served in the military like my older brother who is in the Army and he plays for my favorite team.  Alejandro dominates in his position and motivates me to get better.”

Borrero is constantly striving for greatness in everything that he does.

“I want to become an NFL player and also I want to be a herpetologist,” Borrero said. “I love football and reptiles.”

Borrero has his sights set on becoming an LSU Tiger.

“They were the first college team I ever watched on television and they won their game.  I really like that they play physical and hard football,” Borrero said. “They also have Mr. Pancake, offensive lineman Kardell Thomas playing for them.”

Borrero lists math as his favorite subject in school.

“I am good at it and I think it is fun to solve problems,” Borrero said.

Johnson outlines the areas of improvement that will take Borrero’s game to the next level.

“David like most offensive or defensive lineman can consistently improve footwork, hand placement and power through his hips. David being a part of our Apex Bully Lineman system is constantly working to improve his footwork through jump rope and ladder skills,” Johnson said. “We also work a lot of power extension through the hips whether it be triple extension with a dumbbell lift, medicine ball press or bag work.”

Johnson believes the sky is the limit as long as Borrero continues to stay hungry.

“David has shown amazing skill sets at the youth level. He’s only going to get better as he matures into his body,” Johnson said. “Having such a huge height advantage and growth over most of his teammates and other players he continues to show with age comes dominance.”