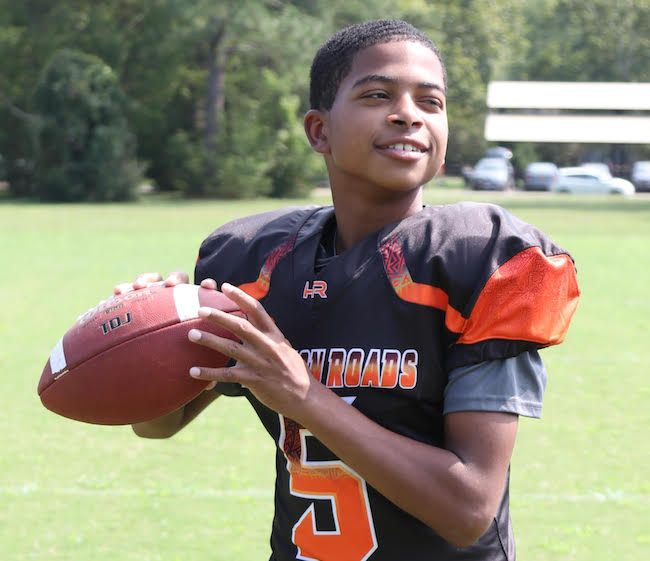 Saeed Williams is one of the best players from the Newport News, VA area in the Class of 2025.

The 5-foot-7, 131-pound Williams, who attends Hampton Roads Academy, is a dynamic player that works as a quarterback, linebacker, and safety.

Williams has earned plenty of recognition during his career, such as:

“Those accomplishments mean a lot and I’m grateful for being recognized but I have a lot more work to do,” Williams said. “The experience was awesome. I got to meet new friends from all over the country that I still talk to today. “

No matter the opponent, every game Williams is determined to give it his all.

“My mindset for football overall is to be a leader on and off the field whether it’s by being vocal or showing by actions,” Williams said.

Williams has great passion and energy whenever he’s on the field. Williams tells why he enjoys the game of football so much.

“I love when I or my team scores,” Williams said. “The feeling is great.”

“Playing football has taught me to never give up,” Williams said. “It’s going to take hard work to get what you want.”

“Winning the regional championship in the AFY to make it to Florida for Nationals,” Williams said.

“I demonstrate leadership by giving it all I got every play and showing good sportsmanship throughout the game. Pretty much leading the right way,” Williams said. “The best advice I’ve given my teammates is that nothing will be given to you. You have to earn it.”

“From my Coach Laphea, he always told me to think and act like a QB, meaning be a leader, be smart, do what’s right and take ownership for your own actions,” Williams said. “The best advice I’ve gotten is to never settle for second best.”

Williams patterns his play after these dual-threat quarterbacks.

“I look up to Lamar Jackson because they all told him he couldn’t be a QB. Deshaun Watson because he is Superman and went to Clemson. Patrick Mahomes because he is so creative,” Williams said.

Williams lists math as his favorite subject in school.

“It just comes so easy to me and my dad always told me to be good with numbers and percentages because it’ll work in my favor soon,” Williams said.

“I am doing QB workouts with my QB Coach T.Free, Coach Whitcomb, and Quincy Avery,” Williams said. “I got my agility coaches Scorpio Brown and Dustin Johnson.”

Williams describes what he believes separates himself from the pack.

“What sets me apart is my attention to detail. I’m ready to learn. Since school has been out I’ve been working out three times a day,” Williams said. “My parents harp on having great character so I always try to be better than my yesterday. I’m always trying to throw a better ball than my last one. I’m also pretty fast.”

Williams is striving for greatness in all that he does.

“My goal for high school is to break any records I can while the team succeeds of course as well as preparing myself for college,” Williams said.