2025 QB Ricky Simmons III is one of Georgia's rising stars

2025 QB Ricky Simmons III is one of Georgia's rising stars 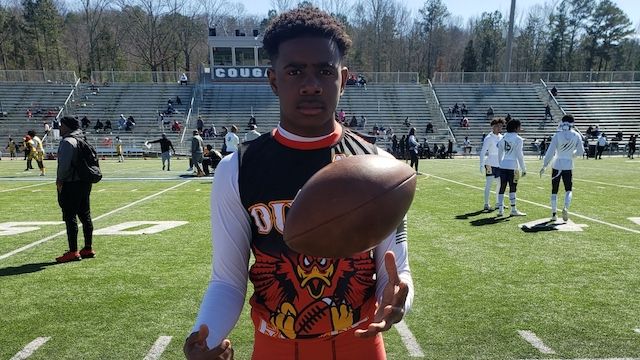 The state of Georgia is known as a hotbed for football talent. From the youth through the college ranks, talented football prospects seem to ooze out of The Peach State. Among the rising stars from the state of GA, is 2025 QB Ricky Simmons III, who's rapidly building a reputation for his ability on the football field.

This past fall, Simmons was named to Youth1's Next Up Watchlist. For those unfamiliar, The Next Up Watchlist identifies the budding young talents entering the 7th grade. Being named to this list is a testament to Simmons' talent.

Simmons doesn't play for the accolades, he plays because he enjoys leading his team. The young QB just loves going out there and making plays.

"As a natural born leader I enjoy being the head of the team," Simmons told Youth1.com.

"Completing passing, and going through my reading progressions," Simmons added about his favorite part of playing football.

Standing at 5'7 145 lbs., Simmons is an extremely polished Quarterback especially for his age. His ability to make any throw needed is impressive. He can stand tall in the pocket, make his reads, then deliver a strike. His supreme mobility allows him to adjust on the fly and make throws on the move with accuracy. Perhaps most impressive, is how sound his throwing mechanics are. Simmons' feet are always in concert with his throwing arm, allowing him to deliver each ball with strength and precision.

"Arm strength and defense manipulation," Simmons said of his strengths.

Simmons progress is evident, as he continues to push himself to improve. His workout routine includes 3 days of field work and 2 days in the weight room.

"I feel like I’m going in the right direction, I continue to improve my craft with each season and each camp and tournament I’ve had the opportunity to be a part of," Simmons said of his progression.

This spring, Simmons plans on competing in Under Armour, FBU and NextGen events. He's eager to work on his footwork and understanding of the X's and O's.

The Grayson, GA native most recently played for the Grayson Rams. Some of his recent achievements include winning Offensive Player of the Year, 2x Top Gun All American and OD Camp MVP.

2025 QB Ricky Simmons III is a rising star from the ultra talented state of Georgia. Simmons is the type of budding talent that coaches and scouts get truly enthused about.

It will be a pleasure following his progress from here.

For more on Ricky Simmons III, check out his Youth1 Player Profile -> here.