2024’s Elijah Walker wants to be the next J.J. Watt | Youth1
Skip to main content 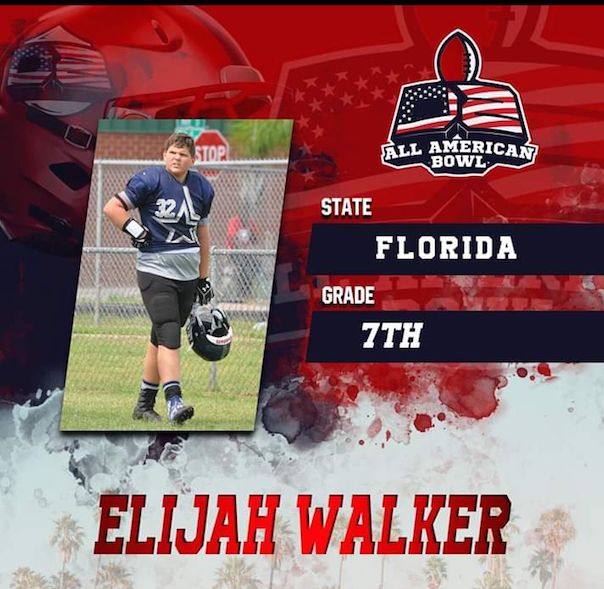 Elijah Walker is one of the best players from the Orlando, FL area in the Class of 2024.

The 6-foot-2, 228-pound Walker, who attends Creekside Middle, is an imposing player that works on both sides of the ball as an offensive and defensive lineman.

Walker, who plays for the Daytona Cowboys, is in the running for Defensive Player of the Year in his league.

Walker would be humbled by the accolade.

“I initially was not very good and coming full circle to be recognized by my teammates and coaches is awesome,” Walker said. “Having been to the Super Bowl with FSYFL twice was an experience that I enjoyed and have a taste for. These new events taking place this year.... Grid Iron Kings at IMG, D2 All American Bowl in Daytona, and now with Chad in the AUG Central Florida All Stars up in Thomasville, Georgia will get me ready to battle better talent in the future.”

No matter the opponent, on each snap Walker is determined to give it his all.

Walker is going all out.

The motor is always at full throttle whenever Walker steps between the lines.

“I am a predator. I love to hunt players who carry the ball plain and simple,” Walker said. “My mindset and confidence tells me nobody can stop me.”

Walker has great passion and energy whenever he’s on the gridiron. Walker tells why he enjoys the game of football so much.

“The biggest rush to me is the physical contact,” Walker said. “I have an adrenaline rush that is not explainable.”

Walker has learned many valuable lessons from playing football that he applies to his everyday life.

“Football has taught me so much about life in general,” Walker said. “It has taught me how to have a strong work ethic and how that will carry you far in life.”

“Last year I was told by the Port Orange team that I was no longer allowed to hit my own players for fear I would hurt them. My dad temporarily removed me from the team as he felt this was not fair and this only lasted for the evening,” Walker said.  “The coaches called my dad to apologize and work things out and I played that following Saturday morning. I had the game of my life and our team held the opposing Daytona Game Changers scoreless and we went on to play in the Super Bowl.”

Don Hudson is in his first season coaching Walker for the Daytona Cowboys.

“Offensive tackle good hands, technical, great size and speed that can handle speed rushers on pass and a dominant bull rusher that open lanes  for runners to have fun in. He’s aggressive. He’s a coach’s dream,” Hudson said. “The kid is very coachable, eager to learn. Besides his size and speed he makes his teammates better. He helps those around him.”

Walker takes his role as one of the leaders on the team very seriously. Walker makes sure he’s a daily positive influence on his peers.

“I try my best to keep the morale up on the field. We as a team always talk with our pads not our mouths,” Walker said. “If we are behind in the score to keep grinding and keep the level of intensity high.”

Hudson adds that Walker is one of those consummate teammates that every squad needs to be successful.

“Natural born leader. He is just as good as the best and good as the worst,” Hudson said. “No teammate left behind. Willing to go the extra mile.”

Walker is appreciative of having amazing male role models that are supportive.

“I’ve learned as a player to know that if a play goes wrong to clear that out of my mind and focus on the next play. As a person Coach G as well as Coach Hudson makes me aware that this is all not possible without the support from our families,” Walker said. “When playing D-Tackle they tell me to stay low, head up, and be aware of the ball location at all time.”

Hudson is an advocate of Walker’s capabilities.

“We were up 13-7 with 4th and short and no time on clock,” Hudson said. “He came through, beat his guy off ball and made a bone crushing sack in the backfield to end game.”

In addition to making clutch plays, Walker also has a high level of football IQ as well.

Walker has excellent football awareness that puts him in position to thrive.

“He has the physical strength and size and moves just as fast as the athletes on the field so I teach techniques for him to learn the game,” Hudson said. “He is becoming a student of the game on and off the field.”

Walker is on the grind to perfect and hone his craft in any way possible.

“His work ethic is always first never last,” Hudson said. “I make him run the the skilled positions not the lineman and challenge him to never be last.”

Hudson explains why he compares Walker to this player.

“He’s a lot like Jachai Polite from Florida,” Hudson said. “He does the same things on the field and brings the same mentality.”

Walker patterns his mentality after this standout.

“Pro hands down is JJ Watt.  I wore his number this year and try to mimic his style with my own added abilities,” Walker said. “College would have to pick someone who now also is in the pros but I watched him since I was a little: Joey Bosa is an awesome player.”

Walker is constantly striving for greatness in everything that he does.

“I want to be the best player at my position and eventually make enough money to buy a sports complex to help kids who cannot afford to play sports,” Walker said.

Walker has his sights set on becoming a star in college before the pros.

“UCF, Ole Miss, or LSU would be my choices,” Walker said. “All of those schools have good programs that I can see myself doing well in.”

Walkerlists science as his favorite subject in school.

“I love science,” Walker said. “Learning about how things change with our Earth as far as chemical and layers of our planet. I grew up watching Bill Nye the Science Guy.”

Hudson outlines the areas of improvement that will take Walker to the next level.

“Conditioning to play every play of the game and full speed he takes snaps on both sides of the ball,” Hudson said.

Hudson believes the sky is the limit as long as Walker continues to stay hungry.

“He can make it to the NFL if he stays focused,” Hudson said. “He’s a special player and I look forward to him having a great career.”