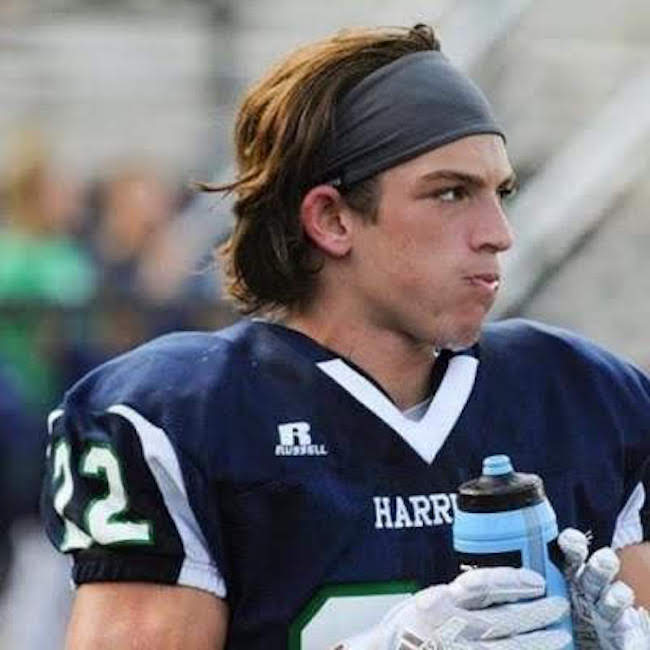 Grayson West is one of the best players from the Harrison, GA area in the Class of 2023.

The 5-foot-9, 165-pound West, who attends Harrison High School, is a dynamic player that works as a running back and linebacker. 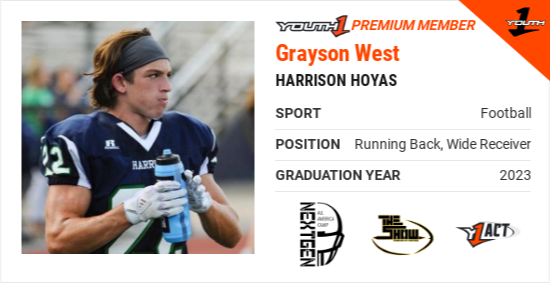 West has earned plenty of recognition during his outstanding seven-year career, such as being MVP of the NUC All American Camp and a three-time GMSAA All-Star.

West is humbled by the accolades.

“At the time I received them they meant a lot; I was proud of the honor recognition, but now I see them a little differently. It’s hard to single out one person for an award when it takes 11 individuals to make a play,” West said. “I’ve always enjoyed All-Star events because they give you a chance to compete against other top talents. My dad always says the best way to grow as an athlete is to challenge yourself against the best.”

No matter the opponent, every game West is determined to give it his all.

West is going all out.

The motor is always at full throttle whenever West steps between the lines.

“My mindset is to score every time I touch the ball,” West said.

West has great passion and energy whenever he’s on the field. West tells why he enjoys the game of football so much.

“I love working hard during the week leading up to a game and seeing the positive results,” West said.

West has learned many valuable lessons from playing football that he applies to his everyday life.

“I’ve learned the more you invest in something, the greater the reward will be in the end,” West said.

“The first time I scored. I was in fourth grade and had played just about every position mainly because I wasn’t very good at any of them, and the coach decided to play me at running back for the first time,” West said. “On my second or third carry I ran between the tackles and broke one lose for about a 60 yard touchdown. That was the moment I fell in love with the sport.”

“He’s aggressive, has great speed, great reactions and is a tough kid,” Storey said. “He has good tackling form and at running back makes great cuts with his footwork.”

West discusses what separates him from other players.

“I’ve been blessed with speed and the ability to jump higher than most,” West said. “But what really sets me apart from other athletes is my competitive nature. It drives me to outwork others.”

West takes his role as one of the leaders on the team very seriously. West makes sure he’s a daily positive influence on his peers.

“I’m not a big rah, rah guy on the field. I prefer to let my actions whether it’s during practice or a game to motivate my teammates to always play hard and to respect your coaches and the game,” West said. “The best advice I give is is to make your block so I can score (joking!). Seriously; to always be working to get better no matter the season.”

Storey adds that West is one of those consummate teammates that every squad needs to be successful.

“He demonstrates leadership through his actions on the field,” Storey said. “He doesn't say much, is humble, and always plays hard, including practice.”

West is appreciative of having amazing male role models that are supportive.

“I’ve learned from my coaches to always challenge yourself to be better and never be satisfied both on and off the field,” West said. “The best advice they’ve given is to stay calm in the heat of battle, especially when tension is at its highest.”

Storey is an advocate of West’s capabilities. West gained over 12 yards per carry in a limited role. West also return kicks. The only time an opponent kicked to West,  it was returned 80 yards for a touchdown.

“He had a kick return for a touchdown vs. Allatoona and broke a 40-yard touchdown to seal a victory as well,” Storey said.

West is on the grind to perfect and hone his craft in any way possible. Storey loves West’s drive and determination.

West breaks down his training routine.

“I run hills, do ladders, and jump squats,” West said.

West is constantly striving for greatness as an athlete.

“I want to start for my varsity team as a sophomore and be recognized at season’s end as one of the top, complete running backs in the county I live in,” West said. “By the end of my junior season, I want to make First-Team All-State. The end of my senior season, I want to be a First-Team All American and recognized as one of the top running backs coming out of high school.”

“I would like to attend UGA, Clemson, LSU, UF or FSU,” West said.

“School has never come easy, so in order to do well I have to work harder than most. For example, I go to school one hour early every day to get extra help,” West said. “As a result, it has taught me discipline, and to never give up just because something is difficult. I currently have straight A’s, and have a personal goal to get all A’s through high school.”

West lists marketing as his favorite subject in school.

“Social media plays such a large role in today’s world,” West said. “I want to be an expert at marketing myself.”

Storey lists the improvements that can take West’s game to the next level.

“Just getting more grasp of understanding the defense and offense,” Storey said. “He’s a freshman so he has a long way to go to understand our system.”

Storey believes the sky is the limit as long as West continues to stay hungry.

“He has an opportunity to impact our varsity team as a sophomore,” Storey said. “With his work habits and talents, he could be very good for us.”