2023 St. Louis bruiser Miles McVay is being called the next Orlando Pace

2023 St. Louis bruiser Miles McVay is being called the next Orlando Pace 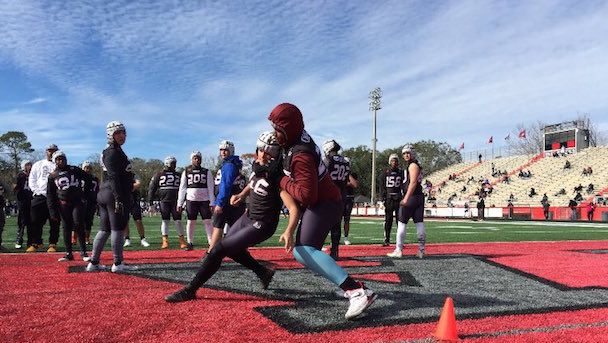 Miles McVay is one of the best players from the St. Louis, MO area in the Class of 2023.

McVay has already received plenty of recognition during his outstanding youth football career, such as:

McVay is humbled for the opportunities to showcase his skills against the best of the best.

No matter the opponent, on each snap McVay is determined to give it his all.

McVay is going all out.

The motor is always at full throttle whenever McVay steps between the lines.

“My mindset at my position is ​to protect the quarterback, no matter what,” McVay said.

McVay has great passion and energy whenever he’s on the gridiron. McVay tells why he enjoys the game of football so much.

“What I love most about playing football is the team, how we all battle to gather for the same cause and become one,” McVay said.

McVay has learned many valuable lessons from playing football that he applies to his everyday life.

“Playing football has taught me you have to fight through tough times,” McVay said.

“​Going to the JFL Super Bowl for the first time,” McVay said. “Because after several years of trying we finally made it.”

“I've played against him for 6 years and I must say that it is an absolute honor to coach a young man with so much potential.  Meaning, I've trained with him at the same facility for years and watched him grow and understand the game and how his position contributes to the team's overall  success,” Boyd said. “Whether it's guard or tackle, and on either side of the ball, Miles is a force to be reckoned with. I knew first hand that Miles provides protection to the ball carrier and he finishes his blocks with a level of veracity that makes his peers respect him.”

“Miles is a technician in that he has been trained consistently on the intricacies of run blocking and pass blocking. So whether in the run game and he's zone blocking, power blocking, and/or pulling,” Boyd said. “Miles has the technical abilities to perform these tasks at a high level.  Likewise, his pass blocking sets are extremely sound and one can make an instructional video on his stance, arm techniques and power steps.”

McVay takes his role as one of the leaders on the team very seriously. McVay makes sure he’s a daily positive influence on his peers.

“I demonstrate being a good teammate by ​just working hard, and allowing my teammates to follow,” McVay said. “I tell my teammates just relax and calm down and play your game.”

Boyd adds that McVay is one of those consummate teammates that every squad needs to be successful.

“It's easy to determine that Miles is a leader on the football field if you've been around him for 5 minutes or more,” Boyd said. “Reason being is that he leads by example, meaning his hard work and dedication to his trade is second to none.  Likewise, the fact that he is 6-foot-4 and 275 pounds and knowledgeable about his position, it's easy for his teammates to follow his lead.”

McVay is appreciative of having amazing male role models that are supportive.

“​They tell me to work hard at everything you do and if you make a mistake, there is no need for an explanation, just do it right the next time,” McVay said.

Boyd is an advocate of McVay’s capabilities.

“I anticipate Miles opening holes and contributing to the explosiveness of our offense,” Boyd said.

In addition to making clutch plays, McVay also has a high level of football IQ as well.

McVay has excellent football awareness that puts him in position to thrive.

“It's been well documented that O-lineman are some of the smartest players on the field and it will be expected that Miles continue this theory.  However, I know that Miles understands the game from the offensive side of the ball, but it will be up to our coaching staff to teach him how to attack 1, 3 and 5 technique interior D'lineman,” Boyd said. “Considering that he is a well versed talent, I assume that he will come off the field, and to the sidelines,  recommending holes and opportunities that the defense is showing us.”

McVay is on the grind to perfect and hone his craft in any way possible.

“Miles training is really intense. Although he is currently a seventh grader, Miles is consistently competing with and dominating most high school D-lineman, and this is a direct reflection of his off season workouts,” Boyd said. “Likewise, he travels across the nation to compete against players from different regions to ensure that he is on path to earn a Division I scholarship from a Power 5 conference.”

Boyd explains why he compares McVay to this Hall of Fame member.

“In my estimation, Miles most compares to the likes of Orlando Pace,” Boyd said. “Reason being is because he is smart, tough, physical, huge in stature, and he takes pride in his game.  Pace had an outstanding career at Ohio State University, the St. Louis Rams, and is now in the Hall of Fame; therefore, if Miles can continue to dominate as he is doing in his grade level, I don't see why he can't follow in Orlando Pace's footsteps.”

Meanwhile, McVay also patterns his play after the legend.

“He was an aggressive technician,” McVay said.

McVay is constantly striving for greatness in everything that he does.

“I want to be on the honor roll and have a choice of colleges I can attend for free,” McVay said.

Before the pros, McVay dreams of one day playing collegiately at Mizzou, Illinois, Stanford or LSU.

“I like their educational programs, playing styles, coaches, and locations,” McVay said.

McVay lists science as his favorite subject in school.

“I like chemistry so I can mix chemicals and become a superhero,” McVay said.

Boyd outlines the next areas of improvement for McVay.

“This is to be determined, however, our coaching staff is going to focus on the offensive lineman recognizing the defensive fronts, identifying the middle linebacker, and blocking second level,” Boyd said. “Likewise, it will be recommended that Miles strive to have at least one pancake block each game.”

Boyd believes the sky is the limit as long as McVay continues to stay hungry.

“Miles has all the potential to be a top 5 lineman graduating high school in 2023, an All-American in college, and a first round draft pick entering the NFL in the 2026 draft,” Boyd said. “This is all because of his tireless dedication.”