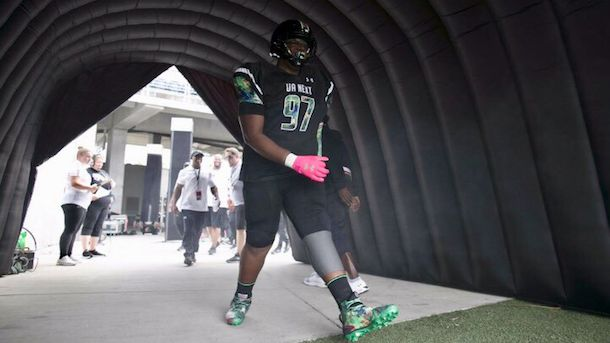 Among the rising stars in attendance was 2023 OL/DL Miles McVay, who has built a reputation as one of the elite Linemen from his class. McVay recently came in at #21 overall in Youth1's Elite101 rankings. For those unfamiliar, the Elite101 rankings have been a valuable resource for pinpointing the nation's absolute best athletes entering their 8th grade season.

Being invited to participate in the UA Next Game event is a prestigious honor that only a select number of 8th grade athletes receive. The experience and coaching the players received while at the event is second to none.

"I was honored to be invited," McVay told Youth1.com.

"It felt good to see how I leveled up with other top players in my age from around the country, and competing to earn the starting left tackle position," he added.

The St. Louis, MO native is arguably the best lineman in his class. He enjoyed every bit of the perks that came with attending an Under Armour event.

"I love the freedom that was given to to us, our own hotel room, all the gear, meeting new players and seeing old players that I have played with at other camps," McVay said.

"My favorite part of the event was watching the high school kids go up and get their jerseys, cause there where a lot of my big brother players from St. Louis," he added.

McVay was a member of Team Reed, coached by NFL legend Ed Reed. McVay played a big role in his team's victory over Team Clark, as he did a great job of protecting his QB and clearing running lanes for his running backs.

Going into the game, McVay said his mindset was to show that his hard work is paying off.

"Don't get exposed, and play my game and show how all my training and hard work was paying off for me," McVay said of his mindset going into the UA Next Game.

Overall, McVay was very pleased with his performance.

"I felt my performance was pretty good. I felt like I did my best in pass protection making my QB feel safe and setting a tone," McVay said.

With his success on the field, the future is bright for Miles McVay. His ability to impact the game on both sides of the line is beyond his years. He vows to continue putting in the work.

"I am growing everyday, I am starting to believe in my training and trust that if I do what I was taught i will win every battle," McVay said of his progression.

"My most recent personal accomplishment was being invited to attend the EDGYTIM EFT Underclassmen High School Showcase in Chicago and being named one of the Top OL/DL Performers by 247Sport and RIVALS," he added.

As he prepares himself for the next level, McVay has some areas of his game he plans to improve upon.

"I am working on hand placement, footwork and play consistency," McVay said.

"Just proving I can do it in high school. I have some big shoes to fill. Achieve a scholarship offer and staying on the honor roll," he added.

2023 OL/DL Miles McVay is among the best talents from his class. He's definitely a talent to watch from here on out.

"It made me hungry. UA Next gave you just enough to make you feel special, but they also showed us we have a long way  to go to be Under Armour All Americans," McVay said.

"I watched the high school players, and they showed me where I want to be in four years."

For more on Miles McVay, check out his Youth1 Player Profile -> here.

For more on the UA Next Game, check out the Top Performers -> here.