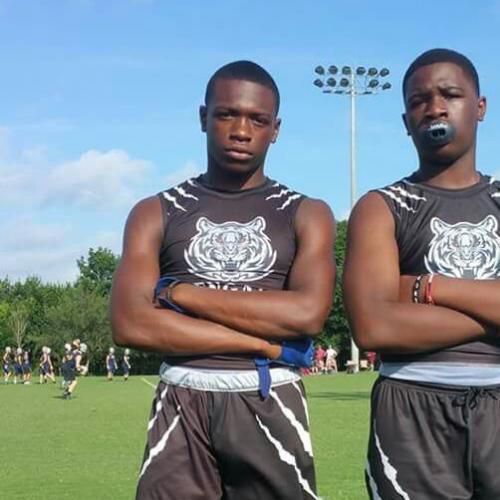 Jhalyn Bailey is one of the best players from the Houston, Texas area in the Class of 2022.

The 6-foot, 175-pound Bailey, who attends Klein Forest High School, is a talented player that works as a wide receiver and defensive back.

Bailey has earned plenty of accolades from his time as an athlete so far, such as being named MVP, Defensive MVP, Offensive MVP and Super Bowl MVP of his league.

Bailey is humbled by the recognition.

“It means a lot because I’ve been working to improve my craft, my leadership and my skills,” Bailey said. “So to be recognized and rewarded for it makes me want to keep striving for success and pushing myself to the limit.”

No matter the opponent, on each snap Bailey is determined to give it his all.

Bailey is going all out.

The motor is always at full throttle whenever Bailey steps between the lines.

“I want to perfect my craft, to explode out of my routes to create separation and attack the ball at the highest point,” Bailey said. “To rack up yards after the catch to put my team in the best position to score.”

Bailey has great passion and energy whenever he’s on the gridiron. Bailey tells why he enjoys the game of football so much.

“I love the game period,” Bailey said. “How dedicated players are to the game and mostly how it changes people’s lives in a heartbeat.”

Bailey has learned many valuable lessons from playing football that he applies to his everyday life.

“It taught me mostly to always be a leader on and off the field,” Bailey said. “To love and be 100 percent committed to anything in life and work hard for what you want.”

“When I played my first football game at six years old and scored my first touchdown,” Bailey said. “After that I knew I had to keep striving for more in the future.”

Wayne Edwards has coached Bailey for one year with the Texas Footwork Bengals.

Bailey takes his role as one of the leaders on the team very seriously. Bailey makes sure he’s a daily positive influence on his peers.

“I demonstrate leadership by disciplining and influencing others in the good and bad moments. Most of all I try to lead by example,” Bailey said. “The best advice I give is to always be a leader on and off the field. Also help others while you’re improving yourself. Never make anyone feel left out.”

Edwards adds that Bailey is one of those consummate teammates that every squad needs to be successful.

“Jhalyn is a vocal leader that steps up to the challenge,” Edwards said. “From making defensive calls on the field to encouraging his teammates from the sideline, he is aware of his impact and uses his influence to get the best out of his teammates.”

Bailey is appreciative of having amazing male role models that are supportive.

“My coaches have helped make me a better player and person,” Bailey said. “I have learned life never goes in a straight line. Everybody and everyone will have their downfalls, but when you are down you have to have the same confidence and attitude as when you are up.”

Edwards is an advocate of Bailey’s capabilities.

“Jhalyn has made countless plays for us this season hence the nickname Cheat Code,” Edwards said.  “Some of the plays he makes from pick-six interceptions to big catches for long touchdowns, defy explanation. He is almost guaranteed to make a big play in the pivotal moments of any game on either side of the ball.  In both championship games for us this season, he left his imprint on the game with long touchdowns of over 30 yards and had big interceptions bringing several back for scores on defense.”

In addition to making clutch plays, Bailey also has a high level of football IQ as well.

Bailey has excellent football awareness that puts him in position to thrive.

“It's rare for such a physically gifted athlete to play with such a high IQ,” Bailey said. “But this young man plays the game from the neck up and often bates quarterbacks into making ill-advised throws over the middle where he takes advantage of his explosive breaks on the ball to force turnovers and pass break-ups.”

Bailey is on the grind to perfect and hone his craft in any way possible.

“Jhalyn's work ethic is second to none,” Edwards said. “He works at both Texas Footwork to enhance his skills and under the tutelage of his father who has coached little league football for years.”

Edwards explains why he compares Bailey to these players.

“Safety - Jhalyn reminds me of the late great Sean Taylor, his range of ability and athleticism coupled with speed, size, and physical nature make him a unique talent,” Edwards said. “Wide Receiver - Offensively, he reminds me of Julio Jones because of his strong hands, size, and speed.”

Bailey is constantly striving for greatness in everything that he does.

“I want to make it to the NFL and have a long, successful career. To win Super Bowls and be a great player,” Bailey said. “Off the field I want to make my family proud of the kind of person I am.”

Edwards outlines the next areas of improvement for Bailey.

“Areas of improvement would include his hip movement to rely less on his athleticism in coverage and better track plays over the top,” Edwards said. “He will improve over time, he is new to the safety position but shows tremendous upside.”

Edwards believes the sky is the limit as long as Bailey continues to stay hungry.

“He is undoubtedly a Division I athlete that could blossom into a top SEC caliber prospect on either side of the ball,” Edwards said. “Expect big things from this young man in the future.”