2020’s Giovanni Gordon is being compared to Kam Chancellor

2020’s Giovanni Gordon is being compared to Kam Chancellor 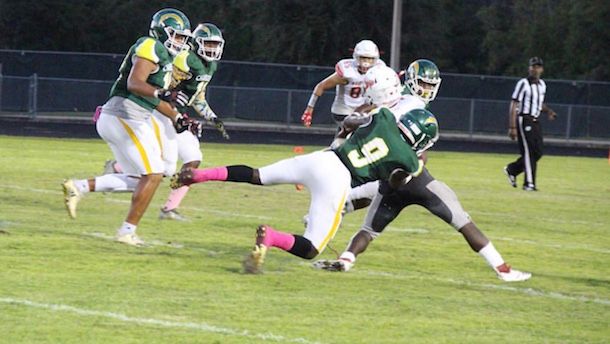 Giovanni Gordon is one of the best players from the Orlando, FL area in the Class of 2020.

The 5-foot-11, 173-pound Gordon, who attends Liberty High School, is a dynamic player that works as a safety and outside linebacker.

Gordon has earned plenty of recognition during his outstanding youth career, such as being selected as a First-Team All-County defensive back.

Gordon is humbled by the accolade.

“The meaning of the recognition for these awards is a good feeling but also it makes me more hungry and wanting to go and grind even harder so I can achieve more,” Gordon said. “It also teaches me to be humble and not so cocky as if I’m better than the rest.”

No matter the opponent, on each snap Gordon is determined to give it his all.

Gordon is going all out.

The motor is always at full throttle whenever Gordon steps between the lines.

“My mindset at playing safety is really to just go out there and clear my mind, loosen up, fly around to the ball and don’t let any deep plays get thrown on me,” Gordon said.  “I want to make the opponent have to work for everything they get.”

Gordon has great passion and energy whenever he’s on the gridiron. Gordon tells why he enjoys the game of football so much.

“The reason I love playing football so much is to enjoy it with my brothers and win,” Gordon said. “But also have my parents watch their son play and do great on the field because really my main ‘why’ for playing football is so that I can go to school for free and be able to take care of my family the way they took care of me.”

Gordon has learned many valuable lessons from playing football that he applies to his everyday life.

“Football has taught me so much about life in general,” Gordon said. “For example that you should not be a quitter because quitters only keep starting stuff that they can’t finish because they having a losing mindset of not being able to finish. So no matter the circumstances your under always have the mindset and mentality that you will succeed and finish. That is what life is all about: challenges. It’s really just God testing you. Will you sit there and be a quitter and let them overtake you? Or will you be a champion and overcome these challenges and obstacles?”

“My favorite memory of playing football is actually going to practice every day with this year’s team and coaching staff because as little as we noticed they really made football fun and put the love of it into us and helped us understand and play the game so much better,” Gordon said. “And also when I’m at practice I feel like I’m at my home away from home with all my family that I know I can count on.”

“His best part of his game is his tenacity and physicality. He is a bulldozer with a Ferrari engine,” Johnson said. “Gio has great ball awareness and like I said, he is flat out fast. He breaks on the ball. If he breaks on the player be prepared for a collision.”

Gordon takes his role as one of the leaders on the team very seriously. Gordon makes sure he’s a daily positive influence on his peers.

“How to demonstrate being a good teammate is really to be a selfless teammate and a opened minded person as well as being very caring to help out if they aren’t in the same situation as you,” Gordon said. “My best advice that I have given my teammates is to always go 110 percent on every rep you take, whether it is practice or a game because you never know who is watching you.”

Johnson adds that Gordon is one of those consummate teammates that every squad needs to be successful.

“He’s a player that definitely leads by example and through his actions,” Johnson said. “That has a contagious effect on the rest of the team.”

Gordon is appreciative of having amazing male role models that are supportive.

“What I learned from coaches about being a better football player and person is to be coachable and disciplined and always be 110 percent if its either on the field or real world situations,” Gordon said. “The best advice the coaches have given me was to be a selfless teammate and not selfish because there could be people on your team homeless and not able to eat so take care of others first before yourself.”

Johnson is an advocate of Gordon’s capabilities.

“Gio has had so many hustle plays it is hard to pick one. He is always around the ball causing either a fumble, pass break up or sack,” Johnson said.”When you see him rush off the edge it is so explosive.”

In addition to making clutch plays, Gordon also has a high level of football IQ as well.

Gordon has excellent football awareness that puts him in position to thrive.

“He studies Hudl and listens in our team meetings,” Johnson said. “He is smart and understands coverage to take away spacing.”

Gordon is on the grind to perfect and hone his craft in any way possible.

“Gio is a hard worker. He stays in the weight room and he lifts heavy,” Johnson said. “He understands what it takes to build the player he wants to be. He puts in the time to shine.”

Johnson explains why he compares Gordon to this player.

“Gio is a Kam Chancellor. Hard hitter, fast and super physical. He is a force,” Johnson said. “He plays with a chip on his shoulder. He is always on go.”

Gordon patterns his mentality after these standouts.

“There’s really two main players that I look up to that plays safety and that’s Derwin James and Karl Joseph. The reason I look up to them is because they are a hybrid just like me of playing safety and linebacker. They are just very athletic and make plays every time no matter where they are at on the field,” Gordon said. “That’s one thing I joke around with Coach is that wherever you put me at on the field I promise I’m going to dominate the person lined up in front of me. That’s what I like so much about these two players is that no matter the team they play or obstacles that come their way they had a succeeding mindset and now both of them are playing at the pro level of football.”

Gordon is constantly striving for greatness in everything that he does.

“I want to be one of the best safeties now for Central Florida and get better and bigger so I can be an all-around athlete on the defense as well. I would like to have the most tackles next year or at least be in the top three and also I want to be the strongest DB in Osceola County or Central Florida,” Gordon said. “I want to be a better all-around person, more caring, more loving and kind person to people. So I can hopefully make a positive impact on people’s lives and help them achieve their goals as well. Academics wise I want to have over a 3.0 GPA and just do my best in all my classes and graduate so I can walk across the stage and tell my family that after four long years of hard work it all paid off because their son is going to college.”

Gordon has his sights set on attending one of these two schools.

“My dream college to play at would really be FSU or West Virginia because that’s where both of my role models went and I believe and know if I went to either schools I would perform my best for those 3-4 years and give those coaches my all,” Gordon said. “ I would show them why picking me was a great option and that I’m not a quitter and I never let anyone outwork me either on or off the field.”

Gordon lists reading as his favorite subject in school.

“I read all the time to expand my vocabulary and comprehension on a lot of things. I usually read a lot of adventure novels or autobiographies of football players or athletes in general,” Gordon said. “Reading has really helped me a lot. It’s actually one of the reasons why I’m labeled as a gifted student in school.”

Johnson outlines the areas of improvement that will take Gordon to the next level.

“We are working to improve his read time and overall generalship. We are leaning on him as a rising senior to anchor our defense,” Johnson said. “Gio’s offseason work with our 7v7 team will increase his read proficiency and leadership.”

Johnson believes the sky is the limit as long as Gordon continues to stay hungry.

“Gio will be highly recruited next year. He is a true warrior between the lines,” Johnson said. “He is a great young man and will make his family and school very proud.”