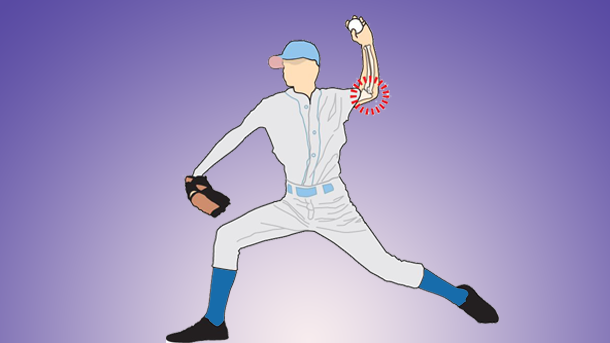 Whenever the doctor utters the four dreaded words “torn ulnar collateral ligament,” it may seem like the end of the world to an athlete. A torn ULC is an injury that at one time meant the end of a pitcher’s career, until Tommy John surgery became an effective remedy. Tommy John is known as an expensive surgery that has a long and painful recovery time. Many people hear the name and immediately think of the worst.

As a former pitcher who has had the procedure done I’d like to shed some light on the subject for coaches and athletes in youth baseball.

Tommy John surgery repairs a damaged ulnar collateral ligament in the medial elbow by taking a tendon from another part of the patient’s body, for example their hamstring. The surgery got its name in 1974 when a former  Dodgers’ pitcher became the first player to undergo the procedure. His name, you guessed it, Tommy John.

The surgery itself is very successful. Around 80% of pitchers return to their previous level of competition after the surgery. While there are exceptions, if you follow the rehab protocol correctly, you can return feeling as good as new.

On average, it takes a pitcher 12-16 months to return to the mound. It could be more or less depending on how your body reacts. It always hurts to miss time away from the game you love but for Major Leaguers it is a year away from, possibly, a long career. It is harder to swallow when a youth or high school player is missing a year of action.

Tommy John is becoming more frequent for young athletes. From 2007-2011, the number of surgeries increased by nine percent each year among high school pitchers. During that time, more than 50 percent of all Tommy John cases were on athletes 15-to-19 year-olds. This can be devastating to the parents and players for having to go through this at such a young age but it can be done.

I began pitching in Little League where they kept you on an innings limit. It began at two then rose to three then once moved to the bigger field, the innings limit was no more.

Being a two sport athlete in high school, I only focused on baseball in the spring. Fall was my offseason and the winter was basketball season. During the season, I played the field in addition to pitching. I was used as a starter and a reliever so I was pitching twice a week on average. The level of discomfort was never serious.

After high school, I decided to play for Marywood University. It was more throwing than my arm was used to. Pain began in the fall of my freshman season and only got worse.

I was given the news that I had a torn UCL in December of 2014. Tommy John followed shortly after in February of 2015. The surgery itself took about two hours. When I left the hospital, my arm was wrapped to where I could not move an inch.

After a week in that, the doctors moved me into a brace that controlled my range of motion. I was in that brace for five weeks. When that was removed, I was on my own. Motion was still not full but it was enough to where I did not need any help. At first, it is hard to even hold up your arm on your own but that changes quickly.

I missed my entire sophomore season and was going to rehab three to four times a week trying to get back on the field.

Rehab was long and hard but it is a crucial part of the process. And it paid off. I was playing catch just four months after surgery in June, which is way ahead of schedule and by the fall season, I was throwing bullpens. Just eight months after surgery, I returned to the mound.

No one really knows why the number of surgeries is going up but many people have their own opinions. It could be that more kids are playing baseball year round and that puts more stress on the arm. It could be that the training is different. More players are focused on training their upper bodies with weight rather than their lower body.

It could be that nowadays people are too focused on mechanics instead of just going and throwing the ball like they have their entire lives. A change in mechanics that a player is not used to can cause awkwardness which could lead to discomfort.

There are many myths that have been developed about performance after Tommy John surgery that may be persuading athletes to get it done earlier in their careers, most of which are not true.

First, having this procedure done does not make you throw harder. A player may be able to gain a little velocity but that will depend on the level of rehab and conditioning.

Next, once you have the procedure done, you are not invincible to the same injury. Having Tommy John does not make a pitcher’s arm indestructible. There are many cases where players have had the surgery twice maybe even three times.

Lastly, pitchers are not the only ones who can get it. While they are way less likely, position players are not off the hook. The current number two prospect in the MLB, Yankees’ infielder Gleyber Torres, received word recently that he will need Tommy John.

I was asked many questions before I made my decision, is it worth it? What’s the point? Why are you going to put yourself through that? Well, the way I answered those questions was by thinking about my love for baseball, my ability to perform daily activities and my ability to play other sports.

Before surgery, the pain was to the point that I could not workout, go bowling or even shoot a basketball. So, part of my decision was beyond baseball but the main reason is that I did not want to stop playing. My options were either to have surgery or stop playing after one collegiate season.

I spoke to my parents, my coach and the team captain before I made my decision. All of them had the same answer and that was to get my elbow fixed and get back on the mound.

For young athletes out there who are thinking about getting it done, don’t let it be a spur of the moment decision. First, think about if it is really necessary. Rehabbing can help to strengthen the ligament but it will not completely fix it.

Next, do not do it because you think you will throw harder or have a rubber arm. Last but not least, do not let people tell you it is pointless because going pro is unlikely.

When I went for a second opinion, the doctor I saw did confirm that I had a tear in my UCL. After asking about taking the surgery route, he asked what my plans were and what level of baseball I am playing. He tried to steer me away from surgery because “the Yankees or Mets weren’t calling.”

Even after I told him the discomfort I experienced in doing everyday activity, he still opted against it. At the end of the day, professional status should not be a factor in your decision. It is all about how you feel physically.

Most importantly, athletes and parents, do not panic if you get diagnosed with a torn UCL. Always remember, it is not the end of the world.