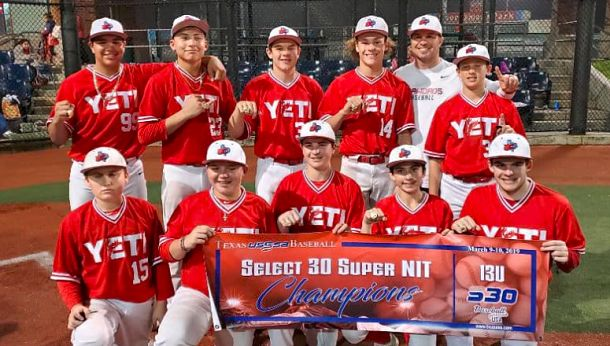 The Crawdads 13U by YETI Baseball Club (pictured above) kept its perfect USSSA season alive this past weekend after winning its fifth tournament in as many appearances throughout the fall/winter seasons. The Crawdads went 6-0 over two days of competition at the South Texas Select30 Super NIT outscoring opponents by a combined 56-12 margin. Manager Josh Sanders’ club is now 24-1 overall, including 11-0 In Class.

The South Texas Super NIT was one of the largest youth baseball events of the year. It attracted close to 400 teams spanning several different age groups and classifications. The 13U Major division featured 18 teams – from three states: Texas, Oklahoma and Louisiana. All were Majored classified with the exception of two squads, the South Texas Sliders and Premier Baseball- Campos. Format was nearly identical to other Super NITs – two game pool play into just one single elimination championship bracket.

YETI Baseball Club began its slate versus the aforementioned Sliders and made quick work of them. The boys from Austin won 14-1 in a run-rule shortened game behind the pitching of James Gatlin (3 innings) and Julius Ramirez (1 IP) and their explosive offense. The second pool game of the day was a whole different story. The Major classified Dallas Tigers- Bergman really presented a threat to the Crawdads. They pushed them into a one-run game but fell short 3-2. YETI Baseball used three pitchers, Reagan Chomel, Orlando Gonzalez and Lane Arroyos to navigate the tricky lineup. The Crawdads proved they can win in a pitcher’s duel or with their sticks.

The Crawdads earned top seed based on the pool games with a 2-0 record and highest average run differential (second tiebreaker metric). There were four other 2-0 teams, most notably their program-mates Crawdads-Red. The eventual champs earned a first round bye and matched up with Marucci Elite Texas-Greening who had defeated the Sliders 4-2 in the prior round. This wasn’t much of a game as the Crawdads plated 12 runs in a four-inning affair which ended 12-5. James Gatlin again threw three innings to begin the day and was relieved by one frame from Sage Sanders.

In the quarterfinals the Crawdads notched its first shutout of the weekend against the Louisiana Tigers Gold. The star of the game was starter Reagan Chomel who pitched five outstanding innings before giving way to Lane Arroyos who helped advance the top-seeds into the semis. In the next round the previously unbeaten Canes Southwest Scrappers who 4-0 to that point, fresh off a 3-2 triumph over the Texas Raiders. In the end, this was a great mismatch. The Crawdads demolished the Scrappers 12-1 and only needed to use one arm for four innings, Julius Ramirez, in the process.

The Crawdads were playing its fourth game in the same day when they lined up versus Derty Sports, a Major team with a 20-6 overall record from Pharr, Texas. Derty had been 5-0 in this Super NIT but ran into a buzz saw. The Crawdads won this lopsided affair 11-3 to hoist yet another banner and add to its resume.