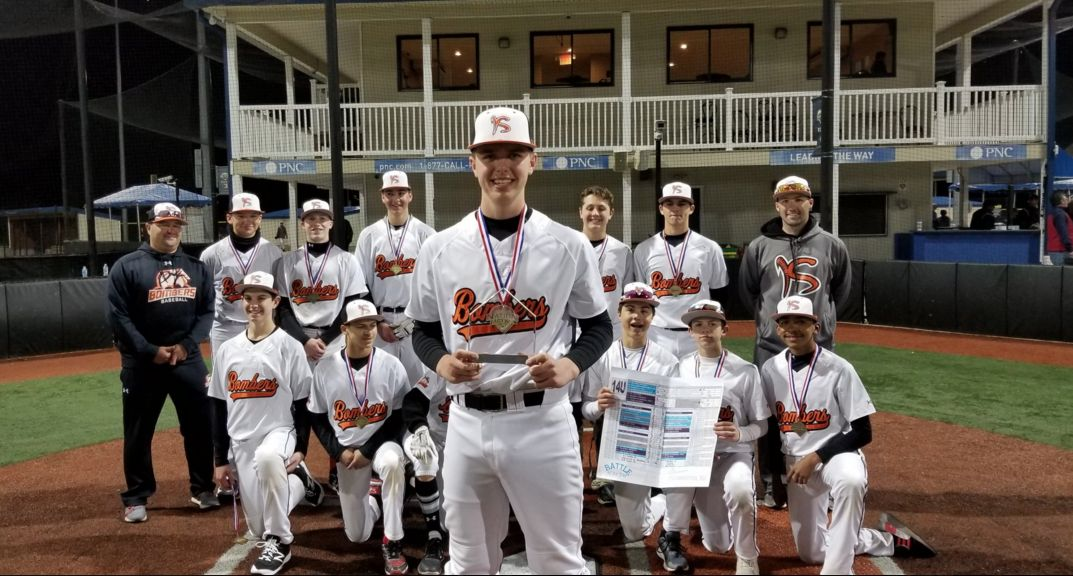 Long, lean Ben Shenosky showcased a bit of grit to go with overt natural ability as he scattered seven hits to lead the Keystone State Bombers to a 3-1 victory over the Diamond Jacks Super 14U in the Battle At The Turf 14U championship game on Sunday at Diamond Nation.

The 6-4, 205 pound Shenosky struck out four and walked two while stranding eight base runners in an entertaining pitchers duel with the Super 14U’s lefthander Truman Richter. Shenosky, who was named the tournament’s Most Valuable Player, extricated himself from bases loaded jams in the fifth and seventh innings.

Richter, meanwhile, carried a no-hitter into the visiting fifth inning before the Bombers bats came to life, producing three runs on three hits and a pair of walks. Richter issued a one-out walk in the first before retiring the next 11 batters in order.

But the Bombers cleanup hitter Nik Rubendall (2-for-3, run) led off the fifth with a hard single to left field that snapped Richter’s no-hit bid. It also proved a flash point for a Bombers rally. Caleb Sturtevant then drew a walk and the Bombers loaded the bases with none out when Michael Heckman’s pretty sac bunt attempt went for a single.

Richter struck out the next batter for the first out and had Brycen Flinton set up at 0-2, but the Bombers’ right fielder lined a single into left field to score Rubendall with the game’s first run. Shenosky then helped himself with a six pitch at bat that ended with an RBI walk. Richter struck out the No. 9 hitter for the second out but uncorked a wild pitch with Nate Uzelac at the plate as Heckman raced home with the third run of the inning.

“We’ve played well,” said Bombers coach Shaun Vernesoni. “We beat the No. 29 ranked team in the country earlier and we’re 9-1 this spring.”

The Diamond Jacks answered with a rally of their own in the bottom of the fifth. Andres Suarez drew a leadoff walk and singles by Hawkins Sutter and Nick Bergamotto loaded the bases with one out. Shenosky got Matty Wright to bounce into a force-out at second as Suarez crossed the plate with the Diamond Jacks’ first run of the game. The lineup flipped to the top for the Super 14U but Wright (1-for-2) was erased at second on a steal attempt to squelch the threat.

“I was terrified,” said Shenosky of his predicament in the fifth. “I’ll admit that. But I was confident if I got a groundball my defense will do something good with it.”

The big righty would take matters into his own hands to tamp out an even bigger fire in the home half of the seventh.

Chris Maldonado (1-for-2, walk), the Super 14U’s shortstop and No. 3 hitter, singled through the middle leading off the seventh. But Shenosky got two quick outs on a fielder’s choice grounder and a strikeout. The Diamond Jacks, however, kept digging. Suarez singled to center and Alex Kim beat out a slow bouncer in the middle of the diamond to load the bases.

Shenosky ratcheted up the intensity, though, throwing just four pitches to the next batter, the last of which was a big time heater for strike three and the championship for Keystone State.

“Ben is very composed,” said Vernesoni. “And we handled adversity very well.” Vernesoni was referring to his team’s ability to shake off a pair of two-out errors in the second to keep the Diamond Jacks off the board into the fifth. “We preach how important it is how you respond to adverse things that happen to you.”

The West Chester (Pa.) Dragons defeated the Richmond County Baseball Club Nationals, 6-1, in the 9U Battle At The Turf championship game. The Dragons (3-0) outscored their opponents in dominating fashion, 24-6. The Dragons’ Tyler Ryan was named the tournament MVP.

The Brooklyn Blue Storm cruised to a 13-6 victory over the Richmond Titans in the 11U Battle At The Turf championship game. The Blue Storm (5-0) amassed 49 runs to its opponents’ 14. The Titans (3-1) were dominant too, until running into the Blue Storm. The Titans outscored their opponents 36-16. The Blue Storm’s Aiden Ruiz was named the tournament MVP.

Wladyka Baseball edged the New City General Blue, 2-0, in the 12U Battle At The Turf championship game. Wladyka shut down a rugged New City team that had scored 60 runs in its first four tournament games, all wins. Wladyka boasted a 46-12 runs advantage on its opponents. Wladyka’s Jamie Zee was named the tournaments MVP.

The Diamond Jacks Super 13U kept its undefeated spring record intact with a nail biting, back-and-forth struggle of an 8-7 victory over the Richmond County Baseball Club Nationals in the 13U Battle At The Turf championship game. The Diamond Jacks (5-0) outscored their opponents 46-16 while the Nationals (4-1) held an equally impressive 43-13 runs advantage on their tournament opponents. The Diamond Jacks Ryan Jaros, who hit a three-run home run in the final, was named the tournament MVP.