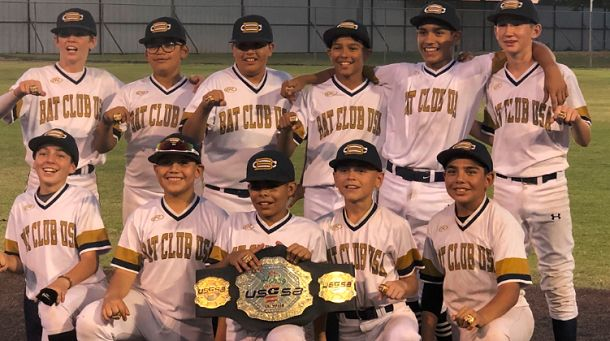 Bat Club USA Wolfpack 12U (pictured above) from El Paso, Texas, won its third consecutive USSSA tournament title this past weekend at the Last Chance for Rings Global World Series Qualifier. Manager Mando Ontiveros’ club went 4-0 and outscored opponents by a 45-7 margin overall to boost its record to 37-8.

The Last Chance for Rings event, which took place in Hobbs, New Mexico, attracted 13 teams in the 12-Open division. The youth squads hailed from either the host state or neighboring Texas and were classified across several groups. The format was a two game pool schedule for each of the teams before a split single elimination bracket. The top seven teams based on pool record and average runs allowed were placed into the Gold Bracket while the remaining went sent into the Silver Bracket.

Bat Club USA smashed the AA Seminole Indians in the opening game of the tournament, 11-0. Ontiveros was able to rest some arms as they only needed to complete three innings in a mercy-rule shortened game. Mark Rodriguez pitched two innings for the winning side and Matthew Hall contributed with a single frame.

The second game of the day was even more lopsided for the Wolfpack as they trounced another 12-AA team, the Revolution from Carlsbad, New Mexico. This tilt ended up being extremely one-sided with a final score of 21-1. Aiden Rizo pitched two innings followed by one each from Brandon Gomez and Gilbert Beltran.

These two blowout victories positioned the Wolfpack well for a deep tournament run and earned them the top overall seed. There were three other squads who finished the first round unblemished at 2-0: Titans Baseball, West Texas Bandits and the West Texas Young Guns.

By virtue of that No.1 overall seed, Bat Club received a key benefit, a bye in the first round of the bracket phase. Instead of having to win three consecutive elimination games in one day, the boys from El Paso had to win one fewer which allowed the manager to save arms and innings.

After advancing directly into the semifinals, the Wolfpack took on Different Breed from Odessa, Texas. They went 1-0-1 in pool play and upset the Young Guns 12-2 in the first round. Bat Club played its closest game of the Global World Series by far but still prevailed 5-2. This test of competition prepared them well for a finals matchup against Titans Baseball (3-0) who beat the Rouge Warriors 5-4 and Hobbs Oilers 6-5 in the first two rounds.

The Wolfpack would double-up the AAA classified Titans from Big Spring, Texas, 8-4 and notch its fifth 1st or 2nd place tournament finish in 2019. Keep an eye out for this team as the season gets deeper, they are hitting their stride at the right time and are 17-1 in its last 18 games.