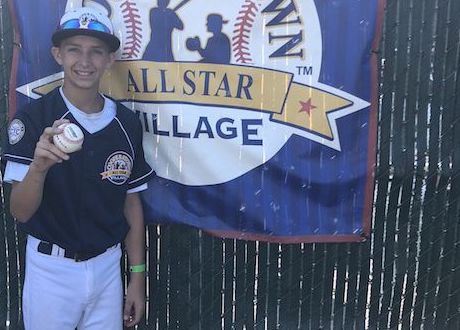 Zach Hopper is one of the best players from the Orlando, FL area in the Class of 2024.

The 5-foot-6, 112-pound Hopper, who attends Lake Nona Middle School, is a dynamic prospect that works as a second baseman, shortstop and pitcher.

During his outstanding youth baseball career, Hopper has already received plenty of recognition, such as: MVP Perfect Game Tournament (2017), USSSA All American Team (2016).

Hopper is humbled for the opportunities to showcase his skills.

No matter the opponent, on each play Hopper is determined to give it his all.

Hopper is going all out.

The motor is always at full throttle whenever Hopper steps between the lines.

“My mindset as a second baseman or shortstop is that I want the ball to get hit to me in order to make the play,” Hopper said. “As a pitcher, my mindset has always been hitting my spots.”

Hopper has great passion and energy whenever he’s on the diamond. Hopper tells why he enjoys the game of baseball so much.

“I really love hitting and spending time with my teammates,” Hopper said. “The moments we share together means a lot to me.”

Hopper has learned many valuable lessons from playing baseball that he applies to his everyday life.

“Baseball is a game of ups and downs,” Hopper said. “You will have good days overall and some not so good days.  You will never be perfect.”

“Thus far, it’s been my first home run at a Disney All American Showcase in 2016 and most recently the Cooperstown All Star Village Tournament obtaining 2nd place and hitting 4 home runs,” Hopper said. “During my pool play pitching I had 10 strikeouts to contribute to my team win.”

Mr. Hopper explains the best parts of his son’s game.

“He’s a very smooth fielder and mixes the speed of his pitches well,” Mr. Hopper said. “He has tremendous fundamentals which provides him with the foundation to be successful on the field.”

Hopper takes his role as one of the leaders on the team very seriously. Hopper makes sure he’s a daily positive influence on his peers.

“I demonstrate being a good teammate by developing a friendship on and off the field for sure and picking a teammate up when they get down,” Hopper said. “I tell my teammates to work hard at every practice and during the games give it your all.”

Mr. Hopper adds that his son is one of those consummate teammates that every squad needs to be successful.

“He gets his teammates involved. He keeps the team excited and the dugout loud,” Mr. Hopper said. “His energy is contagious to the rest of the team and everyone feeds off of it.”

Hopper is appreciative of having amazing male role models that are supportive.

“I’ve learned from my coaches to don't let the little things get the best of you, always work on the mental aspect of the game,” Hopper said. “They tell me to be a leader and control my emotions on the field.”

Mr. Hopper is an advocate of his son’s capabilities.

“He has pitched shutouts numerous times in championship games,” Mr. Hopper said. “He constantly comes through for the team in crucial moments and situations. He’s fearless and locked in all the time.”

In addition to making clutch plays, Hopper also has a high level of baseball IQ as well.

Hopper has excellent awareness that puts him in position to thrive.

“He always knows where to go with the baseball. He has a very high baseball IQ,” Mr. Hopper said. “That’s a major reason he’s been able to accomplish the things he has in his career.”

Hopper is on the grind to perfect and hone his craft in any way possible.

“His work ethic is excellent. He always wants to get better in every way,” Mr. Hopper said. “He practices hitting twice per week by himself and works out in the gym twice per week.”

Mr. Hopper explains why he compares his son to this player.

“He’s very much like Chase Utley,” Mr. Hopper said. “He plays great defense at second base and hits for average and power.”

Hopper patterns his style of play on the mound after this Cy Young winner.

“A player I look up to is Clayton Kershaw,” Hopper said. “Because of his ability to go out there and compete with his pitching against good hitters.”

Hopper is constantly striving for greatness in everything that he does.

“I want to continue to get good grades, receive an excellent education and play baseball at the highest level that I can against top teams,” Hopper said.

Before the pros, Hopper dreams of becoming the next great collegiate star.

“Right now it would be any D1 school for baseball.  I want to play at a high level,” Hopper said. “Anywhere that gives me the best chance to play professionally.”

Hopper lists math as his favorite subject in school.

“It is a natural subject that I enjoy doing,” Hopper said. “It’s a subject that is very important in the real world.”

Mr. Hopper outlines the next areas of improvement for his son.

“Mental focus and not getting down on himself when things aren't going well,” Mr. Hopper said. “But he’s still young and has time to develop that. Once he does, he’ll be even more dangerous.”

Mr. Hopper believes the sky is the limit as long as his son continues to stay hungry.

“He can go as far as his hard work will take him,” Mr. Hopper said. “It's all about the goals he sets for himself.”