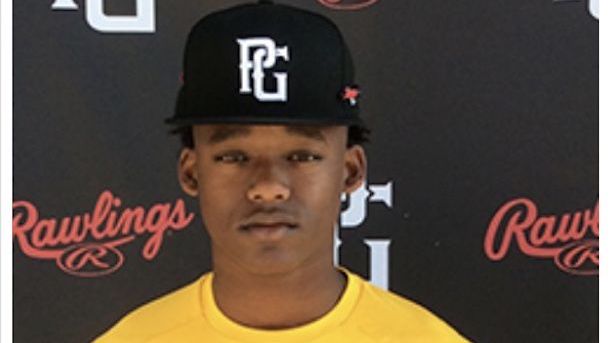 Elijah Green is one of the best players from the Orlando, FL area in the Class of 2022.

The 6-foot-1 Green, who attends Sunridge Middle School, is a dynamic prospect that works as a center fielder and right-handed pitcher for FTB Select.

During his outstanding youth baseball career, Green has already received plenty of recognition, such as being a Perfect Game Top Prospect.

Green is humbled for the opportunities to showcase his skills.

“The award means my hard work is paying off and it motivates me to want to continue working hard,” Green said.

No matter the opponent, on each play Green is determined to give it his all.

Green is going all out.

The motor is always at full throttle whenever Green steps between the lines.

Green has great passion and energy whenever he’s on the diamond. Green tells why he enjoys the game of baseball so much.

“I really love hitting and tracking down balls in the outfield,” Green said.

Green has learned many valuable lessons from playing baseball that he applies to his everyday life.

“Playing baseball has taught me how being around other guys and their mindset can teach me things about life,” Green said.

“When I was eight years old I hit a grand slam to win the game,” Green said. “It felt great. He was a decent pitcher too. I just wanted to get the ball in the air somewhere to tie the game.”

Jeff Hoyle has coached Green for six years, first with the Central Florida Wolverines and now with FTB Select.

“He has great speed and a strong arm. Those qualities are very important for a player at his position,” Hoyle said. “He has great footwork with drop steps and going back on balls. Getting through balls and throwing runners out who are trying to advance is another strong point of his.”

Green takes his role as one of the leaders on the team very seriously. Green makes sure he’s a daily positive influence on his peers.

“I demonstrate being a good teammate by trying to give advice with what they should be doing,” Green said. “When the coach is getting on a teammate I’ll tell them ‘You’ll get it next time, kid,” or like ‘You got this.’”

Hoyle adds that Green is one of those consummate teammates that every squad needs to be successful.

“He encourages players who struggles and after I have gotten on to a player, on a few occasions, it's Elijah who I see that puts his arm around them and tells them to shake it off and keep their heads up,” Hoyle said.

Green is appreciative of having amazing male role models that are supportive.

“My coaches have definitely helped me with my leadership and how I play the game,” Green said. “They tell me to keep my mind off girls and keep your head in the game.”

Hoyle is an advocate of Green’s capabilities.

“Over such a long period of time there are so many examples, especially at the plate but the most recent play he made was this catch in a Perfect Game Championship game we played recently and this ball was crushed over his head,” Hoyle said. “I'm thinking possible inside the park home run, and as that ball sailed over his head, he turned and took off, closing the distance, picked the ball back up and caught over his shoulder, almost all the way turned, similar to [Willie] Mays.”

In addition to making clutch plays, Green also has a high level of baseball IQ as well.

Green has excellent awareness that puts him in position to thrive.

“In that circus catch, he had the IQ to pick the ball off the bat, predict where and in which direction the ball will travel, take his eye off it and run in that location and make the catch,” Hoyle said.

Green is on the grind to perfect and hone his craft in any way possible.

“At an age where so many kids have so much going on in their lives, to say a 14U kid is at every practice is almost unheard of,” Hoyle said. “However, Elijah is there every day, trains with his father, former NFL first round pick, every week on his off days as well as hitting weekly with an instructor or his father.  Once a month or more we also have four hour outfield only practices.”

Hoyle explains why he compares Green to these baseball legends.

“Consistency and play, and the way he carries himself is like Bernie Williams,  with raw power like Bo Jackson, and runs and creates excitement like Ricky Henderson,” Hoyle said.

Green patterns his style of play after this two-time AL MVP center fielder.

“A player I look up to is Mike Trout, definitely,” Green said. “I like how he robs all those balls in the outfield and his leadership.”

Green is constantly striving for greatness in everything that he does.

“My goals are to definitely make it to the MLB, stay out of trouble and make my family proud of me on and off the field,” Green said.

Before the pros, Green dreams of becoming the next great Florida State or Florida player.

“They have really great baseball programs and I can see myself making an impact at either school,” Green said. “They also are excellent academic schools too.”

Green lists math as his favorite subject in school.

Hoyle outlines the next areas of improvement for Green.

“Elijah has been a two sport athlete his whole life, so compared to every other player on his team, in reality he has only have had half the reps and live game experience as everyone else,” Hoyle said. “He has made great strides defensively in the outfield and he continues to get better.  And with more experience and live reads he will continue to excel.”

Hoyle believes the sky is the limit as long as Green continues to stay hungry.

“Elijah is a 5 tool player who controls his own destiny,” Hoyle said. “He has the talent and will to make all of his dreams come true if he stays the course.”