Baseball in Mars? You better believe there is | Youth1
Skip to main content

Baseball in Mars? You better believe there is

Baseball in Mars? You better believe there is 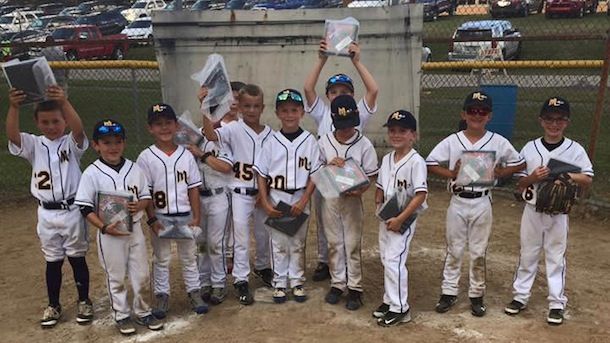 Mars Baseball President, Edwin Palmer, has heard the jokes before.

"They get to say they are going to Mars,'' Palmer joked.

Mars, Pennsylvania is not a big town. There is clearly a rooting interest in this town for the Pittsburgh Pirates. This suburb doesn't run away from it's name. They have a road side attraction entitled Mars: The Spaceship or Flying Saucer."

Palmer raised his family in Mars and spaced out his boys perfectly at 16, 14 and 12.

And then baseball entered the picture when his middle son turned seven-years-old.

"I was still coaching in-house baseball but we wanted to put together a travel team. So, we had tryouts in the summer."

Yes, it's grown. Palmer notes there are 450 players involved in the traveling Mars program.

"That's really a healthy number of kids. I really enjoy it very much,'' Palmer said. "We have so many volunteers. There is so much interest in the program."

For now, all is well in Mars. Yes, there is competition in place for other sports.

"Lacrosse is growing,'' Palmer noted. "I don't want to lose kids to the AAU, either."

Now, Palmer points out that the travel teams don't embark on long voyages. However, they did venture to nearby Ohio for a Ripken Tournament.

Now, that doesn't mean all kids stay local. Several Mars players managed to take a trip to Japan in the summer of 2016

"Our kids wanted to be more competitive,'' he said. "So, now we have indoor facilites in the winter."

In the in-house program, Mars engages players from tee-ball through American Legion baseball. In the first few years, coaches pitch to the players to save wear and tear on those pitching arms.

With a growing organization like this one, there is a call for help in the community.

"We need to rake fields,'' he said. "Most of our volunteers are the parents. One thing we know is it will always rain on opening day."

There have been successes in the past. In the summer of 2014, Manager Palmer and son, Brett, joined in on a World Series trip that took them to Virginia. That's where they ran into competition from Mexico and the Phillipines. Young Palmer nearly batted .700 for his dad's team.

When baseball season closes in Mars, the players head indoors to the Lakevue Athletic Club. The indoor faciity can house baseball players until the season kicks off.

"That's where we do our training and have our clinics,'' he said.

Mars baseball doesn't want to bankrupt its baseball players so it's just $225 for a winter's worth of indoor training. That includes a minimum of 10 sessions with professional coaches. Not only hitting, pitching and fielding are included but if the players dress accordingly, that is wearing their Mars gear, they will go home with a hoodie. Of course this comes with a warning: No horse play is accepted.