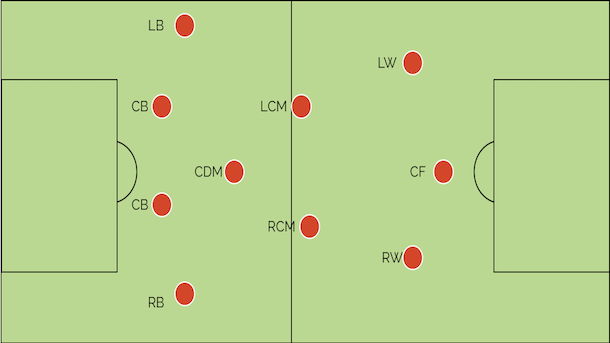 The 4-3-3 is great for teams looking to put an emphasis on scoring goals. The 3-player front line allows skilled attacking players to go head to head with isolated opposing defenders.

This formation is used by the likes of Real Madrid and Barcelona. The 4-3-3 highlights wing players who have speed and the ability to go 1-on-1 with defenders and the central midfielders who are strong in possession and have the ability to defend.

The 4-3-3 formation consists of a back four, three central midfield players, two wing players, and one center forward or Striker.

Similar to almost all formations that feature four players at the back, the 4-3-3 relies on the Left Back and Right Back, or Fullbacks, to join the attack while in possession. The Fullbacks should be constantly darting up and down the sideline. Their job consists of supporting the midfield and overlapping wing players to get into crossing positions, all while being disciplined enough to handle their defensive responsibilities.

The most effective way to use the 4-3-3 formation is to play the three Center Midfielders, or CM’s, in a triangle.  The most central player dropping slightly lower than the other two central midfielders to form the triangle. This player is known as the Center Defensive Midfielder or CDM.  The CDM should be the most defensive minded of the three central midfielders. An ideal CDM has the awareness to cut out the opposition's passes, the strength to win tackle , and the stamina to recover when their team loses possession. The CDM serves as a buffer between the midfield and defense, slowing down opposing counter attacks and allowing his team to recover. Furthermore, by taking up a more defensive position the CDM allows the the other two central midfielders to roam freely in the midfield and take up more attacking positions. From there the two other midfielders can play through balls for wingers and pick out their Striker. The other two central midfielders should have great vision, be gifted passers, be able to dribble in confined areas, and possess the ability aid the CDM in defensive situations.

The front line of the 4-3-3 is the focal point of the formation. The Right Wing (RW) and Left Wing (LW) often find themselves in space and situations where they can run at the opposition's back line with the ball. The wing players in this formation may be the most integral aspect to its success. Both wing players should have great speed, terrific timing when making runs behind the opposition’s back line, the ability to beat players while dribbling, accurate crossing, and a nose for goal.

When selecting the starting lineup coaches should consider whether they want the RW to be left or right footed and vice versa. This decision should take two variables into account. First, the role of the center forward or striker in the team, and second the wing players’ individual ability.

If a team plays with a traditional Striker, they may want to put a right-footed player at RW and a left-footed player at LW. Reason being traditional Strikers are typically talented at finishing crosses and beating defenders in the air to score goals. Having wing players positioned on the side of the field that matches their footedness encourages wingers to beat their defender 1-on-1 down the line and use their strong foot to pick out the Striker with a cross.

On the other hand, if the wingers have the ability to score more goals than the Striker the best option may be to play a right-footed player at LW and vice versa. This allows both players to cut inside towards the goal and shoot with their strong foot. The Striker in this strategy still looks to receive the ball in the box and score, but he can also defer the goal scoring responsibility to the LW and RW.  A great example of this Real Madrid who play Cristiano Ronaldo, a righty, at LW and Gareth Bale, a lefty, at RW.